Truth and Opinion. A letter to John Eliot Howard

"On Church Discipline and Christian Charity in their Relations to Supposed Error." 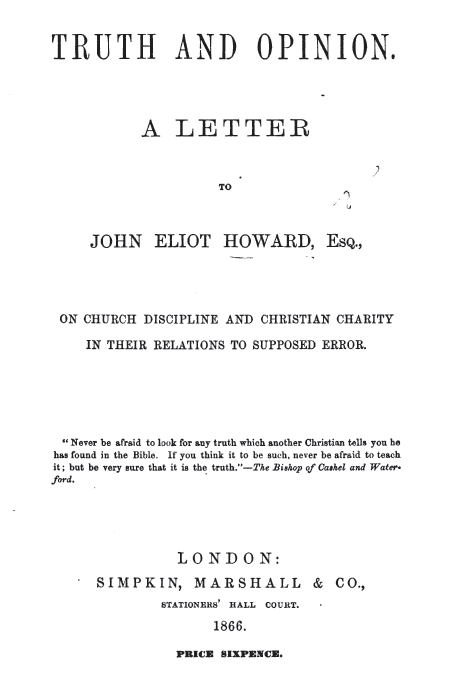 Tom said ...
I thought this was a very good pamphlet, well worth reading, both for the discussion on reception, and the distinction between truth and error later on in it.

A couple of quotes,

"Other references bearing on Church discipline are, however, not wanting. Let us note them carefully. We have Paul denouncing false teachers in these terms,—“If any man preach any other gospel unto you than that ye have received, let him be accursed” (Gal.i. 8). We have John adding, “If there come any unto you, and bring not this doctrine, receive him not into your house, neither bid him God speed: for he that biddeth him God speed is partaker of his evil deeds” (2 John 10, 11). We have Jude bidding us “ear nestly contend for the faith once delivered to the saints” (ver. 3). We have the Saviour himself, in the visions of the Apocalypse, declaring of the doctrine of the Nicolaitanes— “Which thing I hate” (Rev. ii. 15).

What language, you will say, can be stronger? Can it be right, you will ask, to call those who hold such errors brethren, or to commune with them at the table of the Lord? Again I reply, Certainly not. But why? Simply because all these false teachers either absolutely denied the great facts on which Christianity was based, or else repudiated its moral character altogether. Their doctrine was either utterly inconsistent with Christianity as a revelation from God, or else totally destructive of all moral principle. The denial that Christ had ever come in the flesh (the evil that John refers to), and “turning the grace of God into lasciviousness” (which was both the teaching and practice of the Nicolaitanes), were of this character. The errors of the Judaizing teachers were equally fatal to the Christian life, for they were subversive of Christianity itself. He who accepted the teaching of these troublers of the Church abandoned, not this or that doctrine merely, but everything that distinguished Christianity from Judaism.

But tell me, “Are these the things on which discipline among ‘the Brethren” is brought to bear? Is brother after brother excommunicated or driven away because he has ceased to be a Christian at all? Were these, or such like, the evils which were in tended to be met and remedied by the change from ‘latitudinarianism’ to “pharisaism’?” Assuredly not.

What then was the object of the discipline? Simply to enforce uniformity of opinion as to what Scripture actually teaches, or rather as to what may or may not be legitimately deduced from its revelations. Speculations regarding the experiences of the Saviour; given expositions of difficult passages in the Psalms; the acceptance or rejection of certain views on unfulfilled prophecy; the duty, or otherwise, of refusing communion with other Christians on account of supposed evils in their systems; these, and such like opinions —for they are nothing more—constitute the treasures of wisdom in defence of which unity has been destroyed, brotherhood set at nought, and Christ dishonoured before the world."

"I have done successfully, that the divisions so much to be deplored among ‘Brethren', the prevalence of a spirit of condemnation among them, and the absence of that tone of reconciling love which is so eminently Christlike, is to be traced, not so much to the ordinary infirmities of human nature as to the adoption of a theology, for mally unwritten indeed, but well understood, and supposed, though wrongly, to have been given by the Spirit of God; a theology which builds itself increasingly upon merely human opinions; which confounds these opinions with Divine truth; which supports them by a discipline at once anti-apostolic and fruitful of division; which keeps out of communion the many sincere and earnest souls who, in these days of ecclesiastical pretension, long for simple and spiritual worship, and which has placed before multitudes a stumbling-block in the path of Christian progress ... "
Thursday, Jan 22, 2015 : 09:51
Tom said ...
I don't know who the author is though .. There are a couple of references in this Newspaper http://newspaperarchive.com/uk/middlesex/london/nonconformist/1866/06-20/page-24 but I do not have a subscription to see if it might reveal anything!
Thursday, Jan 22, 2015 : 10:08