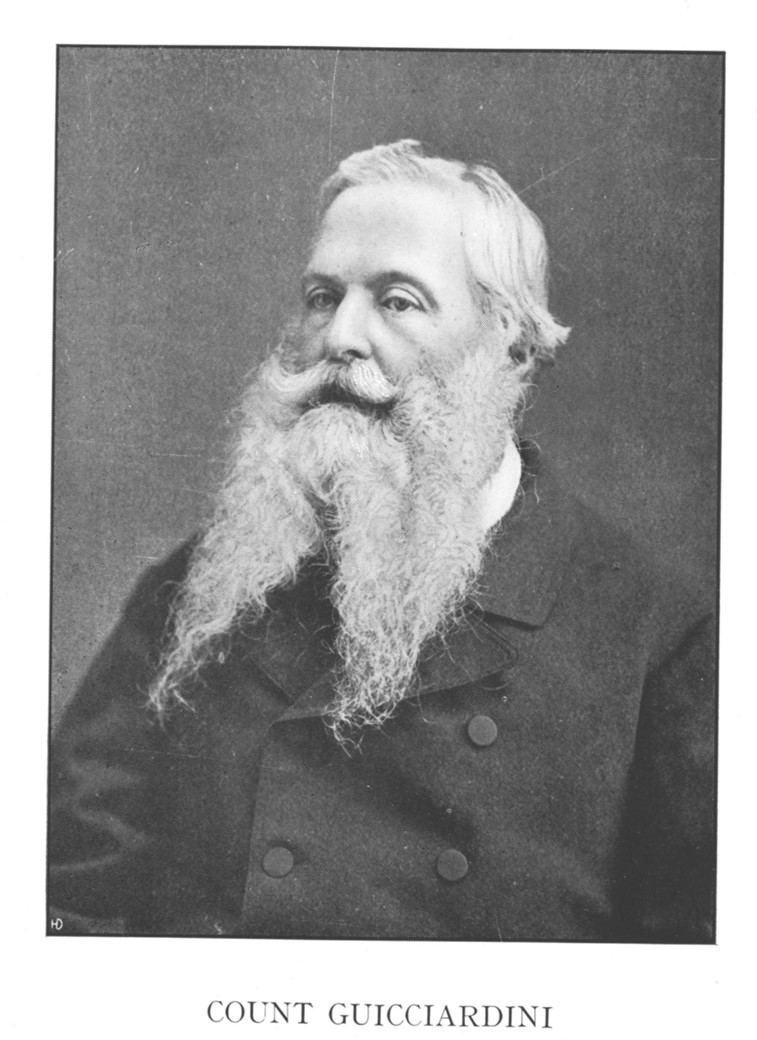 COUNT GUICCIARDINI was born on the 21st of July, 1808. He received the highest possible education, and had as one of his fellow-students the future Grand Duke of Tuscany. When the young Count had reached his twenty-fifth year a temporal wave of progress caused Leopold II to patronise a higher standard of education than had prevailed in Tuscany, and he called his friend Count Guicciardini to undertake the organisation of a better educational system. It was no easy task. The young nobleman soon found that he would require to make a new class of teachers, and give special attention to the moral aspect of the art of teaching. Books on the subject were lacking, and Count Guicciardini was in quest of a suitable textbook when one day he met a well-known literary friend. He asked him whether he could recommend any good, moral book on the art of teaching. After some reflection his friend exclaimed, "Take the Gospel." The abrupt recommendation did not remain unheeded by the Count, who examined his valuable library, but could find no copy of the Bible in Italian. He had, however, the Latin Vulgate, and he began to read it as a fit source from which at least he might translate some helpful matter on the subject of his quest. With this object in view he read on day by day.

While Count Guicciardini was thus perusing the Vulgate Bible he began to discover several serious points of divergence between it and his Church, and his educational pursuits became lost in his more spiritual researches. It was in this frame of mind that one day he was about to go out for a walk. He was descending the magnificent staircase of his palace when he observed the caretaker at the bottom reading a book, which was hurriedly hidden on the approach of the nobleman. Filled with curiosity almost amounting to suspicion, the Count informed his servant that he had noticed his surprising action, and asked for an explanation. Begging his master to keep the matter secret, he confessed that the mysterious volume was the Italian Bible, and he handed it to the Count. "But do you understand it ?" "Yes, some of it," replied the dependant. "Well, take it, and come upstairs with me."

Count Guicciardini and his caretaker were soon shut in a room in the palace reading and meditating together upon God's Word, and this continued daily for some time.

While the truth of the Gospel was maturing in his mind, one day Count Guicciardini was saying his creed, and came to the profession of his belief in "the communion of saints." He suddenly stopped, and asked himself the question: "Who are these saints in whose communion I believe? They must be saints on earth." Before many days passed Count Guicciardini found his all in Christ, and his conversion and testimony showed this. He rejoiced to know that Christ was made unto him wisdom from God, and righteousness, and sanctification, and redemption ; and now he gloried no longer in his own righteousness, but in the Lord (1. Cor. 1. 21).

The Grand Duke was now completely under the power of the Jesuits, and he consented to a determined and definite effort proposed by his government for the suppression of any evangelical work or worship in Tuscany. In January, 1851, the services held in Italian in the Swiss Church were forbidden, and one hundred and twenty persons who had attended them received notice, under the penalty of imprisonment, to cease frequenting these or any other public or private evangelical meeting, while a special prohibition was forwarded to Count Guicciardini.

With all the nobility of his character the Count resented this tyrannical action of the Tuscan Government, and informed the authorities that if they insisted upon it he would feel obliged to go into voluntary exile. This sacrifice he proved ready to make. On the 3rd of May, 1851, what he thought was the eve of his departure, he wrote to his few Christian brethren a letter which ranks as one of the noblest documents in the history of the Italian testimony.*

On the evening of the 7th of May, Count Guicciardini went to the house of Fedele Betti, a Christian brother, to say good-bye. He was accompanied by a young Italian whom he had met on the way. Other four friends had arrived shortly before. The little gathering was therefore casual and informal, and in fact the host was the only one of the seven who had known all the others. The subject, however, soon turned upon the Count's approaching and regretted departure. Signor Betti proposed that before separating they should read the fifteenth chapter of John. Each verse afforded a subject for a brief and comforting comment, and while the simple little meeting was thus peacefully proceeding the bell rang, and seven gendarmes entered and arrested the seven disciples of Christ. At half-past eleven o'clock that night they were taken to the historical Bargello prison and all put in the same damp and dirty cell, in which, however, they were able to enjoy one comfort, the continuation of their happy meditation of John 15, for Count Guicciardini had a small New Testament in his pocket. The seven disciples were condemned to six months' imprisonment in different parts of Tuscany. Through diplomatic and personal influence, in a short time the sentence of imprisonment was so modified that Count Guicciardini and three of his fellow-prisoners were able to start for Genoa and Turin.

He finally reached Britain, where a warm welcome awaited him by the noblest Christians in the country. His temporary exile in England was a link in God's golden chain. Here he found young Signor Rossetti, and led him to Christ. Returning later to his native country, on which the day of liberty was dawning, he spent his time and means in the spread of the Gospel. He visited his dear Italian brethren in their meetings and homes, and never allowed his social position to form a barrier in Christian fellowship. From the palace which bears his name he peacefully passed to be with the Lord for whom he had suffered the loss of all things, and counted them but as naught that he might gain Christ.

"By faith" he made the choice of the faithful," choosing rather to suffer affliction with the people of God than to enjoy the pleasures of sin for a season; . . . for he had respect unto the recompense of reward" (Heb. 11. 25, 26).

*The full text of the letter addressed to his brethren by the Count, with the testimony of ten others, will be found in "Heroes of the Faith in
Modern Italy." 2/6 post free.