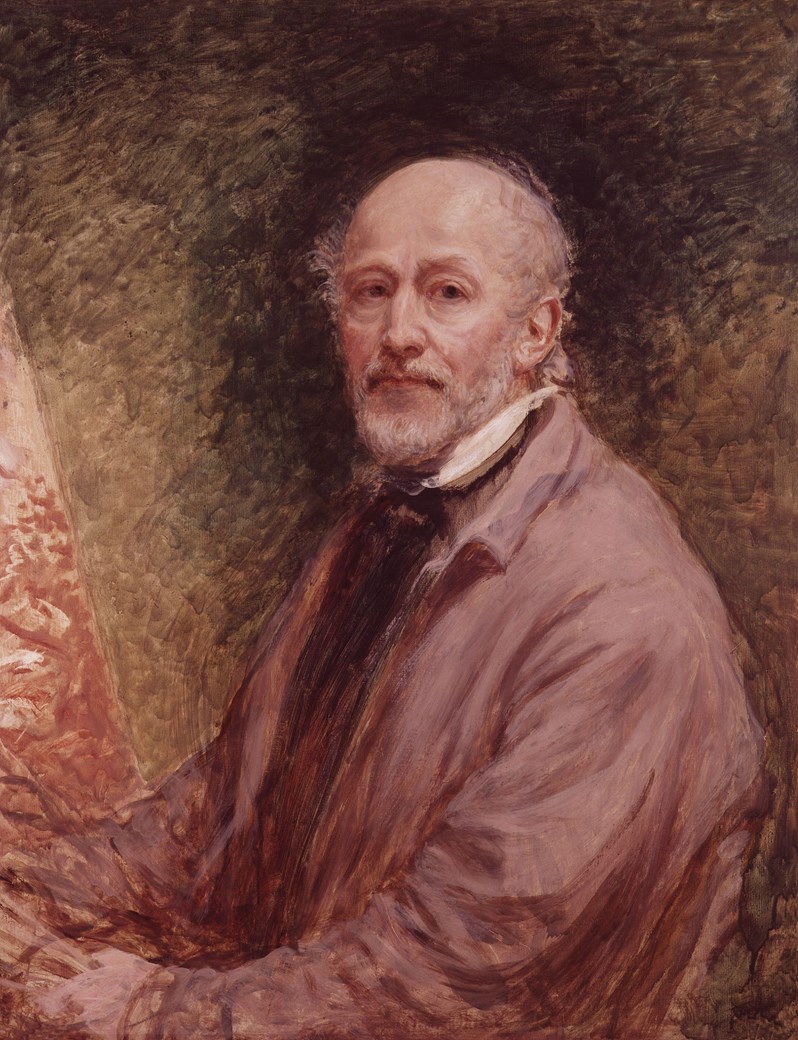 Not someone I'd heard of before, but apparently a well known painter, who for a short while was associated with the Brethren.

Short extract from his biography, (http://www.victorianweb.org/painting/linnell/story2/2.html), which can also be founda on Internet Archive.

He may have been stimulated to do this through the influence of a new order of minds with which he about this time came in contact. As already stated, he in 1843 became acquainted with the body known as the Plymouth Brethren, a sect which has distinguished itself by its careful study of the original texts of the Scriptures, and has produced several men of exceptional learning in this department of research. With these people he associated in religious communion, and occasionally attended their meetings in London for 'breaking bread,' etc.

He had strong sympathy with the Brethren in their principles and in their practices where he considered these in agreement with Scripture precept and example. He was in accord with them in that they had no paid preachers or ministers, and gave no titles; that they recognised the equality in standing and privilege of all believers, all the brethren having liberty of speaking, etc., in their assemblies and that they professed to receive one another in fellowship at 'the Lord's table' simply on the ground of having faith in Christ. He recognised that they had clear spiritual perceptions of many truths as revealed in the New Testament, having learned these by sincere, careful, and critical study of the texts, and by believing in the simple and literal meaning of the Scripture words. Thus they believed that they acquired light as to prophetical truth, especially the truth of the pre-millennial personal advent of Christ, etc.

It is essential to give these details, as showing Linnell's turn of thought in these matters. But after awhile he found that he could no longer yield the Brethren that sympathy which he had at first given. He thought that, through lack of the humility that is proper and becoming to Christians, and the unity that arises from real brotherly love, a sectarian and intolerant spirit had sprung up among them, certain of them presuming to judge and censure others, and to usurp authority over them, which caused separation and exclusions from communion one of another.

Thus in January, 1846, at their headquarters in Plymouth, the body became divided into two opposing parties. The division, and the consequent intolerant action, spread to the different gatherings in London, some of the leading men connected therewith assuming what Linnell considered priestly prerogatives. This was one of the things against which he had always warred, and so in 1848 he and his family discontinued assembling with the Brethren, losing sympathy with them, and being unable any longer to co-operate with them in what they considered their unscriptural action.

This intercourse with the Plymouth Brethren was more of the nature of an incident in Linnell's life than a matter which affected either his principles or his habits. He took no active part in their public meetings, and hardly ever spoke in them, preferring the position of listener and learner, and simple partaker in the Christian fellowship of the body. As regards all they wrote and said, he tested and judged them strictly and impartially by the text of Scripture, as he had always done with regard to the productions of everybody else. He was ever ready to receive help in the understanding of the inspired text from anyone, and thankfully availed himself of every such afforded help; but to the man himself who might be instrumental in giving such help he allowed no authority. As already said, his acquaintance with this body probably stimulated his Biblical studies at that time, but had no further effect. He was always grateful to the Brethren for the books they had produced, which afforded much assistance in the study of the Greek and Hebrew texts, such as 'The Englishman's Greek Concordance of the New Testament,' and 'The Englishman's Hebrew Concordance of the Old Testament.'