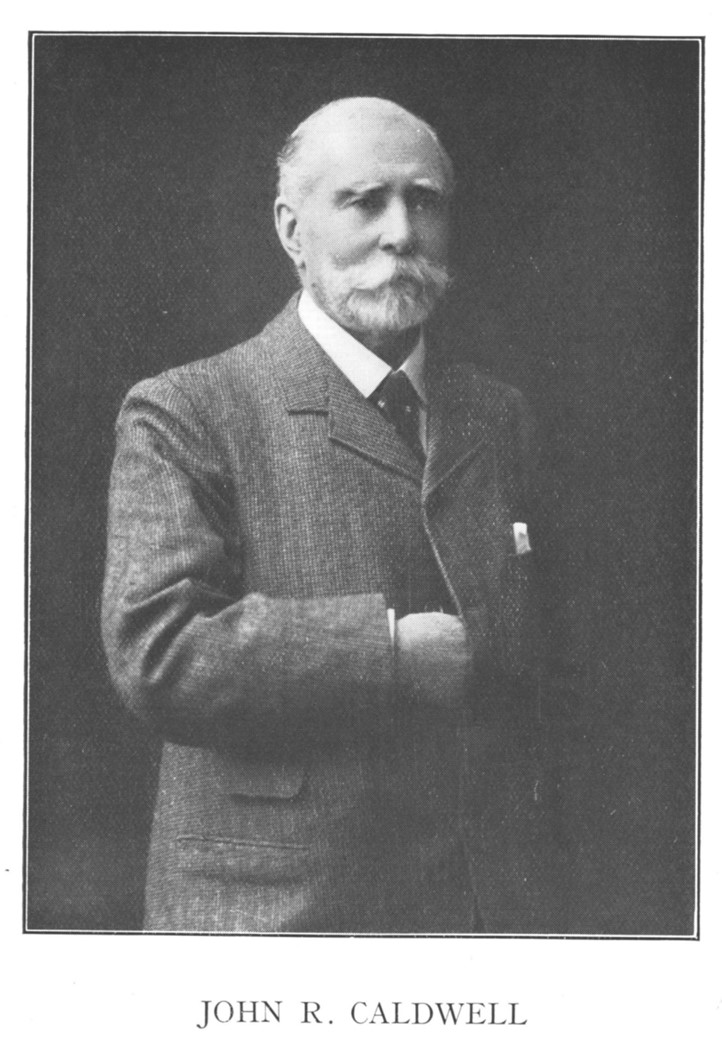 JOHN R. CALDWELL was born in Dublin, on 26th May, 1839, his parents came to reside in Glasgow when he was five years of age, where he was brought up in "the nurture and admonition of the Lord," his father being a leader in connection with the Independent Church. As might be expected from such surroundings his leanings were ever to the moral and even evangelical side of life. After being interviewed by two deacons, who inquired if he believed in the Bible and the Lord Jesus, he joined the Church, taught in the Sunday School, was a member of the Y. M. C. A., and passed for a Christian by all who knew him.

At this time, in the year 1860, GORDON FORLONG, a well-known gentleman evangelist, was invited by the godly elders of Ewing Place Church to have a series of meetings in the Church, with the result, to use Mr. Caldwell's own words, "I felt I had not experienced the great change, and at the close of one meeting I waited as an anxious one among many, and heard from John 5. 24 that 'He that heareth My Word, and believeth on Him that sent Me, hath everlasting life, and shall not come into condemnation, but is passed from death unto life.' This was indeed good news to me. I heard, I believed, and I had everlasting life. From this time the Bible became a new Book to me, my constant and loved companion. I read it with opened eyes, and beheld in it wondrous things."

The Revival in the North of Ireland in '59 created great excitement in Glasgow. Pulpits and platforms of many Churches were opened to laymen as preachers of the Gospel. The old legal ecclesiastical bands were being snapped in many places. The life of the born-again element in Ewing Place seems to have overflowed its bounds. The basement of the Church was utilised by them first for Sunday School work, with considerable success, then having rented the school-room from the managers, they launched out into an Evening Service on definite Gospel lines. This seemed too much for the minister, for however much he had yielded to former efforts, to have a service apart from Church control was too much for him; it must be stopped at once.

Perhaps it was one of the "all things," for just at this time Mr. Caldwell, Sen., who was feeling the bondage of sectarianism, and Mr. Caldwell, Jun., who in the days of first love was inquiring, "Lord, what wilt Thou have me to do?" got into contact with godly men taking a lead in a meeting emerging from Scotch Baptist lines to what would now be called Brethren lines, though then, as now, a better definition is the "ways that be in Christ" (1 Cor. 4. 17).

Bible readings had been held in the home of Mr. Caldwell. Various doctrines were discussed, and the Scriptures were examined on themes hitherto neglected, with the result that J. R. Caldwell and his friend and partner, Geo. Young, were immersed as believers in Christ.

A transition period of some months at this juncture would be difficult to describe, but it ended in a severance from membership in the Congregational denomination, and an adherence, which was to be lifelong, to meet in simplicity, according to the Scriptures. As he says, "He found there those with whom he had true fellowship, to whom the Word of the Lord was precious and the Name of Jesus sweet. "

A successful business life, a strenuous Church life, and a steady Christian life does not afford points of contrast or scenes of romance to make an enthralling story, yet it would take a volume to speak of the many-sided life of usefulness of such a "brother beloved. " A few phases must suffice.

MINISTRY OF THE WORD may be mentioned first, as his name will be remembered by thousands of the Lord's people in all parts of the earth who had the privilege of hearing Mr. Caldwell speak. In the morning meeting, at which he ministered only at intervals, the Word was sweet, short, Christ exalting, and worship producing. In the Sunday School, in the Gospel meeting, at the street corner, the message was quietly and reverently listened to. But his forte was ministering the Word to the saints in the continued exposition of a book—Leviticus, Corinthians, Thessalonians, and Hebrews being his favourites—or in a series of addresses on the Offerings, Old Testament Characters, God's Chosen People, Christian Duties, or similar themes; or, as was much more common, in a helpful message from the portion of Scripture or theme which had formed his private meditation during the preceding days.

His notes were merely small slips of paper with the headings and the abundant references to which he asked his hearers to turn in the course of every address. He kept scant record, if any, of where and when he had given certain addresses, and felt quite free in repeating a message if suited to the hearers. "The Red Heifer" and "Kinsman-Redeemer" were favourite subjects on which he spoke many times. "God our Father," "The Love of God," "The Church," and "The Lord's Coming," will be remembered by many as others which flowed in freshness from heart to heart.

His WRITINGS took up a great part of his time when not occupied with the extensive business of Caldwell, Young & Co., Silk Merchants, of which he was the head. One of his warmest books is "Things to Come, " written in early Christian life, concise and up-to-date even to-day, put third on the list of "Best Books on the Signs of the Times," by Dr. Torrey, of Los Angeles, Cal. His other books, "God's Chosen People," "Shadows of Christ," "Christ in the Levitical Offerings," "Earthly Relationships, " "Because Ye Belong to Christ," and other subjects, have edified many. His volumes of Exposition of the Epistles to the Corinthians, first given as Addresses to audiences of 600, on Sunday afternoons, latterly issued under the title of "The Charter of the Church," will long remain standard volumes of exegesis on the Church Epistles. Many smaller books and pamphlets, Gospel tracts, and almost innumerable magazine articles, always manifesting care in preparation, moderation in statement, and aiming at the definite spiritual profit of the readers, flowed from his busy pen during the long period of close on sixty years of Christian life.

As COUNSELLOR his advice was sought by brethren of high and low degree in all parts of the world. It was ever freely given, either with quiet deliberate voice or concise yet clear pen. The extent and value of this service will only be rightly assessed at the Day of Recompense.

His LIBERALITY, which none would have dared to speak about in his lifetime, cannot even now be told, because he strictly followed the Scriptural injunction: "Let not thy left hand know what thy right hand doeth" (Matt. 6. 3). An earnest advocate of "systematic giving, " which in his position meant a liberality considerably above what most would judge.

SOUND DOCTRINE ever found in Mr. Caldwell a loyal adherent and faithful advocate. From "Higher Criticism," the New Theology, and much of the modern familiarity with Bible truths and doctrines his spiritual instinct revolted. More than once in the pages of The Witness, which he so ably edited from 1876 to 1914, he reiterated his adherence to the fundamentals of the faith. The statement at the close of 1910 is typical. It reads: "Whilst not claiming infallibility, we rejoice to believe that a steadfast testimony throughout has been maintained concerning the fundamentals of the faith, including the plenary and verbal inspiration of the Scriptures, the perfect humanity, essential Deity, glorious work and worth of the Lord Jesus Christ, the utter ruin of man, necessity and sufficiency of the atonement, present possession of eternal life by the believer, the priesthood of all saints, the oneness of the Body of Christ, the immersion of believers as being the Christian baptism of the New Testament, the weekly 'breaking of bread'^ as the privilege of all the children of God, separation from the world and its associations, gathering together in the Name of the Lord apart from sectarian titles and clerical assumption, the personal and pre-millennial Coming of the Lord as the 'blessed hope' for which we wait, the eternal conscious punishment of the impenitent, and the eternal blessing and glory of the saved."

Continuing, he added: "It may be well to make clear our position regarding the somewhat vexed question of 'the fellowship of saints.' Apart from a period of some years, from 1876, during which the Editor was induced to advocate narrow views concerning assembly fellowship, The Witness has continued to advocate the reception of all those who are (1) truly 'born again,' (2) sound fundamental doctrine, and (3) godly in walk. Such was the practice of 'beloved brethren' of early days, and such the ministry by tongue and pen of many of our honoured contributors now with the Lord." To such teachings he held tenaciously to the end.

The first real signs of closing years were manifest in 1905. Before leaving for France, fifty-two brethren, thinking they might not have another occasion, desired to confirm their love and return thanks for the help received, met Mr. Caldwell in a room of the Christian Institute on Monday, 20th November, 1905. His health steadily failed, and latterly he was as a child resting in the bosom of his Father God, till without a murmur during all the weary months of pain and weakness he quietly fell on sleep on Lord's day morning, 14th January, 1917, to awake in
His likeness on the morning of the Resurrection.