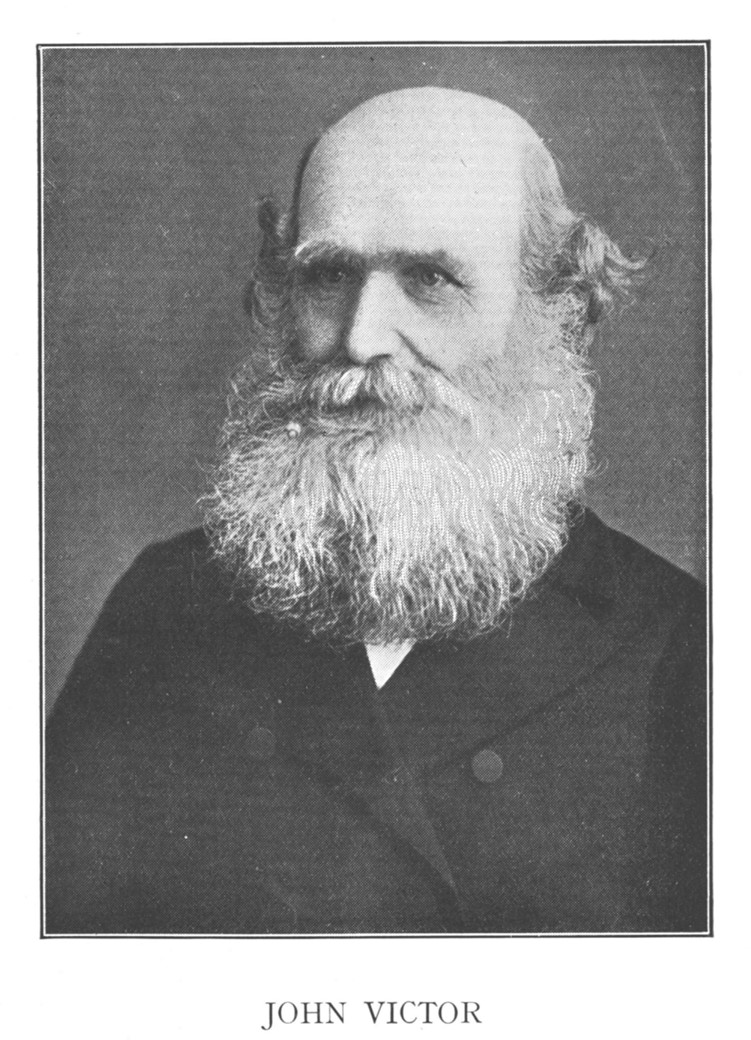 JOHN VICTOR, pastor, teacher, preacher, was born at Marazion, in Cornwall in 1820. He was brought up among the Methodists, and being converted at the early age of seventeen, and showing an aptitude for preaching, he was placed on the plan as a "local preacher." It is stated as a proof of his earnestness that he studied and learned the French language in order to preach to the French sailors visiting the little Cornish port.

In the course of a few years he went to Bristol, where he soon came into contact with the two devoted servants of God—George Muller and Henry Craik—and connected himself with the company of believers meeting at "Bethesda" in that city. He frequently preached in the open air, especially in the slums, and began a work which subsequently grew to large proportions. Removing to Clevedon in 1852, his exceptional gifts as pastor, teacher, and preacher led to his assuming the oversight of the small company of believers meeting in that town, which had been under the care of Hon. Mr. Methuen, formerly Rector of Corsham, Wilts.

One writes: "The blessing of God rested manifestly on the labours of His servant, so that the premises used for the meetings became inadequate and a chapel was erected. . . . As time advanced, and the blessing of the Lord continued to rest on Mr. Victor's labours, his ministry ripened and attracted such numbers that two more enlargements of the building took place. . . . The appreciation of Mr. Victor's ministry was by no means confined to his regular church and congregation. Clevedon grew in public favour as a holiday resort, and many of the visitors delighted to listen to the eloquent pastor. Indeed his ministry powerfully influenced the choice of many, and took them year by year to the same spot that they might gain in spiritual blessing as well as in bodily health. The extent of his usefulness in this way it is impossible to trace. . . . Preaching stations were established in several surrounding villages, and for the supply of these Mr. Victor made himself responsible. He frequently visited the various stations, and it was a great delight to him to get among the village folk, many of whom were brought to the saving knowledge of the Lord through his labours.

In a remarkable way Mr. Victor combined the gifts of pastor, teacher, and evangelist. As pastor, he was full of sympathy and continually alive to the needs of the people. He lived among them and was ever ready with sympathy and help. He was emphatically a teacher, and his ministry was eminently calculated to edify believers. At the same time the elementary truths of the Gospel ever had a prominent place in his preaching, and made his discourses second to none for evangelistic tone and quality. He had learned the true secret of a staying power in his ministry—the inexhaustible nature of the Word of God. He was a diligent student of the Bible, and was enabled continually to 'bring out of his treasury things new and old.' "

JOHN WOOD, Secretary of the Evangelization Society, once said: "There are not ten men in England who know their Bible better than John Victor."

Mr. Victor was laid aside from active work for about three years before his departure, during which period he had to endure intense suffering. The end came peacefully on March 22, 1894, at the age of 74.