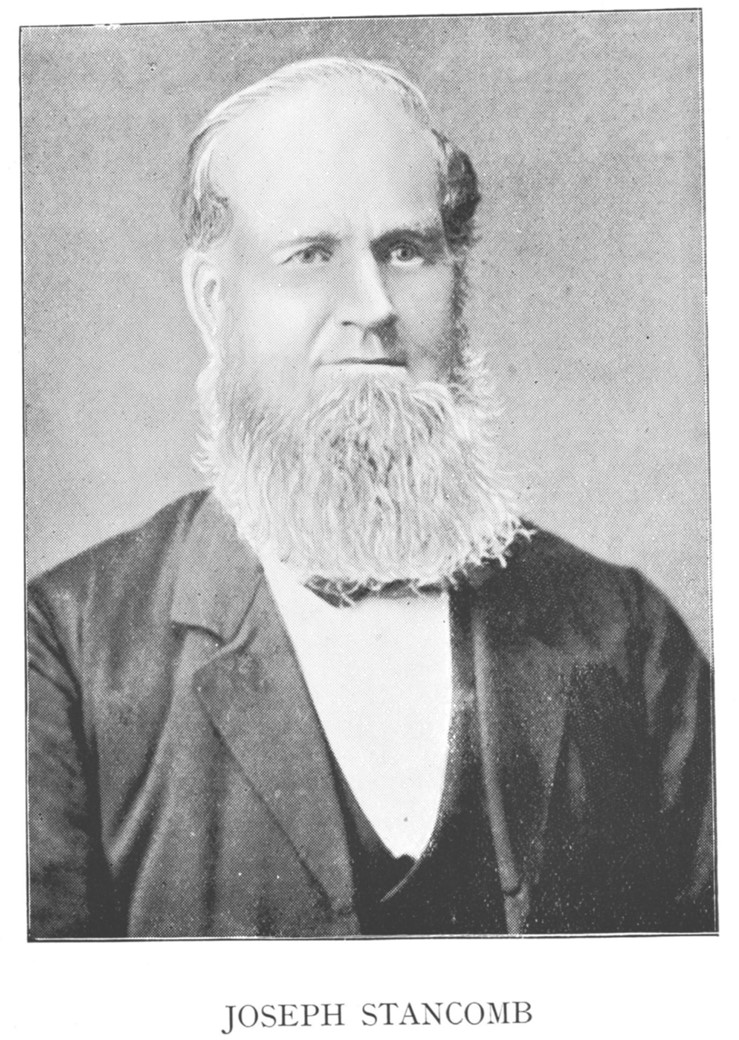 JOSEPH STANCOMB was brought to the Lord in early days, and taking a decided stand as a Christian, the gift bestowed upon him was richly developed for the help and profit of those amongst whom he had the opportunity of ministering the Word of God. In the solemn division of 1848, Mr. Stancomb, under the firm impression that some were not as prompt as they should have been in inquiring into certain doctrines alleged to be dishonouring to Christ, took his stand with the late Mr. J. N. Darby and others, and maintained that position for about twenty years.

Having been left a widower with six children, he married, in 1854, Miss Martha Murly of East Coker, near Yeovil, who, after her conversion, had been much used of God for the beginning of a gracious work in that village. There he went to reside, and became the chief helper in the work that had been going on for nearly twenty years, the meeting having already been favoured with the visits of various servants of the Lord, for whose reception the house of the late Mr. Murly was always open. He was much used of God to the blessing of many in the neighbourhood, and also moved about a good deal in a wider sphere, his ministry being much appreciated.

Mr. Stancomb was a man of singular integrity of conscience before God, and it was this that caused him to be unable to go on in the position he had taken. A little over thirty years ago he was arrested, in common with some other men of discernment, by certain teachings of Mr. J. N. Darby, which they judged to be contrary to truth, and desired should be brought to the test of Scripture. Others refused even to allow a question concerning these teachings, and Mr. Stancomb very naturally asked Himself: How can I stand in separation from those who are charged with sheltering unsound doctrine, through non-investigation, and yet go on with those who are allowing a similar doctrine, and refusing to consider it when it is brought before them?

Careful inquiry convinced him that those from whom he had separated had really judged and cleared themselves of complicity with the evil doctrine in question, and that their aim was to be subject to the Word of God and the authority of Christ in all things. He therefore felt that there was no godly reason for remaining in separation from them, though he did feel very deeply that there was ground for much deep humiliation before God on both sides, and in this some who had occupied a different position were of one mind with him. Meetings were held, therefore, for united confession and prayer, by means of which barriers were still further broken down, and God gave much blessing.

Through the visits of dear brethren to the small conferences held at Yeovil, old links of fellowship were revived and new ones formed, and a time of deep humbling before God in one of them is remembered by some to this day. Just about this time our departed brother, Mr. W. Yapp, visited Mr. Stancomb, and sought his fellowship in the conferences proposed to be held at Leominster, the object of these conferences being that servants of Christ might be helped by spending a few days together in prayer and meditation on the Scriptures. In these he became a willing helper, with the understanding that the first day should be specially given to humiliation and prolonged waiting upon God in prayer. He was pre-eminently a man of meditation and prayer, and hence his prayers in public were so rich with the very language of Scripture, and so calculated to draw hearts out towards God. In larger meetings, such as those long held at Merrion Hall and Willow Park, Dublin, his ministry was much appreciated, though it was in the smaller conferences that he shone most brightly.

Through an unfortunate accident the house in which Mr. and Mrs. Stancomb and family resided at East Coker was burnt down, which led to their removing into Yeovil, where they resided until he fell asleep on the 8th of March, 1893, aged 75 years. To the end, however, he regarded East Coker as his special place of meeting and local sphere of service—a service in which he ever had the hearty co-operation of his wife and daughters, the latter being accustomed to spend the whole of the Lord's Day there, taking charge of the Sunday School and helping in other ways, as they find pleasure in doing at the present time. Whilst health admitted, he regularly, at certain intervals, ministered the Word in Yeovil with much acceptance, and monthly visits to other places were much valued, as was also his fellowship in many annual meetings and the quarterly meetings at Exeter.

While the great theme of Mr. Stancomb's ministry was the heavenly calling and hope of the Church of God, he had a very firm grasp of the truth of God's electing love and what are generally known as the doctrines of grace, combined with much simplicity in preaching the Gospel. Any true evangelist always found in him a ready helper, and so free was he from anything like jealousy or self-esteem that he ever made much of the ministry of others, and was even too ready to keep in the background, while giving place to men of much less ability than himself.

With all movements that grew out of a desire for more practical holiness, he had deep sympathy, though his knowledge of Scripture made him very conscious of the defects of some teachings connected with them. He increasingly feared that there was a lack of such teaching among ourselves as is calculated to lead to devotedness of heart to Christ, and that a tendency to glory in riches not actually possessed by living faith was leading to a poverty of experience as to Christ dwelling in the heart. He saw the danger of the form without the power; the shell without the kernel; a glorying in position with little regard as to condition. Those who knew Mr. Stancomb best knew how he himself thirsted for deeper experience of this reality, and how truly his one aim was to walk before God, and to be wellpleasing to Him. His public service flowed out of this; hence its value. In personal matters he was always ready to sympathise and help, and he never heard of any sorrow or cause of reproach amongst Christians without feeling it deeply. Anything that brought dishonour upon the Name of Christ was a heavy burden to him. His spirit was very free from anything like sectarian narrowness, and he ever sought to embrace in his love and prayers the whole Church of God. The divisions amongst the people of God were constantly mentioned in his prayers, and certain tendencies amongst some who seemed to be departing from the simplicity of Christ he felt very deeply. There can be little question that his own experience of former days made him dread a line of things which inexperienced brethren are ready to turn to. He felt that the sittings which God in His gracious discipline has given some, should have sufficed to keep others from following such pernicious ways, in which Christ cannot be known as both centre and circumference.

Whilst it is a joy to look back upon years of close fellowship given by God in His grace, it is still greater joy to look forward to the day for which all who are "with Christ" are waiting—the day of resurrection glory—the time of perfect fellowship, when the sorrows connected with human and Divine affections, as well as service, will be all past, and without any conflict or hindrance "His servants shall serve Him, and they shall see His face, and His Name shall be in their foreheads."

There is an article by him in The Coming of the Lord: Sixteen Addresses on "The Blessed Hope," Delivered at Freemasons' Hall. Also one paragraph on p517 of Footseps of Truth 1883, and a couple of other references that can be seen using the Search page.

The British Library also offers direct delivery of digital copies, though this is a bit pricey. I ordered a rare 48-page Brethren pamphlet from 1852 two years ago, for which I had to pay £ 35.32.

Friday, Oct 14, 2022 : 01:26
Syd said ...
I presume that it was concerning the writings of Darby on the "Sufferings of Christ" that Stancomb had an issue with. Some asserted that Darby's view was not dissimilar to that of BW Newton. This however, is not too difficult to judge.

As with Stancomb's side, there were men of "singular integrity of conscience before God" and "men of discernment" that agreed with Darby's view. Some men, perhaps Stancomb included, didn't write down their opposing views, so one will never know how scripturally correct their objection was.
Friday, Oct 14, 2022 : 14:30
Steve Noble said ...
Regardless of whether their objections to JND's teachings on the "sufferings of Christ" were warranted, it is a simple fact that (so far as I am aware) that all who opposed Darby at this time went to the 'Open' meeting. I fail to see why withdrawing on account of 'bad' doctrine necessitated a change in ecclesiastical principles.
Friday, Oct 14, 2022 : 20:22
Syd said ...
True, but this is the nature of fallible men, regardless of being sanctified in Christ. With the 1848 division, many moved away from JND even though doctrinally they still agreed. However, as with Paul who towards the end could say, “all in Asia have turned away from me,” it was probably more being associated with JND that turned some away. Then gradually the doctrinal fault-finding emerged.

And why any change in ecclesiastical principles? Well Peter all but went back to Judaistic principles when he “dissembled” with other Jews and turned away from the Gentiles (Gal 2). How true and relevant Scripture is to instruct us on these matters.