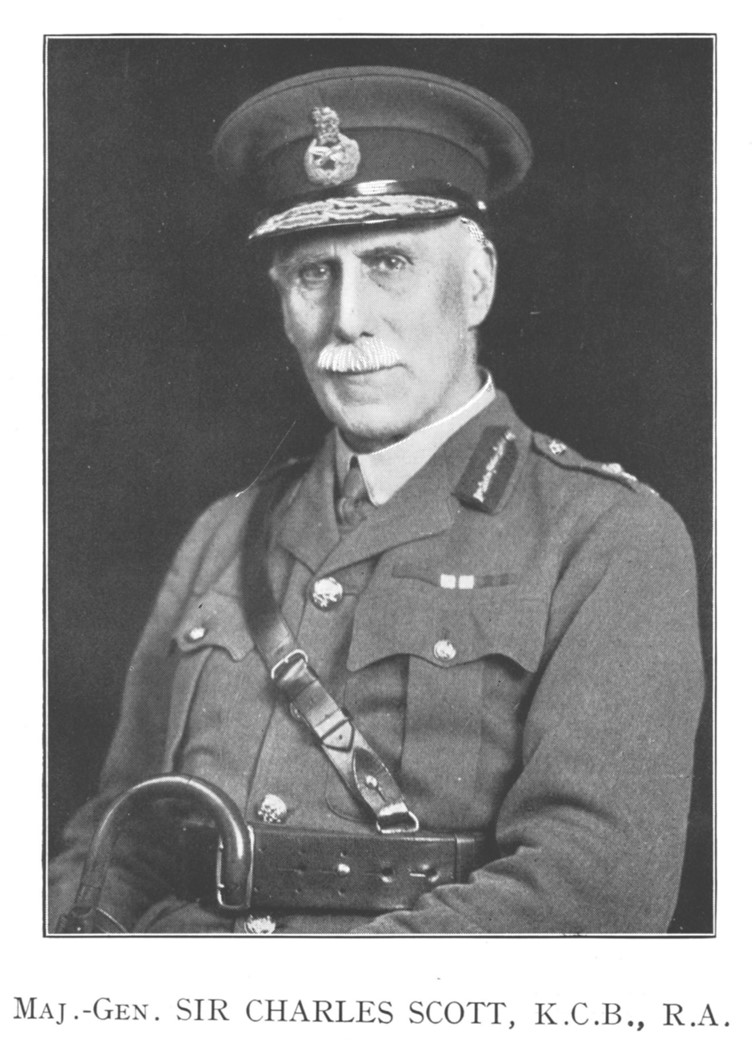 MAJOR-GENERAL SIR CHARLES H. SCOTT was born at Portsmouth in 1848, entered the Royal Artillery in 1868 when but nineteen years of age, and was posted to a battery in India. He served in several of the campaigns on the north-west frontier of India, including the Tirah Expedition of 1897-8, and filled many posts in connection with the Ordinance Service in India, including that of Director-General. In 1905 he was appointed Military Supply Member of the Viceroy's Council, which office he held for four years, when the position was abolished by Lord Morley, and Lord Kitchener became the sole representative of the military authorities in the Government.

During his early years the young soldier had not felt any spiritual need. His training at Woolwich Royal Artillery Academy passed without his being conscious of definite leading; indeed, up to the time he went to India, according to his own account, he had thought little of what so soon was to be the motive power of his life. Not long after his arrival in India he awoke to his need of a Saviour, became an earnest seeker and student of the Bible to find the truth, and did not seek in vain.

Soon after his conversion he came under the influence of Mr. HENRY DYER, and became associated with those known as "brethren." He took a very decided stand for Christ, not shrinking from His reproach, and all the spare time from his official duties was given to work for his Master. A good part of his thirty years' service in India was spent at Ishapore, near Calcutta; and missionaries, work among soldiers, seamen, ships' apprentices, the Y.M.C.A., and other agencies had his untiring help.

Sir Charles retired in 1910, when the honour of Knight Commander of the Bath was conferred upon him. His wife, who was long associated with him in Christian work, predeceased him. She was the daughter of the late General J. G. Halliday, who was also a devoted servant of the Lord, for many years in the Assembly at Lewisham, a south-eastern suburb of London. The Shrubbery Road Mission, Lewisham, the Gray's Yard Mission, the Victoria Homes for Working Men, Miss Perks' Soldiers' Homes, the Soldiers' Christian Association are amongst the many activities with which Sir Charles Scott was closely associated in later years.

One of the last public appearances of Sir Charles Scott was to preside at a meeting of the Soldiers' Christian Association, also at the Kingsway Hall meetings more recently still. He was a devoutly spiritual speaker. Indeed, he never grudged time nor trouble to further any cause, or to cheer and help any of the very many who continually came to him for advice or assistance.

He became ill with influenza on 30th August, 1919, and after five weeks of illness, borne with most wonderful patience and sweetness, he passed, in his seventy-second year, to the rest that remaineth. The Hope of Christ's Coming was very real to him, and he spoke of it with longing up to the last. Miss Havergal' s hymn, "Thou art Coming, O my Saviour," was sung at the funeral, which took place at Wadhurst, 10th October.

The influence of his wonderful Christ-like spirit was felt everywhere. One who served under him writes: "I do not know another such perfect specimen of a noble-hearted gentleman in every sense of the word. He spent his life in doing good and helping others, and none who knew him ever spoke of him but in terms of the deepest affection and love."

There is a reference to a London City Mission place "Shrubbery Hall" - Vian St, SE13 7DJ - see https://www.britaine.co.uk/london-city-mission-F1B0EC60E1CD8. This can be seen on Google Maps;

Though clearly looks delapidated and also nothing online suggests anymore used by the L.C.M. There has been a lot of work in that area of Lewisham over the last few years so the building may have gone now. Was it the original building mentioned above? I don't know.

I hesitate to venture into the geography of Lewisham, which is undoubtedly Tom's territory, but C H Scott was married to General Halliday's daughter. Chief Men says that Halliday retired to live in Church Terrace, Lee, Kent, which is now part of Lewisham. This is barely five miles North East of Shrubbery Road off Streatham High Rd, Tooting Bec where there was a small mission room.  I suspect that HyP's knowledge of South East London was a bit shaky and his contributor's definition of Lewisham was a bit elastic!  I have touched on the military/Brethren connection with South-East London in 'Plymouth Brethren and the Armed Services' (Elusive Quest 232-238) where, regrettably I repeat W.H.S's reference to the 'Shrubbery Road Mission, Lewisham'.  Incidentally in Chief Men's account of  Halliday's family connection with Russia, Hyp refers to the court of St Petersburg but a few lines later, anachronistically uses the communist nomenclature Petrograd...  almost as confusing as his mix-up over Lewisham!       Timothy Stunt

I would ever hestitate to disagree with our resident expert, Mr Stunt, but I think on this occasion you might be mistaken :)

Firstly even today, Stretham although only five miles as the crow flies feels a "million miles" away from Lewisham - transport in London goes very well in and out towards the centre, but orbitally around the South it is slow and difficult. Back then they were two different counties, Kent, and Surrey, and making that journey day after day would have been tedius in the extreme.

Most convincingly, this entry from "The Religious Census of London", 1888, (I've cropped the bits in the middle), shows there was such a room in Lewisham,

Maybe I will need to consult an old map, but I think the LCM hall called "Shrubbery Hall" must have some connection with the location of the previous Mission Hall.

Saturday, Dec 15, 2018 : 00:30
Timothy said ...
Indeed! I should have known better and your latest clipping is pretty conclusive! In my defence I should explain that the Shrubbery Road Mission was but the first on a list of activities with which we are told Scott was associated... The list includes "the Gray's Yard Mission" (near Manchester Square in West London); "Victoria Homes for Working Men" (in Whitechapel, EC); and "Miss Perks' Soldiers' homes" in Winchester — quite a far flung range of organizations. Sadly my map of London in the 1860s only extends as far south as Camberwell and the edge of New Cross and doesn't reach the Kentish village of Lewisham!
Merry Christmas! Timothy
Saturday, Dec 15, 2018 : 02:11