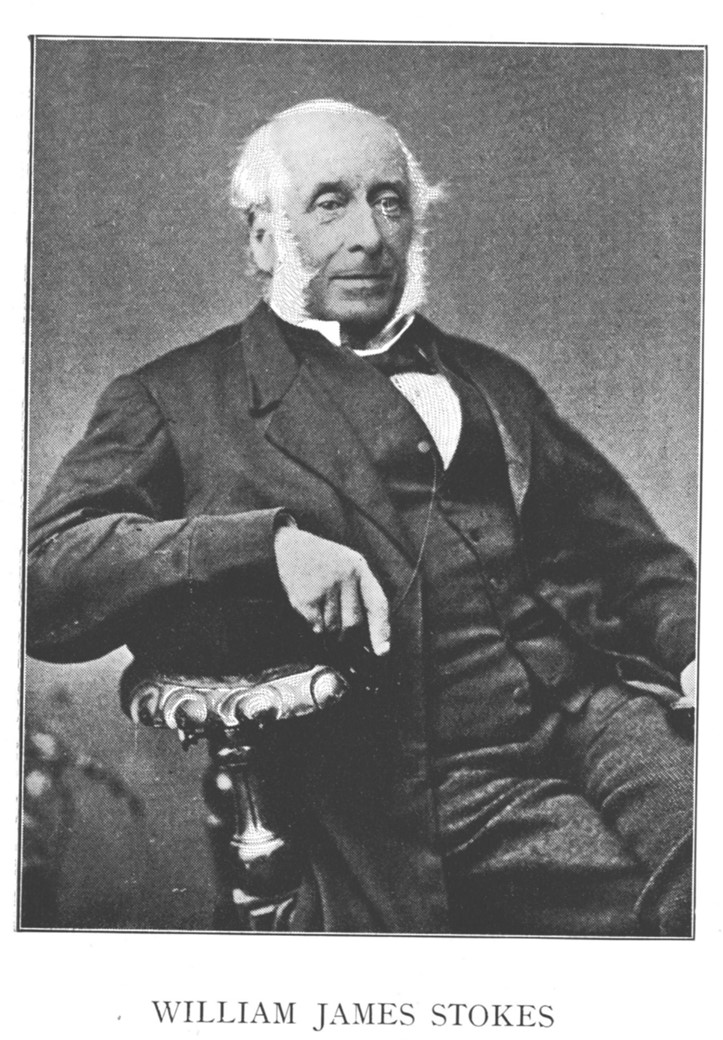 WILLIAM JAMES STOKES was one of the first seven to meet as brethren at Aungier Street, Dublin, in company with J. G. BELLETT, FRANCIS HUTCHINSON, JOHN PARNELL (afterwards LORD CONGLETON), J. N. DARBY, A. N. GROVES, and E. CRONIN, he being the youngest of the party—about twenty years of age. He was born in 1807.

AUNGIER STREET was the first public room, hired by Lord Congleton for their use on Lord's Day. His idea was that the Lord's Table should be a public witness of their position. There they commenced breaking bread. It was a large auction room, and in order to clear the place for the meeting on Lord's Day morning three or four of the brothers were in the habit of moving the furniture aside on Saturday evening.

One of these active brothers, referring to their Saturday night's work, after a lapse of nearly fifty years, said: "These were blessed seasons to my soul—J. Parnell, W. Stokes, and others moving the furniture and laying the simple table with the bread and wine—and never to be forgotten; for surely we had the Master's presence, smile, and sanction in a movement such as this was."

Mrs. E . TROTTER, in her most interesting book, "Undertones of the Nineteenth Century," says: "The inspiration came to them at first alone, and not under the influence of large multitudes ; neither did it die out, but energised and sustained them in lives of unusual toil and unusual length."

This may be truly said of W. J. STOKES. Greatly loving all Christians, and beloved by many, he was very helpful in large Bible readings, in private houses, and elsewhere, attended by godly clergymen and Christians of all denominations . He held a large Bible Class for men in connection with the Y.M.C.A. at Sackville Street, Dublin, the attendance numbering between 100 and 200. He was much used in ministry amongst Assemblies. By his gentle, tactful, and Christlike sympathy he was enabled to heal many breaches and minor difficulties in them. Some of his addresses at the Dublin believers' meetings have been published; also in a book, "Truth in Season," being notes of addresses by R. C. Chapman, H. Dyer, and himself. He frequently visited England, and in the late "sixties" addressed Christian young women in Devon with J. L. Harris, Capt. T. H. Hall, H. W. Soltau, and others.

Mr. Stokes' courageous initiative with Mr. Robert Keane (solicitor), of Dublin, resulted in the formation of what is now known as the Harold's Cross Protestant Orphanage, Dublin, and also a Rescue Home at 31 Marlborough Street, Dublin, still in existence. He was in ill health for many years before the end, but always cheerful, happy, and praising God for all His mercies. Had he lived until the 11th March, 1881, he would have been seventy-four, but he fell asleep on the 3rd. Surely "the memory of the just is blessed."

Below was shared with me

Years ago the was a Plymouth Brethren Hall called Grosvenor Hall in Rathgar, Dublin, Republic of Ireland. Later it was a Baptist place of worship.

Robert Edward Stokes, a brother of my late grandfather Maurice Hammersley Stokes, lived at 83 Kenilworth Square, Dublin where I used to visit him and his wife  Pearl (nee Roberts). After Robert’s death in 1958 aged 88  this Stokes family home which was built by Frederick Stokes in 1852, a prominent wealthy businessman and local or municipal politician in Rathmines./Rathgar. I refer you to The Irish Times Business Section/Real Estate  item which described 83 kenilworth Square built arond the 1850's by Frederick Stokes.

Robert Stokes, Maurice Stokes, Frank Stokes, Arthur Stonks and Fanny (Frances) Stokes, and their other siblings were born on and raised in Number 83. Their father was Richard Stokes, a prominent Dublin businessman, Richard Stokes and Son, Land Agents, 60 Dawson Street, Dublin (see Thom's Directory for Dublin) who also owned a summer home in Kingstown, now DunLaoghaire, in County Dublin. After it was sold some time around  the first half of the 1900s it became the Ardeen Hotel. Fanny Stokes who never got married lived out her years in DunLaoghaire and died in about the mid 1950s. I remember she was an artist and and a Member of the Royal Hibernian Academy. Prior to WW1 she travelled extensively in Europe.

After Robert and Pearl were married at Merrion Hall in 1917  their wedding breakfast was held in this building which was situated overlooking and Kingstown and now DunLaoghaire harbour and Dublin Bay. I recall  this  building being at the gable end of an upscale terrace of period dwellings a few stories high. The bride groom and guests after the wedding in Merrion Hall proceeded in an elaborate selection of horse drawn carriages to the Stokes summer home in DunLaoghaire. This information was conveyed to me by my late father Sydney Stokes prior to his death in 1989 in Rich Hill House, Barony of Clanwilliam, Lisnagry, County Limerick, Ireland .He was four yeas of age ( born in 1913) when he attended this wedding. He and the other few child guests were seated in a different room during the wedding reception.

The baptism and other records referred to by others in your website  may have been transferred to the Baptist Church which took over Grosvenor Hall at a time of decling numbers of Plymouth Brethren Members in Ireland? Maybe the records from Merrion Hall now a Dublin Hotel, were also transferred to a Baptist Church in the Dublin area?

Many years  ago there was talk among some of the  Brethren in Dublin about joining up with the Baptists.

This information was conveyed in 1959  to me by a late Plymouth Brethern member still resident in Rathgar area of Dublin  who knew Robert Edward Stokes  due to changing demographics.

Robert Edward Stokes was very active in the Plymouth Brethern Christian Fellowship. Until he retired in 1943 he had a very senior management position (Registrar) in Arthur Guinness and Company, St. James Gate Brewery, Dublin and then the largest brewery in the world. I understand he did not drink alcohol. He was a very strict man. I remember visiting my grand uncle Robert and his wife Pearl. Pearl's real name was Elizabeth. Pearl  had a wonderful sense of humour. I was nine when Robert Edward Stokes died or was "Called Home". The Guinness Archives or former personnel  office at St. James Gate Brewery  Dublin have information which can be seen about Robert Edward Stokes career in Arthur Guinness and Company.

Robert and Pearl Stokes are buried near the graves of other Stokes family members in historic Mount Jerome Cemetery, near Harold’s Cross in Dublin, Ireland. Robert’s brother, my paternal grandfather Maurice Hammersley Stokes ,P.C., (Peace Commissioner, Appointed by Kevin O'Higgins, Minister of Home Aaffairs, Saorstat Eireann (Irish FreeState),4th Octoner, 1923, was a member and Chairman of the Dublin Cemetery Ltd, ( Mount Jerome Cemetery )  Board of Directors until his death in 1959. The office at Mount Jerome Cemetery has records of  deaths and graves of Stokes family members which are situated near the  later built crematorium.

Maurice Hammersley Stokes, my grandfather ,was the youngest offspring of Richard Stokes and Fanny (Francis) (née Buchanan) . Maurice died in February 12th or so in 1959 in Sir Patrick Dunn's Hospital, Dublin, and is buried in Dean's Grange Cemetery. His only offspring, my father, Sydney Maurice Stokes, died in Rich Hill House, Lisnagry, County Limerick, on January 2nd., 1989 and is buried in a different section of Dean's Grange Cemetery.

The Ireland Census  completed around  1911 or 191 time period show that at 83 Kenilworth Square Stokes residents we individually listed under Religion as Protestant / Plymouth Brethern.

Where can I learn more about this  Stokes family and also their insolvent in the Plymouth which was  founded in Dublin in the early 1800s ? Among the early founders were my great, great, grand father William James Stokes, Lady Enniskerry, Reverend Darby, and others. Some of the Stokes families emigrated to the USA where they continued to be Brethern members. One was my granduncle Arthur T. Stokes who  was killed in battle in France on August 30th while servin with the American Army A.E.F. during World War 1.

My paternal great grand father Richard enterd in February 21st, 1922 according to a photograph I took of the grave years ago. His wife Fanny oredeceased him in October 1920. The headstones on the graves o Stokes family members were in need of being restored so as  to make details of the decesed resting there clear.

I recall years ago  during one of my  visits when searching around Dublin I ascertained that William James Stokes family were parishioners of a large Church of Ireland   church building  with impressive pillars on the front side and situated on the north side of Dublin north of  Parnell Square/ North Frderick Street areas south of the raod that leads to Dromcondra area and Collisntown/Dublin Airport. However, I do lack details and do recall visiting inside the church referred to.