Chief Men Among The Brethren 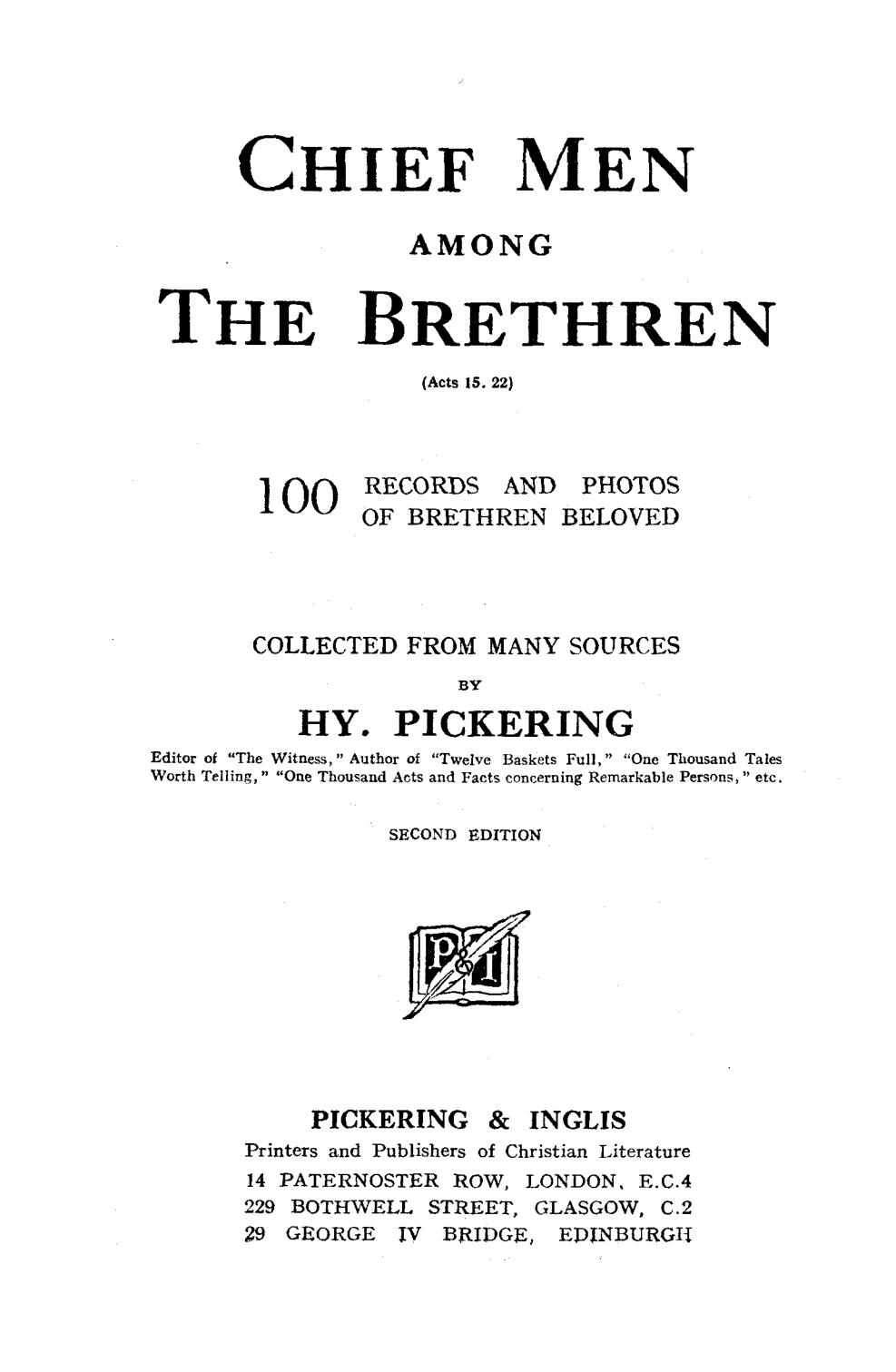 Tom said ...
In this well known book, many of the pieces are unsigned; several are over initials that we recognise like W.S[oltau] and J.S.A[nderson]; F.S.A[rnot] and E.E.W[hitfield] but there are several mysterious ones that remain unknowns:

Anyone any ideas?!
Saturday, Feb 10, 2018 : 03:21
Samuel said ...
This is a good development, getting HyP's Chief Men onto the site. If you have a copy of the first edition, maybe you could have someone scan those biographies in it which were omitted from this second edition, and upload them separately. (along with the preface, if different). My copy being inaccessible currently, I cannot do it for you, unfortunately.
Saturday, Feb 10, 2018 : 08:17
Tom said ...

Just noticed pages 170 and 171 are missing from this scan sadly.

A friend has pointed out to me that Henry Pickering who edited Chief Men also wrote a foreword to Alexander Marshall's biography in which he drew attention to the initials shared by several respected authors : Andrew Miller, Andrew Murray, Albert Midlane but he added Alexander Marshall 'whose initials are perhaps the best known of the four, on account of his long years of labour in many lands and the millions of times the initials were used in books, tracts, and magazines in many languages.'  I'm therefore inclined to adopt Marty's suggestion.

Another friend has suggested that C.E.F. are the initials of Charles Edward Faithfull (1848-1924) an Open Brethren missionary in Spain and France.  It's the most plausible suggestion to date, for C E F....  Timothy Stunt

FIGGIS (Henry William) The church and the great tribulation: observations on a pamphlet by H.W.H. bearing this title. (Glasgow, Pickering & Inglis,) [n.d.] 29+[3]p.

Marty, do you not think they are the same people and CBA have just got the name wrong?

One of Figgis' sons, Robert, was in some way related (by marriage) to Luke Howard; see http://www.wargravehistory.org.uk/howard/ch1.htm#i1206

The Irish connection would explain how he knew Ryan.

From the grave picture, I believe it is in the same area as JG Bellett and other brethren are buried.

Also does anyone know what the differences between the 1st and 2nd editions of this were? I think a handful were added and subtracted? I don't have the first edition.

Saturday, Dec 15, 2018 : 06:17
Timothy Stunt said ...
4 articles in the first edition were omitted in the 2nd edition:
George Frederick Bergin by GHL[ang]
Edwin H. Bennett by GFB[ergin]
Philip Henry Gosse by anon
Thomas M’Laren by M
There were about forty additions and some of the original articles were 'edited'!
Timothy
Sunday, Dec 16, 2018 : 00:38
Tom said ...

If anyone has a copy of the first edition, and could scan these 4 entries, that would be much appreciated.

Tom! I'm sending you by e-mail the four pieces from the 1st ed of Chief Men which (for one reason or another!) were omitted by HyP in his second edition. I fear that I am not a dab hand at scanning, but I'm sure you can tidy them up... Timothy

Tuesday, Feb 12, 2019 : 04:32
Doug Engle said ...
Gospel Folio Press in the USA reprinted this volume in recent years, it's available via https://www.gospelfolio.com/product/chief-men-among-the-brethren/ printed by Crimond House, if anyone desires a paper-copy. I also have several copies, I think just the 1st ed.

On a sidenote, I'm actively revising an exhaustive list of PB-connected authors (as well as authors of volumes of PB interest), using Arnold Ehlert's 1969 "Brethren Writers" as a base, and working my way forward with both living and deceased authors... linking to this site, as well as wherever else I find PDF's... as well as to publishers/distributors when in stock. In this case, I'm linking to both the purchase version, as well as your original (as some may want to hold a paper copy, and others pleased with a PDF).
Tuesday, Oct 20, 2020 : 06:59
Marty said ...

"Selection. In making the selection we have been nobly helped by aged brethren living, whose knowledge of early brethren was far beyond our own. Special help in this direction and in the securing of records and photos has been given by Mr. CHAS. E. FRANCK, of Paignton, his late beloved wife, and their many "early brethren" friends." From: "Chief Men Among the Brethren" Based on the above extract, I believe "CEF" is Charles E. Franck and not Charles E. Faithful.

Since his "late beloved wife" and Paignton are mentioned, I suggest this couple:

The only Charles Edward Franck I could find who died after 1931 is this one (so he must have remarried): In fact the marriage had taken place just a few months earlier: If he was born c.1870 and his father was called Joseph, this is probably his birth record: Charles Edward Franck was born in Madras, (c.1869), and died in Babbacombe, Devon (1934) . In c.1917 he married Frances Elizabeth Bewes whose mother was a Soltau and a 'great personal friend of J L Harris' . Many years ago I consulted the copies of the Christian Witness in the library of the Editors of Echoes of service which had belonged to one of the editors Mr W.R. Lewis. In a letter addressed to Lewis, Franck explained that the attributions of the anonymous articles were based on what J.L. Harris had told Franck's mother-in-law.  That would tally with Henry Pickering's reference to 'Mr. CHAS. E. FRANCK, of Paignton, his late beloved wife, and their many "early brethren" friends.'    Timothy Stunt