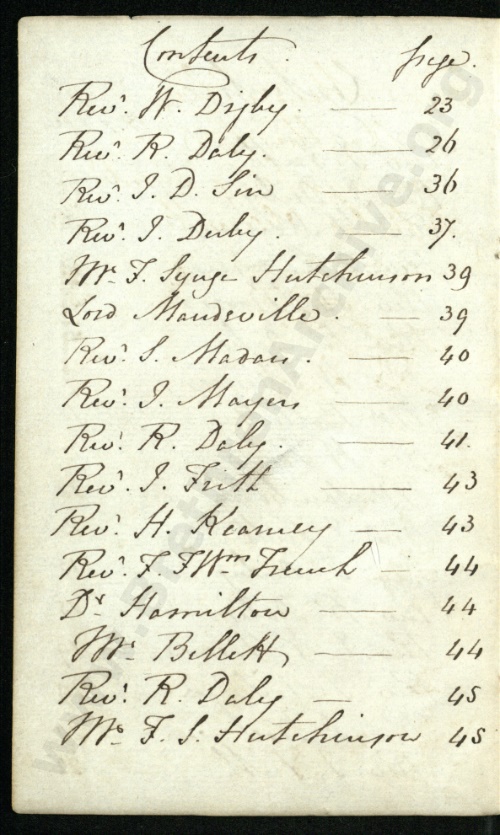 Rev’d. William Digby; "There is a useful bit of stuff on Rev W Digby in the biography of Le Poer Trench. Trench was a good friend and promoted him. Digby took prominent part in one of the big Bible debates with RCs in Carrick on Shannon in 1824. He was a deep student of prophecy and wrote a treatise in 1831 that S R Maitland combated in 1831 so it's not surprising to see Maitland criticised at the 1831 Powerscourt conference! Both items are on Google books. Another vigorous Protestant! Most intriguing is that in 1838 in Lausanne friends of Digby were promoting a work of his on prophecy. Doubtless I see a reaction to JND in this. see A Treatise on the 1260 days of Daniel and Saint John: being an attempt to establish the conclusion that they are years; and also to fix the date of their commencement and termination.  Author, William Digby, Archdeacon of Elphin.   R.M. Tims: Dublin; Hatchard & Son; J. Nisbett: London, 1831.

Another item available on Google Books, "A Short Historical Explanation of the Seals and Trumpets of the Apocalypse. By the Rev. William Digby. Translated from the French [by the author. With the text]", shows that M.Malan had a hand in it, plus a young pastor from Lausanne. Also that Digby had himself visited Switzerland . So there's quite an Irish link to Switzerland! How much of this was a cry for help to withstand JND?? Digby deplores those Protestants who give credence to futurist ideas which he sees as popish. Is this Darby?" Contributed, see further note in comments section below.

Tom said ...
Added some notes on Revd Digby that were sent to me.
Tuesday, Jan 26, 2016 : 11:32
samko said ...
Rev Frederick Fitzwilliam Trench. He was
related to Archbishop R.C. Trench, and Bishop Trench “The last Bishop of Tuam” and to George F Trench, fellow-gospel preacher with Sir Robt Anderson. F F Trench was the Perpetual Curate of Cloughjordan before becoming Rector of Kells. He edited “The Christian Journal” –only very few copies of which seem to be extant, alas, for it covers the period of the first phase of the Established Church Home Mission in which JND was a key figure, and concerning which JND wrote, mentioning F F Trench by name. (see STEMPUBLISHING for details). FF Trench spent a lot of effort to render relief in the awful Irish Potato Famine: see http://www.libraryireland.com/articles/RealitiesIrishLifeFamineSchull/.
Since FF Trench was so involved with the Home Mission, concerning that topic see JND “Thoughts on the present position of the Home Mission”
“The Notion of a Clergyman…”
and in “Further remarks upon Righteousness and Law “ is this crucial paragraph, whose importance for understanding JND’s early clerical life is not to be underestimated.
"But a little more history before I turn to doctrine. Mr. Trench refers to the Irish Home Mission, in which the old Home Mission took its rise. I also had part in setting the former a-going, a little more perhaps in its first organization than I suppose Mr. Trench would like now to allow; but it is of little matter. I admit fully, that Mr. Trench, by his capacity for arrangement and activity, was, as to its establishment and carrying on as a matter of business, the efficient instrument, working in it actively too. But I will refresh his memory, how what grew out of it came to be "old." As he says, clergy worked in it, but very few; a few however did. Many of the "Brethren," perhaps some Dissenters. I do not recollect them; but, in principle, any one who truly preached the gospel; and it went on, and circled pretty much all Ireland round — I hardly know a county I was not in myself. I have no boast to make of it. We all did our best. It had planted itself pretty substantially in many quarters; and the clergy, I suppose, began to think a work thus rooting itself into the country ought not to be left out of the hands of the clergy. However that may be, Mr. Trench went to Dublin and came to an arrangement with the clergy (guided, I suppose, by sound sense), that they should take it up, and what they call the laity be turned out of it. Mr. Trench came down to me at Limerick, and told me of it, saying, I was sure of your largeness of heart, and that you would join in the plan. I replied: "Impossible. I was delighted to have the clergy preach where they would; but when it is the clergy as such to exclude others whom God has sent and blessed, I cannot. It is against my principles, and certainly not my place." And we, laymen if you please, went on as far as we could, on a smaller scale, doubtless, but with a good deal of blessing; and, in a very short time, the various prelates, who could not hinder the laity and a mixed set of preachers, put a stop to the clergy doing so, and it became the "Old Established Church Home Mission." Mr. Trench told me when we met about it, that it was the only thing he regretted doing in his life. It is not the only thing where his common sense has been baffled by his clerical friends."
Tuesday, Jan 26, 2016 : 23:08
samko said ...
Wm Digby a key figure in the Irish Evangelical Revival. Archbishop Trench was Digby's convert !
Wm Digby and the conversion of Archbishop Trench (of Tuam). [excerpted from Alan Acheson’s article “The Evangelical Revival in Ireland, A study in Christology”] www.churchsociety.org/docs/churchman/108/Cman_108_2_Acheson.pdf
"In his letter of 1816 to his bishop, Archdeacon Digby told Trench that 'the true import and meaning' of justification had not yet been revealed to him. It meant imputation of Christ's obedience to believers, so that they 'become invested with the righteousness of God himself'; while 'the application of the Redeemer's work to us individually, that we may be saved, is the work o f the Holy Ghost, who works in us a most holy faith' .There was enough gospel here to save a bishop, and Trench thus came to living faith in Christ."
Tuesday, Jan 26, 2016 : 23:46
samko said ...
Rev. Joseph D’Arcy Sirr,
Rector of Kilcoleman, Diocese of Tuam at the time of the Powerscourt Conferences. He subsequently became alarmed about the impact of JND’s outreach in Co. Mayo and wrote two pamphlets against Darbyism.
"‪Reasons for Abiding in the Established Church: A Letter to the Rev. Charles Hargrove‬." 1836. Also wrote “Westport Darbyism Exposed” 1843, mainly directed against John M Code, who had seceded from the C of I to join the Brethren (Darbyites).
Joseph D’Arcy Sirr (1794-1868) was a son of Henry Charles Sirr. He was educated in T.C.D., graduated B.A. in 1812 and was ordained in 1818. He graduated M.A. in 1823, and was appointed rector of Kilcolman, Claremorris, County Mayo 1823-44. 1844-46, incumbent of St Mary’s, Spital Square, London, 1846-49, and rector of Morestead, near Winchester, 1849-68. Reverend Joseph Sirr died on 5 April 1868.

[Ed “Westport Darbyism Exposed” is available on the Historical Docs page]
Wednesday, Jan 27, 2016 : 00:01
samko said ...
Francis Hutchinson, - 1802-1833
Francis Hutchinson was the son of Rev. Sir Samuel Synge, Archdeacon of Killala (who assumed the additional surname of Hutchinson on succeeding his uncle). He was born on 18th January, 1802, and fell asleep in Jesus on 3rd April, 1833. He married the sister of the Earl of Donoughmore and left two sons and one daughter. His eldest son succeeded his grandfather in the Baronetcy.
Francis Hutchinson deserves a special niche in any work of reference to the "Chief Brethren," for not only was he one of the first who met together for "the breaking of bread," according to primitive custom, on the first day of the week, but it was at his house, No. 9 Fitzwilliam Square, Dublin, that the little company were led to come together in the Name of the Lord Jesus, owning the presence and sovereign action of the Holy Spirit in their midst. The brethren continued to meet for some time in Fitzwilliam Square, and others were gradually added to their number. (excerpted from the entry in HyP’s “Chief Men among the Brethren”) He was a student of Prophecy and wrote a couple of articles in the “Christian Examiner”. I’m told the also wrote a couple of pamphlets, which I have not seen.
Wednesday, Jan 27, 2016 : 00:13
Samko said ...
Dr Hamilton: ----------Probably Rev Hans Hamilton DD ,(1776-1839) Rector of the Union of Knocktopher and Kilmoganny in the Diocese of Ossory, a long time intimate friend of Rev Peter Roe. Hans Hamilton was very evangelically minded.
Refered to as “Dr Hamilton” in p75 and p461 of Rev Samuel Madden’s “Memoir of the life of the late Rev. Peter Roe A.M.” Dublin, Curry. 1842.
This Dr Hamilton had a niece called Isabella Hamilton who was the wife of John Synge of Roundwood, --a sometime chairman of the Powerscourt Conference after Rev Robt Daly ceased connection with the Powerscourt Conference.
Sunday, Jan 31, 2016 : 01:32
Reearcher said ...
On page 209 of his book 'Lives Less Ordinary - Dublin's Fitzwilliam Square 1798-1922', published by the Liffey Press 2011, Andrew Hughes writes: