To Page: Inside Cover 1
To Page: Flyleaf 1 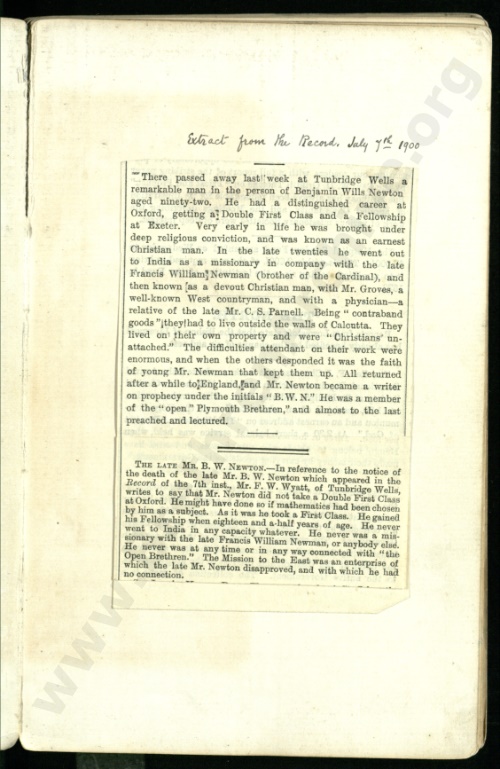 "There passed away last week at Tunbridge Wells, a remarkable man in the person of Benjamin Wills Newton, aged ninety-two.  He had a distinguished career at Oxford, getting a Double First Class and a Fellowship at Exeter.  Very early in life, he was brought under deep religious conviction, and was known as an earnest Christian man.  In the late twenties, he went out to India as a missionary in company with the late Francis William Newman (brother of the Cardinal), and then known as a devout Christian man, with Mr. Groves, a well-known West countryman, and with a physician; a relative of the late Mr. C. S. Parnell.  Being "contraband goods", they had to live outside the walls of Calcutta.  They lived on their own property and were "Christians' unattached."  The difficulties attendant on their work were enormous, and when the others desponded, it was the faith of young Mr. Newman that kept them up.  All returned after a while to England and Mr. Newman became a writer on prophecy under the initials "B.W.N."  He was a member of the "open" Plymouth Brethren, and almost to the last, preached and lectured.

THE LATE Mr. B. W. Newton.---In reference to the notice of the death of the late Mr. B. W. Newton which appeared in the  Record of the 7th inst., Mr. F. W. Wyatt, of Tunbridge Wells, writes to say that Mr. Newton did not take a Double First Class at Oxford.  He might have done so if mathematics had been chosen by him as a subject.  As it was, he took a First Class.  He gained his Fellowship when eighteen and a half years of age.  He never went to India in any capacity whatever.  He never was a missionary with the late Francis William Newman, or anybody else.  He never was at any time or in any way connected with "the Open Brethren."  The Mission to the East was an enterprise of which the late Mr. Newton disapproved, and with which he had no connection.