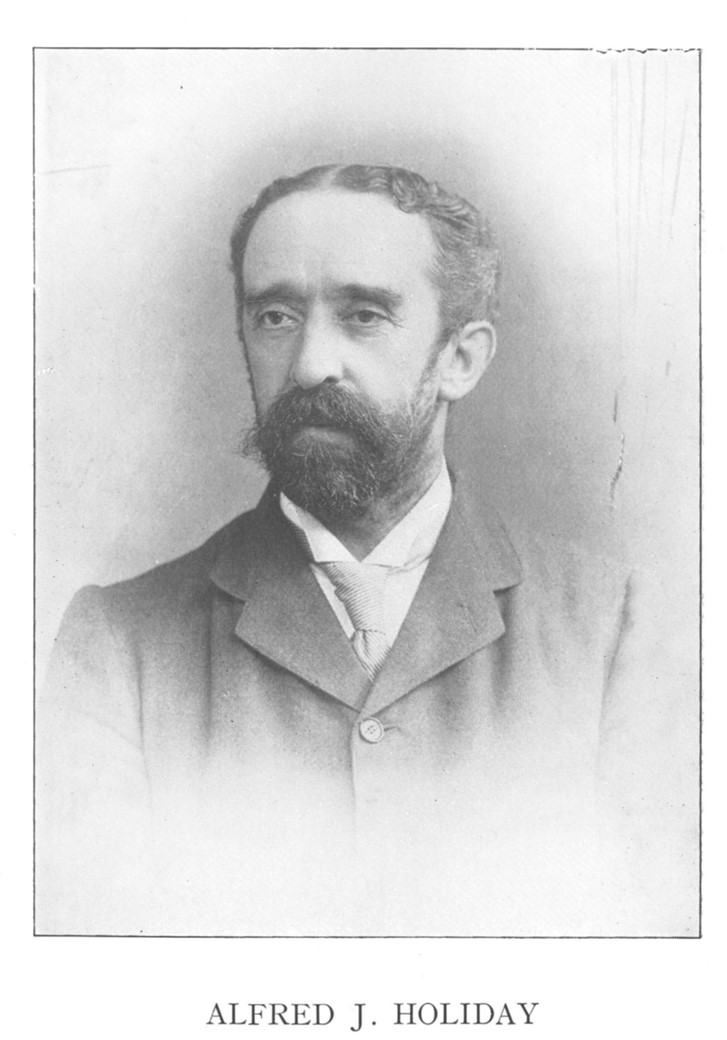 ALFRED J. HOLIDAY was born and educated in London. He had the advantage not only of an excellent education, but of being brought up in an artistic and literary circle, and this had a life-long effect upon his character.

Brought to the Lord at the early age of 16, he at once dedicated his energies to the Lord's work, and from the first he was no half-hearted disciple. The manner of his conversion was unusual. One Sunday evening at church, hearing the Gospel clearly stated, he believed and was saved, although he had had no previous soul exercise. After the service he said to his companion, "I am saved, " and to his joy his friend replied, "So am I."

The new wine could not be kept in old bottles. At once they told their friends, a good number of whom professed Christ. Not long after this, Reginald Radcliffe, the lawyer-preacher, found him out and encouraged him to preach. This he did, and held large open-air meetings with great blessing at Primrose Hill and elsewhere in London.

The Lord thus prepared him for his life-work, and nothing more characterised him than the simplicity of his Gospel preaching and his joy in, as well as aptitude for, open-air work, and to the last in the open-air he was always at his best. The earnest young preacher was about this time introduced to the saintly Howards of Tottenham, who, Aquila- and Priscilla-like, expounded the Word of God more fully unto him, and so led him out of the bondage of system into the happy liberty of simplicity of worship and privilege of remembering the Lord in the breaking of bread.

Business took him to Birmingham, where his activity in Gospel work was much appreciated. In that city also the greatest event of his life next to conversion took place in his marriage to Miss Atchison, of London. The result was most happy, and he found in her a true helpmeet and one with whom he could have real fellowship, both spiritually and intellectually. After a few years he removed to Bradford to become financial manager to Lord Masham, then Mr. S. C. Lister, whose good will and confidence he gained in a marked manner. The little assembly in Bradford soon felt the effect of the coming into their midst of those two warm-hearted believers; but, alas! dark days followed, and a long illness completely laid him aside and made work impossible. When restored, the little company was sadly reduced, meeting in a most unsuitable room known as "Uncle Tom's Cabin." But the old energy and strong faith prevailed. Active aggressive work was engaged in. In music halls and tents the Gospel was preached. Messrs. Inglis, Willington, Marshall, Hopkins, and many others helped. The work went on and the Assembly grew apace, but, as Willington at the time aptly remarked, speaking of the young converts, "They will bide a deal of nursing." This proved to be true. So a new side of Alfred Holiday's character was brought into play, and this proved to be a very strong side, viz., the pastor. For years, wet or fine, he spent each week one long evening in visiting, seldom getting home before midnight. His gift as an organiser and his power and tact in getting others into work made themselves felt.

He was loving and generous to a fault. He taught what he believed strongly, yet never harshly, nor did he harbour unkind thoughts. With him it was easy to forgive and forget. It may be mentioned as characteristic of the man that one year when there was special distress in Bradford, in order to encourage simple habits, he himself went without meat, the money thus saved being given to the poor. He was a most generous giver, and did not offer that which cost him nought, going again and again without things lawful, and in the eyes of some needful, that he might have the more to give away. He could not save or put by for a rainy day whilst he knew of present need.

For the last thirteen years of his life he had lived at Featherstone as manager for Lord Masham's estate and colliery there. He was used to build up a vigorous assembly in that place, there being none when he first went to live there.

As a gifted teacher, able to express himself in a clear and forcible manner, his ministry at Conferences was much valued. Assemblies in difficulty seemed naturally to turn to him for counsel, and he must have travelled thousands and thousands of miles on such errands, giving up many hours of sleep in his efforts to smooth over difficulties and bring brethren together.

Mr. Holiday's end on February 8th, 1905, was not only peaceful, but triumphant. The outer man perished, but the inner man waxed strong. During the last four hours, notwithstanding great physical weakness, his spiritual joy increased so that it seemed that he had a sight of the Glory. Amongst other words, he said: "I have had many happy, happy years of service for the Lord down here, but now I am to be promoted higher, higher, higher."

Picture of grave (from Ancestry). Friday, Jan 11, 2019 : 18:35
Samuel said ...
The "Chief Men" biographical account does not mention that AJH was on the editorial panel of the periodical "Needed Truth" for the first two volumes of its issue. (1888-1890).
HIs prolonged illness is cited as the reason for him ceasing contributions to it. (see the end of volume 3 elsewhere on this website in the Periodical Section). It seems that when the impending official secession of Needed Truth brethren occurred in 1893, AJH had already distanced himself from the seceders, though not from much of the doctrine usually thought of as specific to "Needed Truth" ecclesiology. He wrote an important pamphlet called "The Churches of the Saints" to which J.H. Burridge replied critically in <
Sunday, May 24, 2020 : 03:44