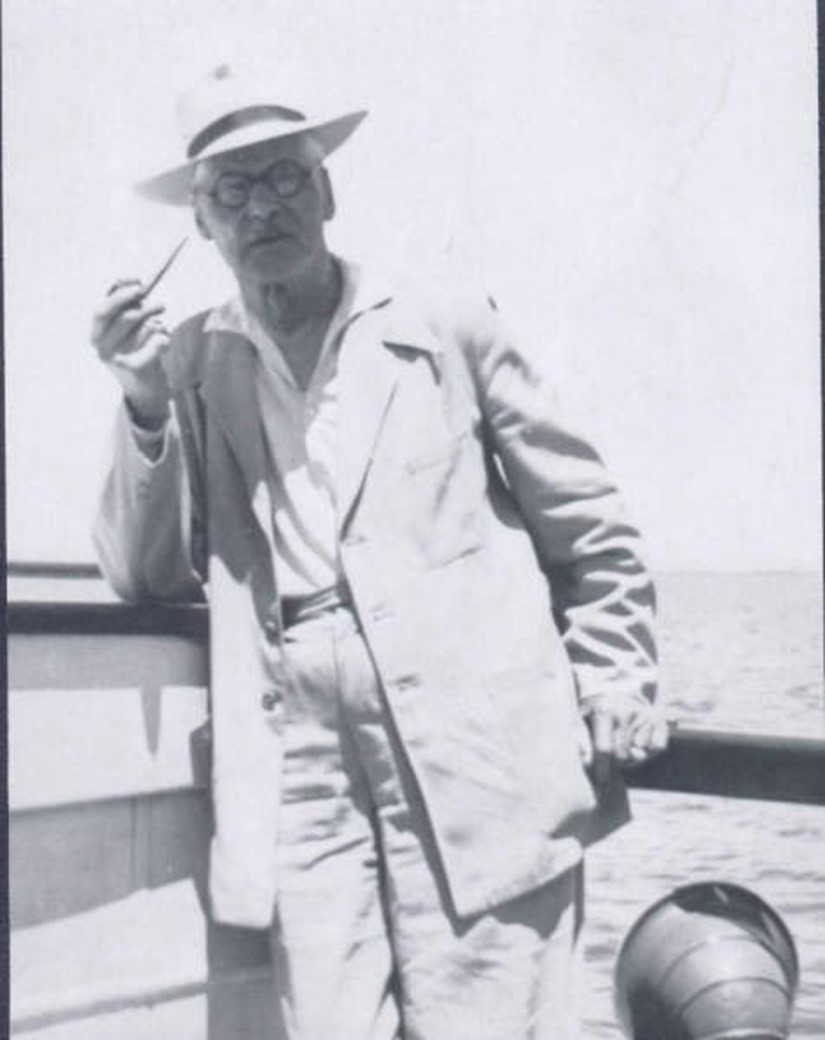 I was told;
"Jem, because of his childhood experiences, was strongly anti-religion, hence father and son did not get on. Alfred's difficulty with his father appears to date from an experience in his childhood when he was nearly killed by a mob who set fire to the pub he and his mother were living in because the mob were upset with Jem. (Jem was not there at the time)
In spite of Jem's expressed anti-religious views, when he died Alfred officiated at his religious funeral."
Tuesday, May 2, 2017 : 13:05
Rodger said ...
Another picture of Alfred Mace: http://www.thegloriousgospel.ca/mace-alfred/
Tuesday, May 2, 2017 : 13:51
Tom said ...
Good find! Have asked if can use that one too.

Mr. Alfred Mace was born in Norwich, England, January, 1854, and died September, 1944, at the age of ninety years, eight months.

It was my privilege to know Mr. Mace for over a period of thirty years. My parents attended his second wedding in Chicago, to Dr. Grace Atkinson of Canada. Mr. and Mrs. Mace travelled together to all parts of the English speaking world, for thirty years. On each visit to Chicago they found a warm welcome in my parents’ home. Mr. Mace and I had many personal visits together over the years.

Mr. Mace was a large man in stature, the son of Gem Mace the last world champion bare-fisted prize fighter. A perfect gentleman and a man of God who could preach the Word with clearness and power. He was associated, in England, with some of the great Bible teachers of his day, among them J. N. Darby, William Kelly, C. H. Macintosh and others. He often preached the gospel with George Cutting who wrote the tract Safety, Certainty and Enjoyment which has been used much of God in the salvation of souls. Mr. Mace often spoke of his great respect for William Kelly. When many others did not hold fast to the truth of the One Body, and that all believers had a right to the Lord’s supper—unless scripturally disqualified—he did. From the first time I met Mr. Mace he was of the same opinion, and ever ready to minister to all Christians who gathered in Christ’s name.

His ministry centered around the Glorified Man now in heaven—the Lord Jesus Christ. He loved to show the difference between the sacrifice of the Old Testament priests and that of the Lord Jesus Christ in Hebrews 10:11, 12. The Old Testament priests could never sit down. They offered “often the same sacrifices which could never take away sins,” while Christ “after he had offered one sacrifice for sins sat down in perpetuity at the right hand of God” (JND trans.). Christ will never have to arise to offer another sacrifice for sins. God has accepted that sacrifice and His blood in heaven—now “we have boldness to enter into the holiest by the blood of Jesus, by a new and living way.” “We have a high priest over the house of God” (Heb. 18:21). “Our sins and iniquities are remembered no more” (Heb. 10:17). “He hath made us accepted in the beloved” (Eph. 1:6). Many Christians know these things in theory but they are more wonderful when faith makes them real and we believe them.

Mrs. Mace had gathered many hymns from around the world with thoughts of publishing a hymn book. When it did not materialize she took great pleasure in helping with the compilation of Choice Hymns of the Faith hymn book. It was my privilege to spend a week with them in their home in British Columbia in the 1940’s to check hymns with her.

In 1937 she was troubled with asthma and they decided to move to Tucson, Arizona, where we also lived at the time. They arrived in time for Mr. Mace to speak at my wife Elma’s funeral. Mr. Mace passed away in 1944 and she continued living in Tucson where she spent the rest of her days.

After we left for Tennessee and returned at different times for meetings, she always insisted that my present wife, Lena and I, should stay in her home. It was a joy knowing both Mr. and Mrs. Mace and only eternity will reveal the results of his ministry in the lives of such brethren as Harold Harper, Alfred P. Gibbs, George M. Landis, myself and many others. Mr. Mace lived and walked in the presence of his Lord, the Man in the Glory! He, Christ, was his all in all (Col. 3:11).

I personally recall my acquaintance with this great man of God. He not only taught me the Scriptures from the platform but also in personal conversations. One occasion, I asked him the meaning of the one baptism in Ephesians 4:5. As I sat with my Bible open, he said, “It will help you to notice the Trinity is mentioned in these verses.” Verse four says, “There is one body and One Spirit.” We know that it is by the baptism of the Holy Spirit that we become members of the one body (1 Cor. 12:13). Verse five then says, “One Lord, one faith, one baptism”—that’s water baptism for those who acknowledge Jesus as Lord. Then in verse six it says, “One God and Father over all.” His remarks helped me to see clearly that the “one baptism” is water baptism. Thus, I have thanked God every day of my life that I heard and knew personally Mr. Alfred Mace.