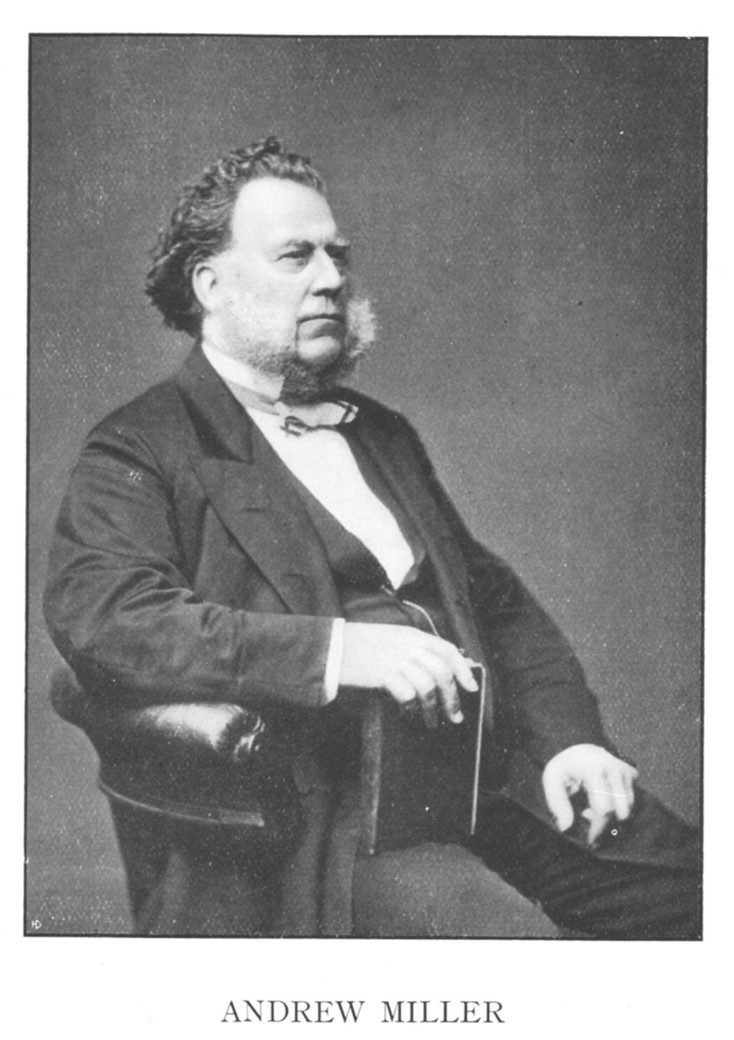 Andrew Miller was born in the village of Kilmaurs, Ayrshire, on 27th January, 1810. As a young man he entered the firm of Smith, Anderson & Co., Glasgow, eventually taking up the London Branch of the firm, after­wards changed into Miller, Son & Torrance, of Cannon Street.

Whilse supervising a large London business, Mr. Miller was for a considerable time the voluntary pastor of a Baptist Church in William Street. As light from the Word of God was followed the sectarian principles were left behind, and the believers gathered on Scriptural lines; Mr. Miller continuing to labour as an honoured brother amongst them.

As a warm-hearted Evangelist, the best of the man was ever visible. He was greatly used in the conversion of souls, both amongst old and young. It was no uncommon thing for the preacher to bathe his impassioned appeals with tears while he pleaded the claims of the Master he loved. In fact, he was called by many "the Rutherford of brethren."

As an author his name will be remembered as long as his valuable "Papers on Church History" or his Medita­tions on the Song of Solomon, on the Psalms, and other themes continue to be read. If they were more known they would be more valued. He encouraged the writing, wrote the introduction, and largely helped to finance the issues of C.H.M.'s "Notes on the Pentateuch, " the most popular and extensively circulated of all the varied volumes con­nected with what is known as "the Brethren movement."

Telling how he had been led to cast in his lot with those who thus gather to the Name of the Lord Jesus, and to break bread every Lord's day, he said he had been a member of a Church for some time previously, when one day he was invited by a Christian gentleman to attend a Bible reading which was held in his drawing-room each week. "I accepted the invitation," he said, "and went, but such a stranger was I to that kind of thing that I went in full evening dress, and found myself the only one so attired, which made me feel very uncomfortable. We were invited into the dining-room for refreshments, and then adjourned to the drawing-room for the Bible reading. After prayer a passage of Scripture was reverently read, and a deeply interesting con­versation followed. As I listened to the unfolding of the Inspired Volume I began to discover that the Bible contained such wonderful truths, to which I was an entire stranger, that I soon forgot my 'evening dress,' and made up my mind to attend the next weekly Bible reading if the host would invite me. This he did, and I attended week by week, learning more and more the wonderful truths of God, and becoming better acquainted with the great purposes of redeeming love and grace. Thus I was led to cast in my lot with the so-called 'brethren. ' "

On another occasion he told how he was led to begin to preach and to speak publicly. Having to visit the North of Ireland in connection with business matters during the Revival of 1859-60, he had been an eye-witness of some of those wondrous scenes of spiritual blessing when many men and women were stricken down to the ground under the convicting power of God's Word, and were con­strained to cry out publicly for mercy. Souls were saved, backsliders were restored, and believers were revived and blessed. On returning to London, Mr. Miller could not help but tell his friends what he had seen and heard. These friends at once said : "We must not keep these good things to ourselves, but we must invite our friends and neigh­bours together that they also may hear of this marvellous work of grace. " Drawing-room meetings were convened, and Mr. Miller was invited to give an account of the Re­vival work in the North of Ireland. In this way he was led out into public service for his Lord.

He had a passion for souls, and was a true Evangelist, as well as a spiritually qualified teacher. He saw the multitude, and his soul was stirred. Rarely ever did he preach the Gospel without tears, and he told me how it grieved him to his heart to find the growing apathy in Gospel work among the saints in the different assemblies he visited.

"In labours more abundant" for half a century, in suffering scarcely less so near the end, Andrew Miller fell asleep on 8th May, 1883. In the eventide of retirement, as he looked back upon the past, around on the then present, and forward to the future, he exclaimed with great emphasis of soul, "Nothing counts but Christ."

Lyndon CHAPMAN said ...
looking for my Great Grandfather, Belonged to Plymouth Brethren, (Miller)
Apparently book written by him, which is why this notice. Found out by a Friend of the Free.
Grandmother, Rosina Miller (Maiden Name)
Any point of direction greatly appreciated.
Wednesday, Feb 6, 2019 : 20:11
Tom said ...
Hi Lyndon, I don't see that this Andrew Miller had a daughter called Rosina. Maybe if you had some dates for her, it could be easier to check this though?
best, Tom
Thursday, Feb 7, 2019 : 01:40
winston james huggins said ...
Thank you for this sight to read it has now made me feel so complete thank you.
Sunday, Nov 29, 2020 : 00:04