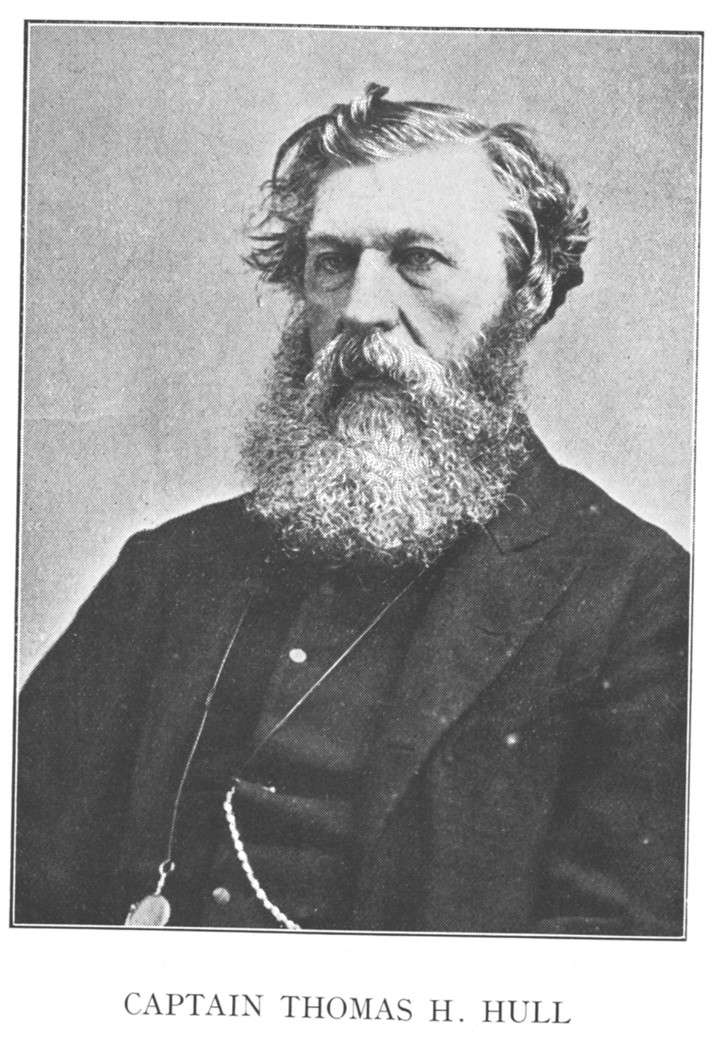 THOMAS HILLMAN HULL was born in 1809 at Marpool Hall, Withycombe, Raleigh, Exmouth, the family estate (being Lord of the Manor), and entered the Indian Army as a young man, where he became a distinguished officer. He had to leave the army through ill health, but God's purpose was that he should become "a good soldier of Jesus Christ."

He was brought to know the Lord through the agency of Mr. and Mrs. Anthony Norris Groves of Coonoor, S. India. These devoted servants of God received into their own house the broken-hearted young husband and his young wife who was dying of consumption, and they were the means of the conversion of both, so that the young wife died in perfect peace.

Capt. Hull returned to England, invalided from the army, but henceforth to live for Christ. Later on he married again one who was also a devoted Christian, and settled in Exmouth, where he was greatly used of God. He was an accomplished scholar and a clever and effective speaker. For many years he gathered large audiences in the Exeter Road Room, which had been built by his brother for the use of the assembly of Christians gathering there. It was a common sight to see a queue of people waiting for the doors to open when he proclaimed "the unsearchable riches of Christ," and many were brought to the Lord, and led on in the Christian life by his teaching. He was prominent and active in preaching the Gospel in the open air. The "common people heard him gladly." He was also busy in teaching and instructing the saints in the various local assemblies, attending most of the annual and quarterly meetings in the North and South of Devon, ministering the Word. It would be impossible to speak of the many whom he led to Christ; and he was always seeking opportunities for service in train, on race course, and tract distribution. God graciously used His dear servant to the conversion of very many. He was always very humble, "esteeming others better than himself. "

On April 18th, 1880, at 8 o'clock on the Lord's Day morning, he peacefully "fell asleep," after a short illness. He had greatly valued, just before this week's illness, a visit of a few days from Mr. R. C. Chapman of Barnstaple, a friend of many years. To one who was caring for him he said: "I am not dwelling on what Heaven will be like; I am swallowed up with the thought of seeing Jesus." Two, if not three, of the earlier generations of Hulls lie buried in an allotted portion of the yard at the east end of the ancient church of St. John; but William, Squire Hull, and Thomas Hull are buried in a small enclosed cemetery at Withycombe, given by the former for the use of Christians meeting in the Exeter Road Room.

Miss M. A. Hull, the authoress of that well-known and popular hymn, "There is life for a look at the Crucified One," was a sister. A well-known evangelist writes: "Whenever I pass Marpool Hall, now occupied and owned by others, I am always reminded of the Hulls and the Haldanes of Scotland. The devotion, self-sacrifice, and whole-heartedness to the cause of Christ of these two aristocratic families were remarkable, and should cause deep searchings of heart."

He is referenced briefly in, "An Ellusive Quest ... "