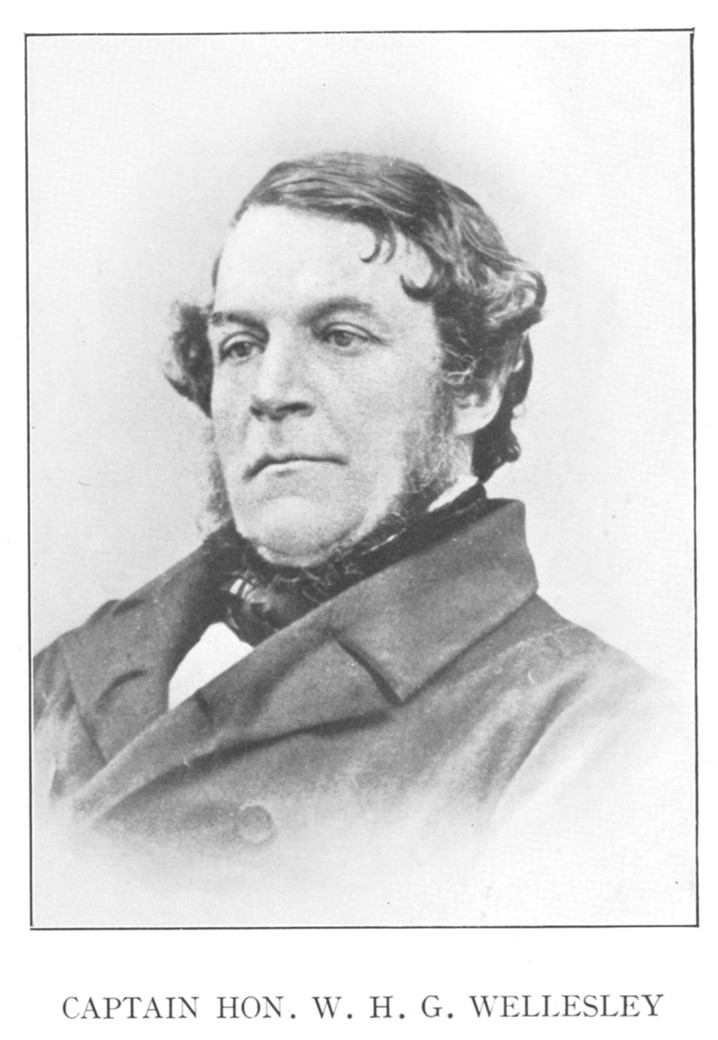 CAPTAIN HON. WILLIAM HENRY GEORGE WELLESLEY was the second son of the first Baron Cowley, born in 1806 and died 1875. He was a nephew of the great Duke of Wellington, the Iron Duke.

Mrs. E. TROTTER writes: "Weary with the strife of sect and party, and inspired with a profound longing to conform in life and practice to the Apostolic ideal, little companies of earnest men began to meet in the early part of the nineteenth century, in various parts of the country, unknown to each other, and under no human leadership. . . . The inception of this movement arose from a new illumination of the Personality of Jesus Christ. Here was a vision; this was the burning secret at the core of life, transforming it from within and without.

"I have seen the face of Jesus—
Tell me not of aught beside,
I have heard the voice of Jesus—
All my soul is satisfied."

In this light all other lights paled. Among the men who were affected by it were men of brain, born leaders, men of birth, of large means, scholars, and students, who would have made their mark at any time and in any walk of life; lawyers of acute critical judgment, officers of promise in both services, and large landowners.

The inspiration came to them at first alone, and not under the influence of large multitudes, neither did it die out, but energised and sustained them in lives of unusual toil and unusual length."

Among the men of birth was Capt. WELLESLEY, who suffered a great deal for the Master's sake in the stand he took in taking up the Cross, forsaking all, and following the Lord.

In the early days of the movement his name is frequently met with at conferences and special gatherings of brethren, where his weighty words of ministry or earnest, loving Gospel addresses always made an appeal to all who were privileged to hear him.

JOHN HAMBLETON says of him: "One great feature in this Revival is, that God has raised up men of affluence and influence to receive those poor labourers into their dwellings who have, in this world, neither one nor the other to recommend them. One honourable gentleman, Capt. Wellesley, who had forsaken this world's wisdom and greatness that he might become wise in Christ, received me into his house. . . . He was well taught in the Word, and saw death and resurrection to be the key of the whole Scriptures."

Death and resurrection culminate in Him. And this is the Gospel that Christ died for our sins, and was buried; the third day He rose again, according to the Scriptures; and the redeemed creation will yet rise with Him from its groans and cries, into the bloom and beauty of immortal life.

Michael Schneider said ...
This is probably one of the most uninformative and platitudinous biographies to be found in "Chief Men" ...
Wednesday, Jan 23, 2019 : 00:12
Tom said ...
Yes most disappointing .. it says nothing at all about him! There are little bits of ministry of his in some of the OB conferences notes from that time, but I have nothing else.
Wednesday, Jan 23, 2019 : 01:56
Michael Schneider said ...

Here are a few snippets from the British Newspaper Archive:

This item may be by him; https://www.brethrenarchive.org/bookshelf/books-and-pamphlets/unknown-author/the-lords-supper-to-the-children-of-god/

According to Arthur Augustus Rees, Welleley's conversion had 'originated in the contemplation of the horrors of the Battle of Navarino' in October 1827, but he only retired from the navy some years later in the 1830s. (J Everett, The Mid-shipman and the Minister [London 1867] p.12.  An unknown writer describing the meetings of the Evangelical Societies at Exeter Hall in the mid-1830s recalled Captain Wellesley's 'speaking trumpet of a voice', (Anon., Random Recollections of Exeter Hall in 1834-37 [London 1838] p. 124.) This would presumably have been before the Captain was associated with the Brethren in Hereford.  Charles Stanley recalled Wellesley preaching in 1844 (The Way the Lord hath led me: or incidents of Gosel work [London 1889].    Timothy Stunt

Michael is right about the lack of information and the surfeit of platitudes in the article.  C E F[?aithfull] recycled the last sentence of his quotation from Mrs Trotter in his slightly more informative article on William James Stokes. It was also used in the anonymous article on Richard Hill.  In the even less informative (anonymous) article on Francis Hutchinson, Henry Pickering was happy to recycle almost all of the passage used by C.E.F in the article on Wellesley (including Mrs Trotter's quotation of the lines by Mrs Frances Bevan).  It is possible that Henry Pickering thought (mistakenly) that William Trotter was related to Mrs T as the article on William T closes with a further (repeated) quotation from Undertones of the nineteenth century.

There were two editions of Mrs Edward Trotter's book (1905, 1916) of which there are copies in the British Library and Cambridge UL.  Her maiden name was Annie Dewhurst (1850-1920) and her family were cotton manufacturers.  Her husband was a son of Captain John Trotter of Dyrham Park (near Barnet, N. London) where he hosted Count Guicciardini during his exile.  Edward's sister Maria was married to Francis Augustus Bevan, a step-son of Mrs Frances Bevan, the hymn writer.  Annie Trotter also wrote a very imprecise biography of Lord Radstock.   Timothy Stunt