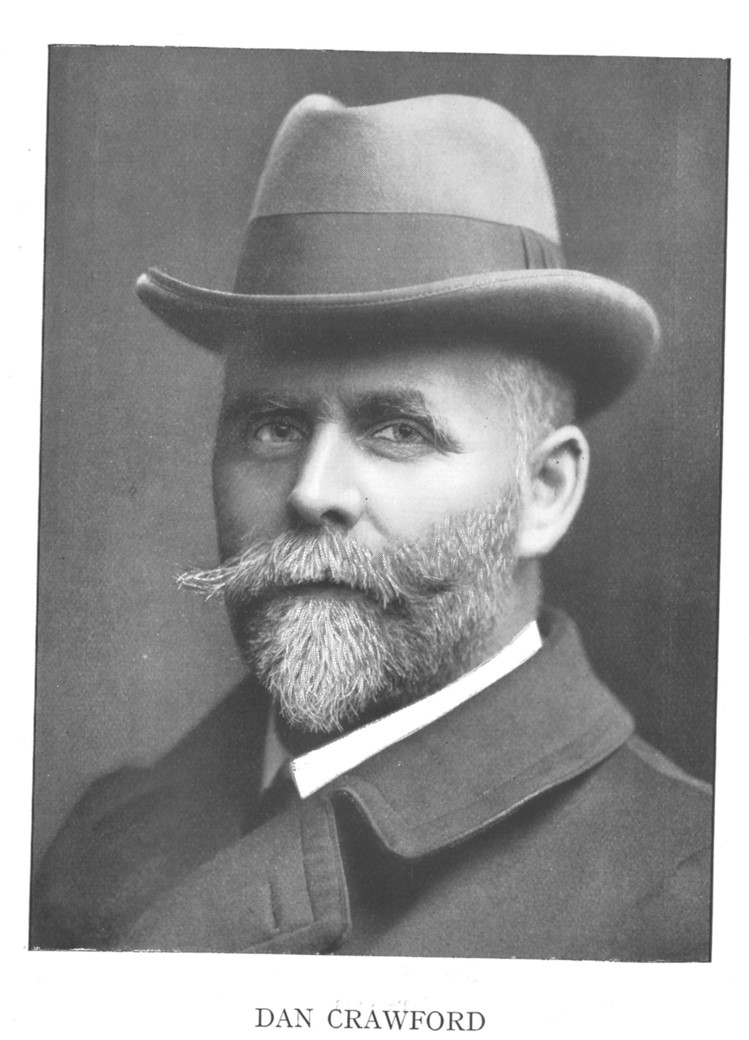 DAN CRAWFORD was fellow-worker and then successor to FREDERICK STANLEY ARNOT, as Fred Arnot was the true follower and successor of DAVID LIVINGSTONE, the father of African pioneers and missionaries.

Mr. Crawford was bom in Gourock, situated at the mouth of the Clyde, in 1869 A.D., and was led to Christ by a working man drawing a line across the floor of the Gospel Hall, and urging him to decide before he crossed that line. He has both written and repeated the story,  concluding: "At 20 minutes past 10, by grace I crossed that line."

At once he became a diligent student of the Scriptures, and a ravenous reader of good books, thus laying a good foundation, to be manifest in his labours in Africa, and in his letters to friends throughout the world. Acquaintances of early days say that from the first he manifested that out and out daring and individualism which ever characterised his service.

After a few years in his native town, during which he was diligent in service, he was led to volunteer for service in Central Africa. Meeting the stripling going forth, the veteran missionary, HUDSON TAYLOR, reminded him of the trials ahead, but encouraged him that "whilst the Devil might build a fence around him, he could never erect a roof over his head, communication with the Holy Hill would ever remain unbroken" (Psa. 3. 4).

Along with Mr. and Mrs. Arnot, Dr. Fisher, Tom Morris, Fred Lane, George Fisher, Archie Munnoch, Jeanie Gilchrist and others, he went forth in 1889, landing at Benguella, on the West Coast. On the way to Bine they had their introduction to the infamous slave caravans, "one such took nearly three hours to pass, a horde of 800 souls, all doomed to exile for life. " After spending some time in Bihe, 200 miles inland, he had many thrilling experiences before reaching Garenganze, 1000 miles farther inland, which he did just 32 months after leaving the Homeland. Little did Mr. Crawford think that in this remote spot in the heart of Africa he would spend 22 years before sighting the Homeland shores.

The great chief Msidi was then in power in Garenganze district. His despotic rule, 500 wives, sickening beer drinks, butchery of myriads of natives, and unmentionable atrocities only deepened the impression that the Messengers of the Cross had found a needy spot, and one likely to manifest Gospel triumphs.

After the death of Msidi the missionaries divided. Mr. Crawford got a grant of land from the Congo authorities, and gradually formed a model African village at Luanza, which has proved a centre of blessing morally and spiritually throughout a very wide area.

Here he built what he termed his £30 mission house, a comfortable building overlooking Lake Mveru, In this he entertained the King of the Belgians about 1916. Dan loved to tell how, while they were sitting on a bluff overlooking the great lake, he got the desire of his heart by the King asking him to explain the difference between Protestant and Catholic Missions. "For three quarters of an hour I let him have the Gospel of the Grace of God as plain as ever man heard it."

Concerning these solitary years in Africa, the British Weekly rightly points out what was probably the one recreation and safeguard from monotony of this devoted worker in these words: "The solitude of Africa had deepened a genuine gift for philosophy, so that Dan Crawford had attained at a leap and intuitively what others may at best only arrive at by the help of formal writings. His acquaintance, during all those years of willing exile in the heart of Africa with contemporary affairs in Great Britain, in Europe, and America, and throughout the world, was a constant mystery to those to whom he spoke intimately."

After 23 years work, which it would take pages to recount, along with his wife he came home on furlough in 1912. His first book, which he had long been preparing, entitled "Thinking Black," was issued in that year. It ran through two or three editions, was proclaimed by reviewers "a missionary classic," and we understand yielded in royalties some £2000 for native schools in Africa.

The reading of the book, the unique and soul-stirring addresses which Mr. Crawford delivered, his rush from town to town, his being lionised yet remaining unspoiled, are too well known to need description. He consorted with all sorts of persons, but usually had a word for his Master. A typical case in London: One night in the Whitechapel district, seeing a number of poor men entering a building for "a 3d. feed, " he buttoned up his collar, pulled down his slouch hat, entered and dined as a down-and-out. The next night he was to address a distinguished company in the West End, probably connected with the Royal Geographical Society. Peers, baronets, and men of various titles and distinctions were present. He related with relish the contrast of the "feed" of the night before, taking care to emphasise that for poor or rich a greater banquet was alike free (Matt. 22. 4).

The degree of F.R.G.S. was awarded at this time, and if anyone deserved it for enlightening the members concerning untrodden wilds and first-white-man pioneering in dark-man's-land it was D.C. He was one of the earliest to revisit the spot where DAVID LIVINGSTONE'S heart lies buried under a tree, when his body was brought home and laid to rest in Westminster Abbey. Finding the place overgrown and the memorial almost effaced, he took steps to have it put in order.

Having toured Britain, he crossed the Atlantic and visited many towns in Canada and the United States; also in Australia. In each place halls were packed and souls were stirred.

Finishing a furlough—deserved, fully utilised, and probably unique in every way—with his wife he returned to Luanza in 1913. A regular system of letters issued through a printer in Elizabethville, and reprinted in various papers on both sides of the Atlantic, kept many friends in touch with the Luanza Mission. He also issued a companion volume entitled "Back to the Long Grass." On his return he used the large sum he had collected in establishing schools in quite a number of districts around Luanza. Money was never a snare to Dan, if he got it freely he lavished it on the land he loved.

A few weeks before his Home-call he had the joy of realising one of the greatest ambitions of his life, by finishing his translation of the whole Bible into the native tongue, for the African Christian is no lover of portions or parts, his desire is for the whole Word of his Father God.

The years since his return have been filled up with consolidation, enlargement of area, a visit or two to the coast or railhead towns. Without any warning of failing health, the end had come unexpectedly. A simple injury to his hand, followed by blood poisoning and the startling message : "Dan Crawford died June 3, 1926. " Laid to rest beside others in the little sacred spot in Luanza. To know Dan Crawford was to love him, and those who knew him best can most truly say: "We loved thee well, but Jesus loved thee best—FAREWELL."

While everybody gives Crawford's year of birth as 1870, Pickering says 1869, and he is correct: Tuesday, Dec 8, 2020 : 04:01
Marty said ...
From “Echoes of Service” 1936
Fallen Asleep: April 13th, 1936 at Weston-super-Mare, GRACE, widow of Daniel CRAWFORD, of Luanza, aged 65. Our sister (née Miss Tilsley) was married to Mr. Daniel Crawford [on 14th October] 1896, and diligently shared his labours until his home-call in 1926. After that, she continued devotedly serving the Lord at Luanza until the end of 1932, when she returned in ill-health to England. Her health continued to fail, and of late, she has suffered intensely, so that we cannot but be thankful for her release. She leaves one son to mourn her loss. How many in Central Africa could rise up and call her, Blessed!
Wednesday, Apr 14, 2021 : 03:35