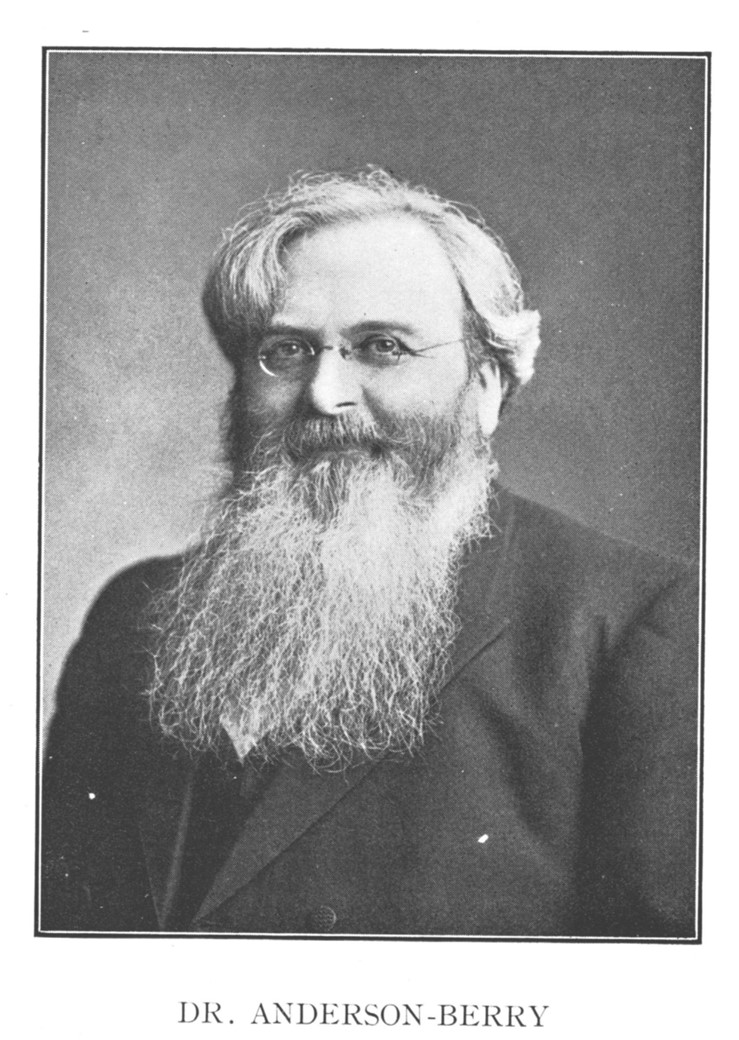 DAVID ANDERSON-BERRY, M.D., LL.D., F.R.S. (Edin.), was born in Wick in 1862. His father being a Presbyterian minister, he was brought up under good religious influence. The particular truth that led to his conversion was the imminent Return of the Lord Jesus Christ. He had heard of certain Christians to whom that blessed truth had become so real and precious that they had dispensed with all useless ornaments, such as bracelets, lockets, breast-pins, and to one so full of worldliness as he was, this devotion greatly impressed him. Further, to those people, the doctrine of the Lord's return afforded them joy, while to him it caused concern and sadness.

He had known the Gospel from his youngest day; he firmly believed that if he was to be saved he must, as a sinner, accept by faith the Lord Jesus Christ as his personal Saviour, but his hope was that, as there is generally some little warning before death, he would enjoy the world, and at the end of life's brief day make the great decision before passing hence. This truth of the Lord's Coming, however, upset all such theories. To think that at any moment the Lord would return to this earth, take His own people to Himself and leave the unconverted for judgment disturbed him greatly. Under the gracious influence of the Holy Spirit he yielded heart and will to the Saviour and gladly owned Him as his Lord and Master. Becoming a student of the Scriptures, he very soon learned the truth of the priesthood of all believers and the simple Scriptural principles of gathering. Having a great desire to work for His worthy Master, yet naturally diffident, it gave him considerable mental concern before he could speak to another about his soul or give away a Gospel tract.

"Not many mighty are called;" "to the poor the Gospel is preached," and when our Lord was here on earth it was the common people who heard Him gladly. It is the same to-day, for the Lord's people are generally found in the humbler walks of life. It took great courage on the part of Dr. Anderson-Berry to meet to worship with unlettered brethren and, indeed, to profit by the ministry of such, but our brother has testified that the happiest moments in life for him were spent in the humblest surroundings. He entered Glasgow University as a Law Student, but soon changed to Medicine, studying in Edinburgh underLord Kelvin and other professors. He obtained his degree when he was twenty-two. Prosecuting his studies, he entered the Sal-petriere Hospital, in Paris, took lessons on mental diseases under the celebrated Dr. Charcot, whom he valued as a friend through life; then spent some time among professors in Germany, further developing his knowledge and gaining experience. As a young man he travelled much, going round the world, and spending some time in U.S.A.

Qualified, and with great expectations, he commenced practice in London, where thirty years ago he was for some time in fellowship in Overstone Hall, Hammersmith. After this he acted as a sort of pastor in Copse Road Chapel (connected with George Muller), Clevedon, then he moved to Boscombe in 1897. There being no Scriptural meeting as he understood it, the doctor found a building in Drummond Road which had been built as a Reformed Church of England. The congregation had dwindled, so Dr. Anderson-Berry rented the building, and set up a Table where true Christians, as such, would be welcomed.

After some three years in Boscombe he moved to Redhill, then to St. Leonards, where he spent some years, and where a good part of his literary work was done. From there he moved to Highgate, London, in the year 1910, and practised as a consulting physician.

An able minister of the Word of God, with a manner all his own, which made him unique, his service at Conferences were sought after; and out of a busy life he gave considerable time to the study and ministry of the Scriptures. He helped acceptably in Cholmeley Hall for some years, and several times his helpful ministry has been enjoyed at the Half-Yearly Conferences in Glasgow.

A strong fundamentalist, he stood foursquare on the Word of God, and by lip and pen contended earnestly for the faith once for all delivered to the saints.

For years he contributed helpful articles to The Witness, a series of papers on "The Acts of the Apostles " and "Seven Cries from the Cross" were reprinted in book form.

Several books and pamphlets have come from his pen confuting error and defending the fundamentals of the faith. Two of these issues, namely, "After Death— What?" which clearly distinguishes between "spirit and   soul and body," and "Seventh Day Adventism," which is the standard exposure of that peculiar System, have had a considerable sale.

For several years Dr. Anderson-Berry was in declining health, and he entered into his rest on 5th June, 1926. All that was mortal of the beloved physician was laid to rest in the family burying ground, at Winchelsea, to await the great Gathering Shout which will waken the sleeping saints and change the living ones.

Elaine Deane said ...
Dr Anderson-Berry left the Hastings and St Leonards Natural History Society ( as it was then called) a legacy of £500 in April 1930. An obituary states that he practised opthamology at the St Leonards Railway Convalescent Home. I have been unable to establish if this is here in East Sussex or Hampshire. Are you able to help me, please.

In the Lancet (Dec. 15th, 1906, page 1702) a letter is listed as  from 'Dr David Anderson-Berry, St Leonards-on-Sea'. The Hampshire St Leonards (which is now in Dorset!) is far from the coastline, so I deduce that the Doctor was living in East Sussex, just West of Hastings. This would account for the legacy. Timothy Stunt

Post script:  He also wrote an introduction to E.T Connold's Gleanings from the fields of nature (1910) which is based on notes made during 'rambles along the shore, and through the woods and by-paths of rural districts around Hastings and St. Leonards-On-Sea;'    Timothy Stunt