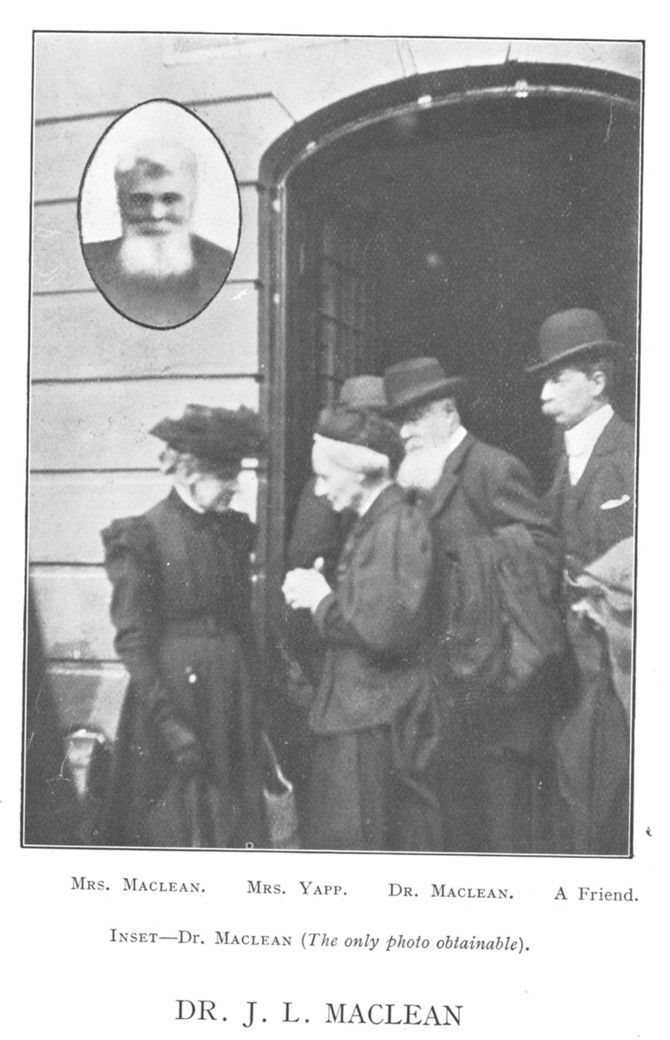 JOHN LINDSAY MACLEAN, of Bath, was born on 23rd October, 1830, at Nassau, the capital of the Bahama Islands, where his father, an officer in the Commissariat Department, was serving. When John Lindsay was about four years of age his father was ordered to Sierra Leone, and had to go there alone, as that Settlement in those days bore the ill-omened, but well-merited name of "the white man's grave." So mother and family (two sons and a daughter) were sent to Dysart, in Fifeshire, the father's birthplace and family residence. After five years' continuous service in Sierra Leone, promotion and a year's furlough were granted to the father, whose next station was at Hobart, Tasmania, at that time Great Britain's convict settlement. After the Crimean War, Commissary-General Maclean was made a K.C.B., and of course was known as General Sir George Maclean. The father died in 1861, the mother (Lady Sarah Maclean) died in 1889.

As it was settled that John Lindsay was to follow his elder brother's example, and enter the Army, he was sent home to the Royal Military College, Sandhurst. The course of study required from three to four years. He obtained his commission after three years, and on leaving the College carried off the "General Merit" prize, the highest distinction open to a cadet. He was posted to the 69th Regiment, now designated the 2nd Battalion of the Welsh Regiment, and with it served abroad, first at Malta and then in the West Indies. Entering with characteristic keenness into his profession, his zeal was quickly rewarded by his being made Adjutant of his regiment at an unusual age, and after an unusually short period of service. In the matter, too, of promotion he had been fortunate, obtaining by purchase his Captaincy in his regiment.

At Malta the Colonel of his regiment was interested in him, and took him to a Bible-reading in a private house. Struck with the evident earnestness with which those assembled dealt with the Holy Scriptures, searching them as those who believed them to be the very words of God, he continued going, and was led to a personal knowledge of the Lord Jesus Christ.

While serving in Barbados he had yellow fever, followed by a relapse when recovering. Several of his companions were carried off, and his life so hung in the balance that the army chaplain went to his bedside, read Hebrews 13, and left without another word. His fine constitution stood him in good stead, and his life, by God's providence, was spared.

One day in a railway carriage in England he was bearing witness for his Master, when a lady said she could not understand how one who sought to spread the Gospel of peace could carry a sword. This caused him to consider his position, with the result that it ended in his conviction that the life of a soldier was incompatible with that of a professing Christian; and, acting on this belief, he sold his Captain's commission and quitted the Army. He took his medical diploma at Edinburgh in 1861, married in 1863, and in June of that year went to reside at Leominster, where Mr. and Mrs. Yapp were living.

This special work of helping missionaries was begun at Leominster in fellowship with William Yapp. The earliest notes of Gospel work in Italy were from the pen of Count Guicciardini. The first sheet that has been preserved is dated 1860. The earliest in which Mr. Yapp's name was linked with the Count's is 1863. The first which bears the name "William Yapp and J. L. Maclean" is 1866, and from 1867 onward Signor Rossetti was a frequent correspondent.

In the latter part of 1874 Mr. Yapp was called to rest, and in 1875 the sheet, The Gospel in Italy, was signed by "J. L. M'Lean" alone, but the signature follows the statement: "My friends, Mr. H. Groves, of Kendal, and Mr. H. Dyer, of Exeter, I may mention, will be glad to join me in receiving offerings." The last paper mentioned was issued from 10 Widcombe Crescent, Bath. J. M. Code had recently been called from Bath to be "with Christ," and, partly to render help in the meetings, and partly for the sake of the education of their only child (a youth of great promise who died in 1876, aged 12), Dr. and Mrs. Maclean had removed to that city.

In the year 1871, when in Glasgow, Henry Groves, of Kendal, and William Bowden, of India, called on Thomas M'Laren to consult about starting a missionary paper, referring to The Missionary Reporter, a 3d. quarterly then defunct. A 1/2d. monthly was suggested, and The Missionary Echo was begun in 1872, the names attached to it being H. Groves and J. L. Maclean, while the fellowship of H. Dyer continued, as it did to the close of his service on earth.

In 1885 The Missionary Echo gave place to the present larger paper, Echoes of Service, which was again enlarged in 1891. God was pleased to use this paper to stir up interest in mission work. Many were moved by reading its pages to give themselves to the work, and still many more were stirred to fellowship in helping it forward by their gifts, until at the present time there are about 1000 workers in many parts of the five continents. In addition to Echoes of Service, he and Henry Groves edited The Golden Lamp until 1889, when, on account of Mr. Groves' failing health, it was undertaken by W. H. Bennet and edited by him till discontinued in. 1890.

Towards the end of 1890 W. H. Bennet, of Yeovil, became more definitely linked with Dr. Maclean in service. In 1891 Henry Groves was taken home. In 1894 R. E. Sparks, B. A., of Belfast, resigned his position as solicitor to the Ulster Bank that he might assist in the furtherance of the work.

The well-known Leominster Conferences were begun by William Yapp, with the assistance of Dr. Maclean, in 1874, and though Mr. Yapp was called to rest towards the end of that year, they were continued for years.

Many speak of consecration. Dr. Maclean exemplified it. He yielded himself and all he possessed to the Lord and His service. We often hear of a "self-denial week;" he had days of self-denial in the year, and an extra one in leap year.

Dr. Maclean's knowledge of things in general was very extensive; his memory was remarkable; his letters, which were full of wholesome counsel, were greatly valued by those who received them. He never was a fluent speaker, yet his words were always weighty. Whatever he did must be done thoroughly. He had his judgment about most things, which was not easily affected, and a persistency in carrying out what he began which seldom failed. One special train of his character was genuine humility.

The Bible was Dr. Maclean's constant companion; and his marks and notes, especially in earlier years, show how truly he studied the Scriptures. He had a deep sense of the need and the value of prayer, which he often expressed. In his ministry he dwelt much on the example of the Lord Jesus, but no one could hold more tenaciously that only those who know the forgiveness of sins through His blood (Eph. 1. 7) can rightly consider and in any measure follow the example of His most holy life. He accepted the Bible fully and completely as the Word of God. No reasonings of Higher Critics troubled him.

The malady—Bright's disease—which at last proved fatal, began to make itself seriously felt early in 1906, when he went to Yeovil, then to Leominster—the residence of his sister-in-law, Mrs. Yapp—for the sake of rest and change. Any hopes of benefit by this movement were soon dissipated, and, after spending the summer months there, a return was made to Bath.

On October 19 he spoke an affectionate word to his wife, as if he knew that he was going, and soon after one o'clock he peacefully fell asleep, within a few days of his 76th birthday. Those who knew him best would testify most that he was "a good and faithful servant."

This account of Dr Maclean (in the 2nd edition of Chief  Men)  is a significantly abbreviated version of the piece in the 1st edition, which for example, includes the year of his marriage and the name of his wife, Harriet Warren, who was a sister of Mrs William Yapp.  I wonder why HyP expunged that bit of information!  Timothy Stunt