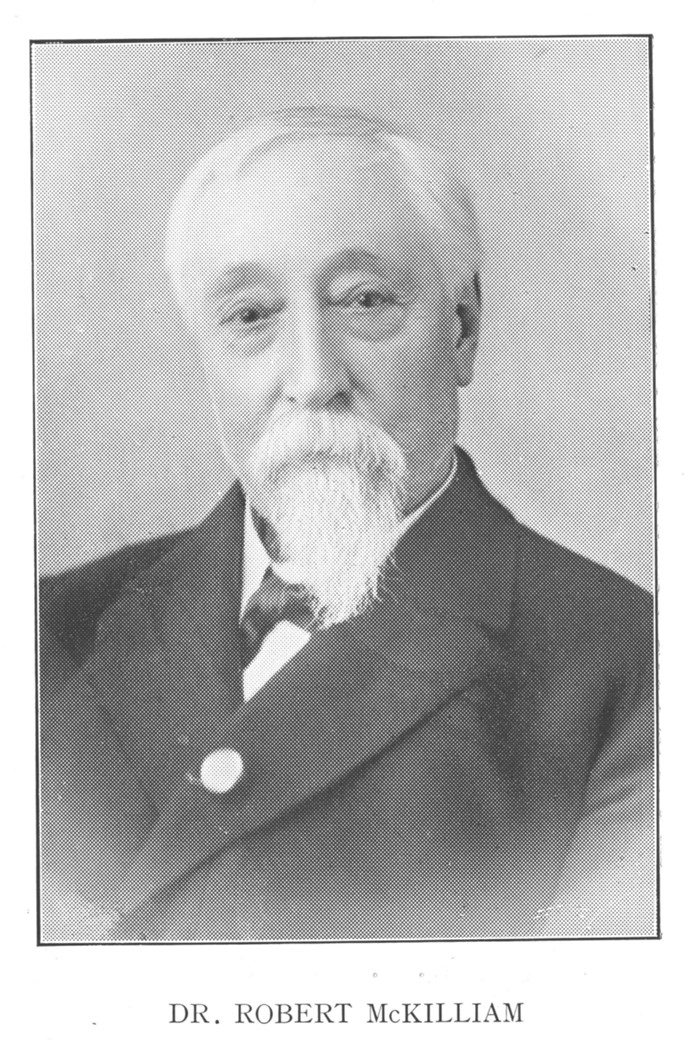 ROBERT M'KILLIAM, son of Basil M'Killiam, was born at Aberdeen in 1837. His mother's godly life and prayers had great influence over him, and he was convertedat an early age. He studied for a doctor, and passed examinations at too early an age to engage in practice, taking, however, his M.D. degree at Aberdeen University at the age of 21, and subsequently his CM. degree at the same University. He practised as physician and surgeon at Old Meldrum, Forgue, and Huntly, leaving the last named in 1880.

The doctor engaged in active Christian work when quite a young man, and because of his outstanding Christian principles was made an elder of the Free Church of Scotland at a comparatively early age for such an office. His Biblical teaching, particularly that connected with the Second Coming of Christ, was, however, too pronounced for the Free Church, and owing to much persecution and opposition he left that body. Several left with him, and an undenominational Christian work was then commenced at Huntly, greatly blessed and owned of God in the conversion of many and in blessing to God's people.

Dr. M'Killiam longed for London as a sphere of labour, and in 1880 the way was made clear, so he succeeded to the practice of the late Dr. Tate, of Blackheath. In a short time an Assembly of believers was formed at Blackheath. The Alexandra Hall was taken, and up to the time of his last illness the doctor continued to preach the Gospel and minister the Word there, and very many will have cause to thank God for his faithful ministry. His activities were not confined to Blackheath, as he travelled much all over the country and laboured for the Lord most assiduously. He was Editor of The Morning Star from its commencement in January, 1894, and continued so till the time of his death—thus covering just over 21 years. Through this paper, which was "a herald of the Coming of the Lord Jesus Christ, " his name was known and his teaching appreciated and blessed in many parts of the world.

The doctor's favourite theme was the Personal and Premillennial Coming of the Lord Jesus. With his dying hand he penned these words for the readers of The. Witness: "The 'Blessed Hope' cannot much longer be deferred. The full choir shall soon fill the heavens with music that even the Archangels shall delight to hear; and you and I, my brother, my sister, saved by His grace, however unworthy, shall add our little strain to the full acknowledgment of His worth. Mine shall still be: 'I'm only a sinner saved by Grace.' "

After two serious operations, which meant many months of intense suffering, the beloved physician was called to a well-earned Rest in the Heavenly Home on 7th February, 1915, at the advanced age of 78.

Basil McKilliam was a confectioner / baker in Aberdeen.
Robert was named after his grandfather.

Can give you more information on the family if required.
Monday, Apr 16, 2018 : 06:25
Tom said ...
Thanks Joyce, yes would be grateful for anything else you have? He is of particular interest to me because of the local connections (ie. Blackheath where he lived).
Tuesday, Apr 24, 2018 : 19:09
Timothy Stunt said ...
From the census records it appears that his wife Helen (of the same age as himself) was also from Aberdeen and all of their six children were born in Scotland before he moved to London. Timothy Stunt
Saturday, Mar 23, 2019 : 22:52
Marty said ...

Fallen Asleep: Feb. 7th, [1915] of our aged and highly esteemed brother ROBERT M'KILLIAM, M.D., Mar. Coll., Aberdeen. For some time, he had been in failing health, and he had undergone more than one severe operation. He will be missed by a large circle of friends and those whom through long years he had edified with his ministry. Dr. M'Killiam came many years ago from the North of Scotland to Blackheath, where he bought a practice, and while pursuing this, also gave himself to energetic gospel work. Soon the Alexandra Hall was secured for meetings, which have gone on ever since. His ministry was greatly valued, and he was invited widely to conferences. During late years, he moved among assemblies, holding special meetings. The subject of the Lord's Coming was always dear to him, forming a large portion of his teaching, and he was well known as the Editor of The Morning Star, a periodical devoted to the spread of this glorious and important truth. The burial took place at Lee Cemetery, Hither Green, on the 12th, and was largely attended, all his children and grandchildren being present. "Echoes of Service" 1915
https://www.findagrave.com/memorial/183701635/robert-mckilliam

In which country do you live? This is one of the volumes I'm missing.