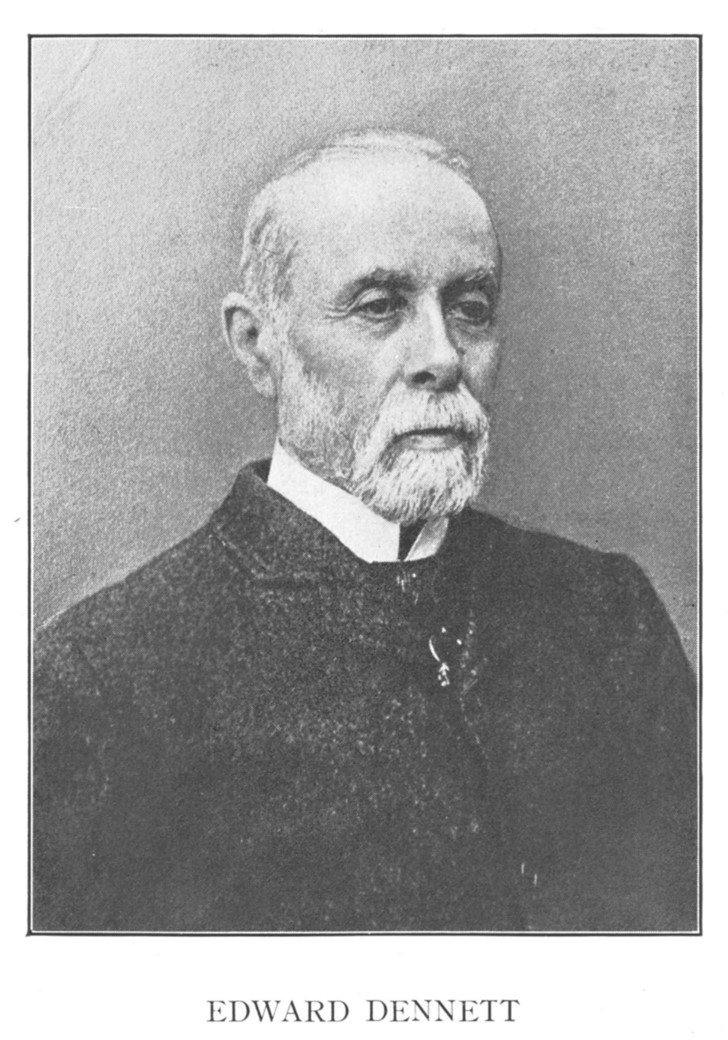 EDWARD DENNETT was born in the Isle of Wight, 1831, at Bembridge, and died in Croydon in Oct.,1914 after a short illness. His people were all in the Church of England, but he was converted as a lad through the instrumentality of a godly clergyman, and he left the church from conviction and became minister of a Baptist Chapel in Greenwich, having previously matriculated at London University.

In 1873 he contracted a severe illness through visiting one of his parishioners, and was sent abroad for a year by his people. He wintered at Veytaux, and coming in contact with "brethren " staying at the same "pension, " he had a good deal of intercourse with them, which helped to clear in his mind certain difficulties that he had.

Taking no steps till his return, he explained his views and resigned his charge. Shortly after "breaking bread" for the first time with those gathered simply at the Lord's table "unto His Name."

Mr. Dennett had the pen of a ready writer. His sphere of labour was England, Ireland, and Scotland, and he paid visits to Norway, Sweden, and America. He had pastoral and teaching gifts of a high order.

Brent said ...
I’m greatly enjoying meditating upon the Lord Jesus Christ in Mr. Dennett’s book titled, “The Name Above Every Name”.
Wednesday, Aug 14, 2019 : 11:27
David said ...
A very nice summary, no helpful today, when I mentioned brother Dennett’s name in our reading. By the way, Brent, I am currently in the process of recording The Name Above Every Name as an audiobook. I hope to have it completed by the end of this week. If Brethren Archive wants a link to it for posting here, please drop a note to me, and I will be happy to give it. I have already posted a number of other books, including the New Testament of the JN Darby Bible.
Monday, Nov 2, 2020 : 06:53
Colby S said ...
Hi David - out of curiosity, is it your recordings which are linked on the Present Truth Publishers site? If so I would like to thank you for the beautiful recordings of the JND Bible. Do you believe the OT will ever be done?
Monday, Jan 18, 2021 : 09:28