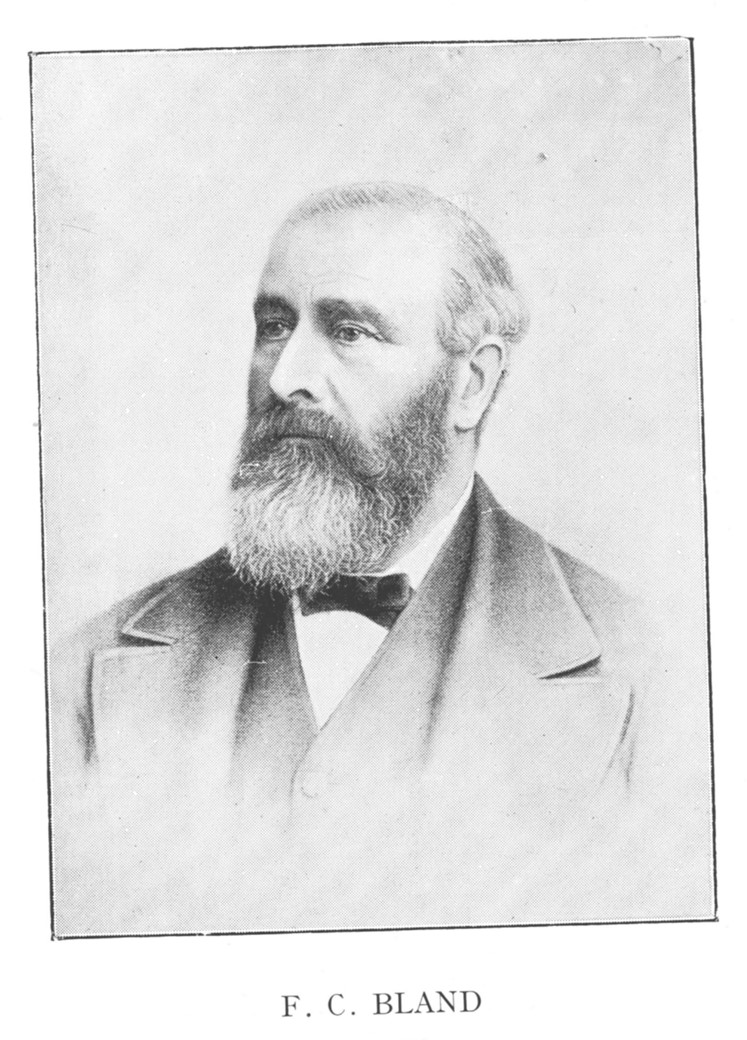 F. C. BLAND was born in 1826, at Derriquin, upon the Kenmare River, County Kerry, where his family had been settled for generations. His early life was spent in Ireland, and in due course he entered Trinity College, and received his degree in Arts from the University of Dublin. At the comparatively early age of twenty-three he married the lady who was in no mere conventional sense his companion and friend and fellow-helper through all the vicissitudes of five-and-forty years. On his marriage, Mr. Bland settled at Derriquin, devoting himself in part to the management of the estate, which, under his care, emerged from the barbarism in which many parts of Ireland were sunk at the time of the potato famine, and in part to the amusements and hospitalities of an Irish country gentleman in a county as noted then for its social pleasures as it is famous at all times for its extraordinary natural beauties. A man of commanding presence and charming address, Mr. Bland was a special favourite with his fellows, and among the tenantry his word was law. Throughout the estate, indeed, his rule was a "benevolent despotism." In 1859 he served the office of High Sheriff for Kerry, and at the time of the revival in the south of Ireland he held a prominent position among the gentry of the county.

Dromore Castle (where lived the well-known Christian gentleman, Mr. R. J. Mahony) and Derriquin were neighbouring estates. F. C. Bland and R. J. Mahony had known each other from infancy, and their mutual affection was like the love of brothers. Early in the year 1861 some earnest words spoken by Mr. Mahony at a gathering of parochial school children at Dromore Castle made a such deep impression on  some of the adults present that meetings for prayer followed. One and another became deeply anxious about eternal things, and soon an increasing company of the peasantry were rejoicing in new-found blessing. The Ulster revival of 1859, and the Dublin awakening of I860, had failed to make any sensible impression upon the people of the south. But God was about to work among them in His own way. A friend from a Midland county, hearing of the work, paid a visit to Dromore, bringing with him C. H. Mackintosh, whose ministry by word and pen has helped so very many. A meeting was arranged, and the closing passage to the 2nd chapter of the Epistle to Titus was his subject. Among the number who attended were Mr. and Mrs. Bland, and both of them were brought to Christ by the Word.

In those bright days of the early revival there was a striking freshness and power about the testimony. As in apostolic times, the convert not infrequently became a witness and a minister at once, seemingly as the natural outcome of the blessing received. Boon companions and bosom friends in recreations of their boyhood, and in the pleasures and pursuits of their early manhood, Bland and Mahony now became united in preaching Christ to their friends and neighbours. The blessing spread among the gentry, and at the summer assizes at Tralee eight members of the grand jury took part in public meetings for the preaching of the Gospel. And the fruit of that work still lives. Many Christian homes there are in Munster where "the Kerry revival" is reckoned as the epoch of their spiritual blessing.

Towards the close of that year Mr. and Mrs. Bland visited London, intending to return for the coming-of-age festivities of the eldest son of one of the principal noblemen of the county. But God has lessons to teach them, and work for them to do. Mrs. Bland fell seriously ill, and a prolonged sojourn in the south of England became a necessity. Settling in Plymouth, Mr. Bland at once set himself to seek opportunities for evangelistic work. He invited T. Shuldnam Henry to join him in this effort, and during the winter a series of crowded meetings, held in the Mechanics' Institute, resulted in blessing to untold numbers of the hearers. At this time Mr. Bland was brought into contact with some of the most honoured and eminent of the leaders of the old revival. From them he learned the secret of Bible study, and by their ministry he was grounded and established in the faith. When, therefore, Mrs. Bland's recovery enabled him to return to his home in Ireland, he was already a mature and steadfast Christian, deeply taught in the Scriptures.

Many who will read these words will be ready to speak of help received from him, and vastly greater is the number of those who, though perchance they never even heard his name, have profited indirectly by his ministry, some of his addresses being preserved in "Twenty-one Prophetic Papers" and smaller booklets. During D. L. Moody's well-remembered meetings at the Opera House in London, scarcely a day passed that he did not spend an hour with F. C. Bland over the Bible. "Mighty in the Scriptures" might well be written in his epitaph. Not that he himself would have tolerated the suggestion. In a conversation with a worker many years ago, he indicated what he would wish to have recorded on his grave. "Just my name," he said, "and this one word, 'obtained mercy' (1 Peter 2. 10). It is but one word in the original," he went on to say. "What a pity it is we can't render it simply 'mercied.'"

Mr. Bland was a singularly interesting personality. Naturally haughty, intolerant of opposition, and quick to resent an injury or a slight, grace so changed him that not a few who think they knew him thoroughly would describe him as one of the gentlest and humblest of men. Though intensely practical, impatient of mere hair-splitting, and intolerant of new-fangled doctrines, no examination of Scripture seemed too minute.

The manner of his communicating the truth to others was thoroughly characteristic of the man. There was neither effort nor artifice in any address he ever gave. If addressing a thousand people he spoke in the same natural, unaffected manner as when talking with a friend at his own fireside. There was nothing whatever of oratory about his speaking; nor of eloquence either, save that sort of eloquence which is never wanting when in apt and simple words a man gives out what he believes and feels. Pathos there was certainly, and it added a special charm to his words. And above all there was an intense reverence about him. He had great thoughts as to what was due to God. Possessed with a keen sense of humour, and a mind as playful as a child's, anything of levity in Divine things was utterly repugnant to him. And yet there was no austerity about him to repel, nor a trace of asceticism. All his dealings with God were in the spirit of a man who loved and trusted Him implicitly, and who knew he was beloved.

And he loved His people too. Unswerving in his devotion to truth, and keenly alive to the importance of the minutest detail of Christian doctrine, his heart was with all who loved God, however widely they might be separated from him ecclesiastically. The testimony of his life might have found expression in the words of the 119th Psalm: "I am a companion of all them that fear Thee, and that keep Thy precepts."

Mr. Bland's last illness seized him at Weston-super-Mare, where he had spent the winter. From there he was removed to South Kensington, the residence of his son, Dr. Bland, under whose care he remained until he "entered into rest" upon 5th April, 1894. His strength failed so rapidly that even the visit of a friend was generally more than he was able for. But the word of Christ "dwelt in him richly," and with the full consciousness that he was dying, the calm confidence of faith never forsook him. He was'a man greatly beloved.