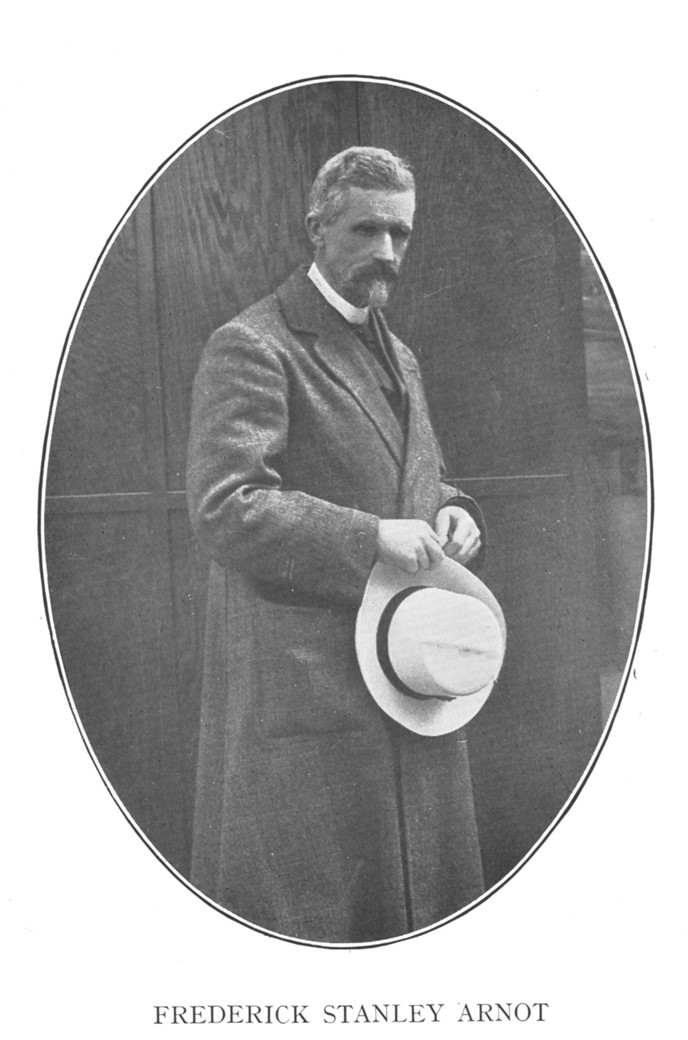 IN the year 1864, in the town of Hamilton, there was a prize distribution at a school. The gentleman who was giving the prizes away was the intrepid Pioneer-missionary-explorer, Dr. DAVID LIVINGSTONE, then on what proved to be his last visit to his own country. He related many of his adventures in Africa to the boys, telling them, too, something about the terrible cruelty of the slave trade, and in burning words describing some of Africa's needs.

Among his hearers was a little boy, FREDERICK STANLEY ARNOT by name, whose mother had brought him to hear the great traveller and preacher of the Gospel. Fred was born in Glasgow, on Sept. 12th, 1858, but the family soon removed to Hamilton. He was only six years old at the time, but he listened to the address, and from thence forward Africa drew him like a magnet. Friendship with the Livingstones, who also lived in Hamilton, deepened his interest. Boy-like, he determined that he must go out to help his hero, a resolution which coloured all his studies and thoughts, and set his feet in a direction from which they never diverged.

Arnot's parents were Christians; he himself was converted when 10 years old. It came about in this way. One day he and a companion, Jimmie, were appropriating and eating plums from a neighbour's garden, and Jimmie's older brother, from a window, called them thieves. Fred Arnot felt as though a pistol had gone off at his very head. "Thief! Thief!" rang in his ears all the time. Next day he had to pass Hamilton prison, and did so in a state of terror, fearing he might be taken off to prison. To his horror he saw a policeman leading a little boy to the very place, and in his other hand the policeman held a pair of new boots which the barefooted little boy had stolen. Fred felt that he was much more wicked than that little needy boy. He rushed off home and hid himself till bedtime. He said: "I dreaded to pass another night; I could not tell anyone what a wicked boy I was. I knew I ought to tell God about it, but I trembled to do so at my usual evening prayer, so I waited until all were in bed and the house quiet, then up I got. Now, I thought, I will ask God to forgive me, but words would not come, and, at last, I burst into a flood of tears. I felt I was too wicked even for God to forgive; yet a glimmer of light and hope came to me with this thought: 'That is why Jesus died on the Cross for me, because I am so wicked.' Among many texts of Scripture that my parents had taught me was John 3. 16. I repeated it to myself on my knees about two o'clock one morning, and that 'whosoever' took me in. I awoke next day with a light heart, the burden was gone."

His desire to help Africa increased tenfold. He realised, as never before, what her need was, and now he really had something which he could offer her—God's great salvation (the only foundation of real good to this perishing world). As the years went by his purpose deepened. At 15 he felt that God had called him to a missionary life, and therefore, with God-given wisdom he set to work from that time to learn and practise anything which would be of service in far Africa—joinery, blacksmith's work, watch repairs, all came in for his attention; he also accustomed himself to find his way in lonely and unfamiliar districts with the aid of the compass only; and preached frequently in the open air with his father, as well as helping in village work.

In 1881, on July 19th, at the age of 23, his cherished hope was realised. He sailed for Africa on the "Dublin Castle, " accompanied by Donald M'Lean, who intended to go into the interior with him. At Durban, where they arrived on Aug. 20th, this friend was taken ill, and being told by the doctor that he was not fit for such a journey, he remained in Natal, and Arnot, when his preparations were completed, proceeded alone.

At that time the railway reached only as far as Pietermaritzburg; the rest of the journey had to be made by oxwagon. The difficulties, dangers, sickness, and privations which Arnot endured, served only to strengthen his faith in God. He realised, as he tells us in his diary, that God's promises were not mere words, written for the instruction of our minds, or for repetition with our lips, but certainties to go by; and the assurance of one of these is better than an army.

On the 19th of November he left Maritzburg for the interior. Progress was slow at first, on account of the long continued drought, but when rain fell they were able to cross the desert country beyond the Limpopo River, arriving at Shoshong, the Bamangwato capital, on March 11th, where King Khama, the Christian ruler, received him very kindly. He remained there three months. Then as he wished to visit the Barotse, King Khama offered his Christian headman, Tinka, as escort as far as the Mababi River, a charge which the good black guide performed most thoroughly. On December 19th, 1882, after tedious negotiations with various headmen and King Liwanika, conducted by a kind trader, he reached Lealui, the principal Barotse town. Arnot spent about eighteen months in that part, making occasional brief voyages up the Zambezi, and teaching some of the children. In July, 1883, he went down to Panda-ma-tenka to hear if someone was going to join him in his work, and also to procure supplies, and during this interval he made visits to several outlying places, returning to Lealui by Oct. 22nd, when he received a very hearty welcome and a present of a nice, snug hut in the town, from Liwanika himself.

Liwanika, who had many talks with Arnot, had been very urgent at first that he should not teach his people the Word of God, and especially such a thing as that a poor slave might be seated in the palace of God, and a king or chief shut out. Arnot begged the king not to be angry with him, for the words were God's words, not man's. As time went on, and especially after Arnot's return from Panda-matenka, Liwanika became quieter and gave permission to the missionary to preach more freely—and indeed, what else could such a missionary do than proclaim the whole counsel of God?

Often he used to hear the natives talking among themselves about the things he had told them. "Monare's words pierce the heart," one man said, and the poor slaves found it hard to believe that the Heavenly postion could be theirs too. Many times some of the people would come to him after several days, to discuss questions weighing on their minds in respect of his solemn words.

In 1884, as civil war was threatening, Arnot was advised to leave Lealui, and so, on May 1st, in company with a friendly Portuguese trader, Senhor Porto, he started for Benguella, on the West Coast. After various hindrances and adventures, he arrived there in November, 1884, having thus travelled clear across Africa, from Durban on the East coast, to Benguella on the West.

In June of 1885, after collecting stores and carriers, he started for Garenganze (now called Katanga), a journey of 1200 miles, the country ruled by Msidi, who was anxious to have white traders there. Arnot, on the strength of that wish, and having something better to offer than trading goods, accepted the invitation for himself, and reached Msidi's on Feb. 14th, 1886.

He frankly showed the king, when breakfasting with him, that he had to speak some very terrible and unpalatable truths, as well as proclaiming God's love in sending His Son to die for fallen man. He feared if he did not fairly warn the king of his intentions that Msidi would think that he had intentionally deceived him.

After a residence of more than two years in Garenganze, during which time he had much encouragement, Arnot returned to England—his first visit in seven years. Whilst there, he married Miss Harriet Jane Fisher, who returned to Africa with him in March, 1889.

Between 1889 and 1908 he made several voyages to England, partly on account of ill health, which often compelled him to remain some years in his native land. He also established the long line of mission stations between Benguella and Garenganze, during this period.

In 1908 he settled in Johannesburg with his family, using that town as a base for his many operations in the interior. He and Mrs. Arnot paid a visit to Liwanika. Here, too, Arnot saw Dick, his native servant, who had been baptised on confessing his faith in the Lord Jesus, Feb. 13th, 1887, nearly 30 years earlier.

For six years Arnot continued his work, though often suffering severe bouts of illness, but in May, 1914, his busy life on earth, in which he spent 33 years in or for Africa, traversed 30,000 miles of its trodden and untrodden paths, came to an end, at the age of 55. Not a long life, but how full of labour for the Saviour whom he so early learnt to love.

Mrs. Harriet Jane ARNOT passed to be with the Lord from East London, South Africa, on Jan. 11, 1952. Converted in early life, Mrs. Arnot went to the Garaganze District, Belgian Congo, over 63 years ago with her husband and missionary pioneer F. S. Arnot. An invalid for a number of years, our worthy sister was in her 88th year when she was called home, and was buried in the same grave as her husband, who died on May 15, 1914. Saw all her family of 6 saved and serving the Lord.

Thursday, Jun 13, 2019 : 10:03
Malcolm said ...
One of my best friends in Gwelo Rhodesia was the grandson of F. S. A. His father being Arthur B Arnot who was our Baptist Church Minister.
I saw lantern slides of pictures taken whilst Frederick was on trek. They also had a carved staff which Msidi handed to F S A guaranteed him safety when he travelled back to the coast. All the Africans on route apparently recognised this staff and bowed down .
Understand this staff is now in a collection of an American University. (Anyone know which one??)
Sunday, Feb 7, 2021 : 05:33