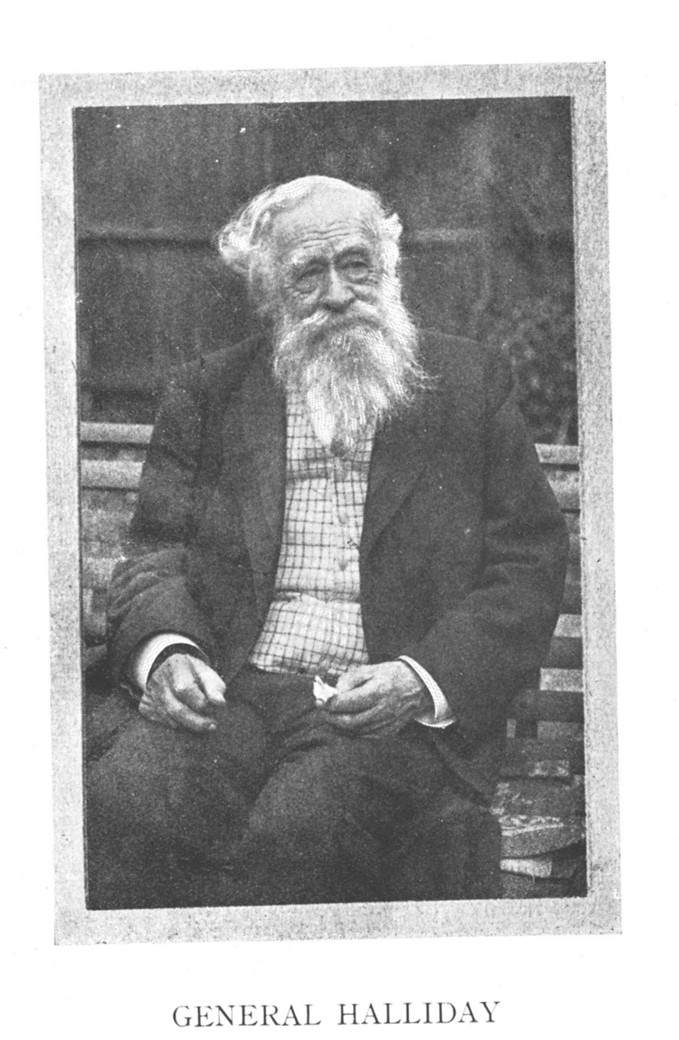 GENERAL HALLIDAY belonged to an old Dumfriesshire family. He was the son of Mr. Thomas Halliday, of Ewell, Surrey, and was born on the 9th May, 1822. His grandfather was Dr. Matthew Halliday, physician at the Imperial Court of St. Petersburg during the latter part of the reign of Catherine the Great.

He entered the military service of the Hon. East India Company as a cadet, and joined the 12th Madras Native Infantry at the age of sixteen. He served in various stations in the Madras Presidency until he was appointed to the Mysore Commission for the civil administration of Mysore. He was married in 1845 to his cousin, Miss Lucy Cotton, daughter of Mr. and Mrs. Cotton, of Petrograd, being then a decided Christian. He became acquainted at Cannonore with Samuel Hebich, Christian Missionary, well known to Anthony Norris Groves, then labouring at Chittoor, from whom he derived much spiritual help.

On becoming Lieut.-Colonel he reverted to military duty, commanding his old regiment in various stations in India and Burma, until he was promoted to Regimental Colonel in 1876, when he took up his residence in England, and lived for more than thirty years in Lee. He was promoted to the rank of full General in 1888, and was the Senior General of the Indian Army. He was an accomplished linguist, having a thorough knowledge of French, German, and Hindustani; was well acquainted with Hebrew and Greek in Bible study, and possessed an extensive knowledge of various subjects connected with science, art, and literature, and was also gifted in water colour drawing.

Yet with all this he was an earnest and faithful witness for the Lord Jesus Christ, exhibiting great humility of spirit, and ever ready to company with fellow-believers, regardless of social position, and was for very many years in fellowship with believers meeting at the Gospel Hall, Loampit Vale, Lewisham, by whom he was greatly beloved.

If there was one grace that shone out in his life more than another it was that of humility, and in this he was a faithful follower of Him who "humbled Himself. " On Lord's Day morning, 4th February, 1917, at his residence, Church Terrace, Lee, Kent, and in his 95th year, beloved General John S. Halliday departed to be with Christ.

The Newcastle Daily Journal reported his death on 8 Feb 1917, so Noel's 15 Feb cannot be correct ...

It's just the quote from Chief Men .. I have it above already :)

Yet with all this he was an earnest and faithful witness for the Lord Jesus Christ, exhibiting great humility of spirit, and ever ready to company with fellow-believers, regardless of social position, and was for very many years in fellowship with believers meeting at the Gospel Hall, Loampit Vale, Lewisham, by whom he was greatly beloved.

Feb. 4th, [1917] at Blackheath, General JOHN GUSTAVUS HALLIDAY, aged 94, long connected with the Indian army and for many years known to a very large number of the Lord's people. The General took a keen interest in the work of the mission field, and constantly rendered help at missionary and other conferences. "Echoes of Service" 1917

Monday, May 3, 2021 : 03:38
Anne said ...
Headstone at Hither Green reads as follows:In memory of Lucy, for 43 years the beloved wife of Lieut. Gen. Halliday, who fell asleep June 9th. 1888, aged 65. "Committed to the Lord's keeping till the day when the dead in Christ shall rise first". Also of the above Genl. John Gustavus Halliday, born May 9th. 1822, died at Lee February 4th. 1917. "Heirs together of the grace of life".
Memorial is south of the chapel that's still in use, currently about 6 memorials south of the southern wall, between McCracken double plot and the long low cross-topped stone of Frances Scott. Eastwards it's about in line with the door of the Taylor mausoleum that is just north of the disused chapel, counting 6 rows in from that direction.
Tuesday, Jan 25, 2022 : 01:18
Timothy Stunt said ...

The Oxford Dictionary of National Biography has an article on JGH's much older brother Sir Frederick James Halliday (1806-1901). JGH was the translator of the biography of Samuel Hebich which was written in German by Hermann Gundert and Hermann Mögling. For JGH's son-in-law, Sir Charles Scott (1848-1919), and the Brethren military connection with Lewisham and Woolwich see my 'Brethren and the Armed Services' in The Elusive Quest of the Spiritual Malcontent (pp.233-4).  Timothy Stunt