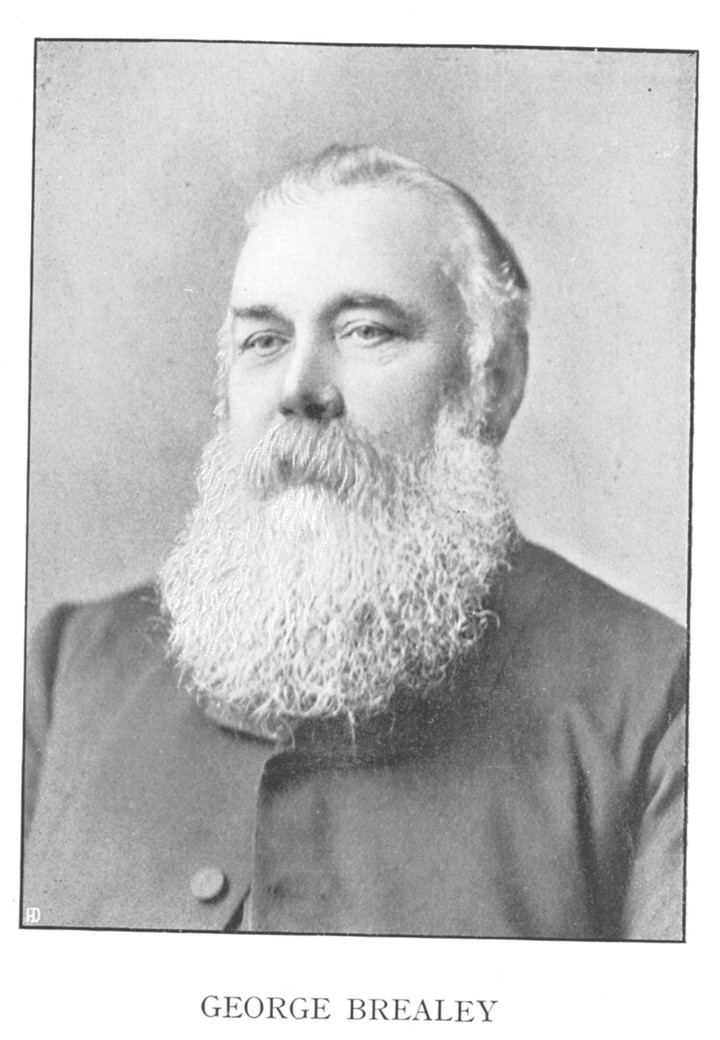 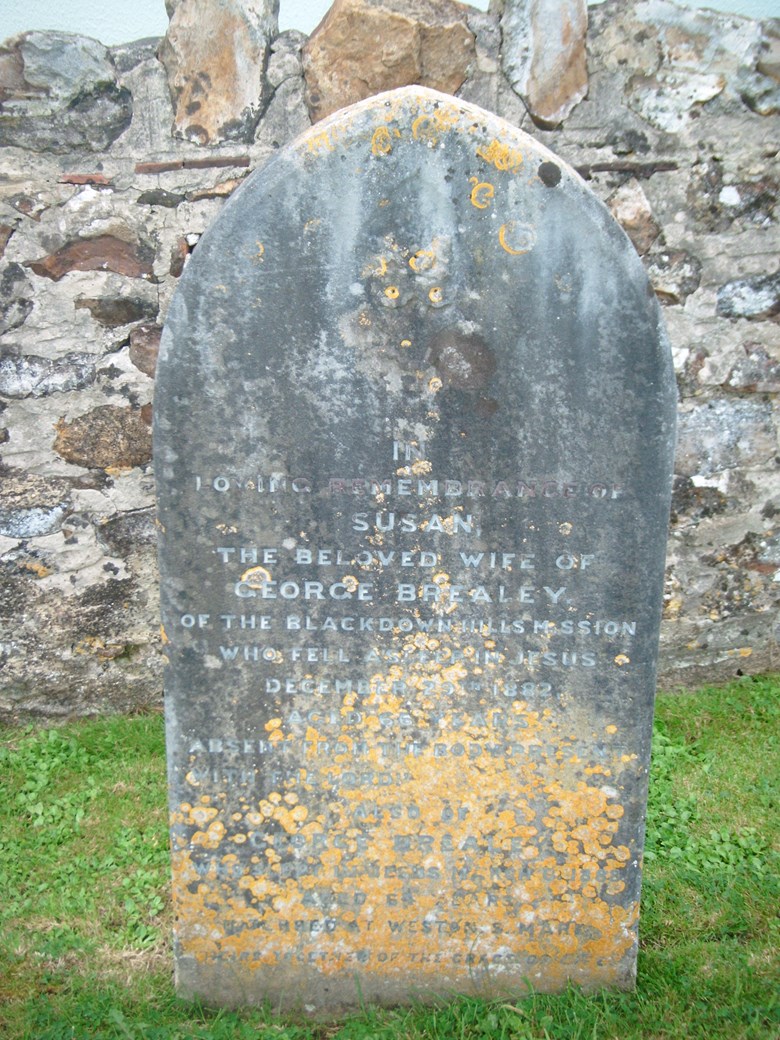 GEORGE BREALEY was a capital tract writer, and the "Blackdown Tracts" have been scattered far and near, and God has used them in the conversion of many souls. He was best and most widely known in the south and west of England as a willing-hearted, warm-hearted, whole-hearted evangelist, whom God had greatly owned in soul-winning.

He was born of poor but respectable parents at North Tawton, Devonshire, on 4th September, 1823. The family had many hardships, and, strange to say, though his parents were decided Christians, he was apprenticed at the age of fifteen to an infidel uncle, who, in addition to being a country shoemaker, kept a public house. Here he learned to drink, swear, and fight, but becoming seriously ill, he was obliged to return home.

At three o'clock on Whit Sunday, 1841, his mother found him in a public-house playing cards with two other young men. A short time previously they had taunted him with being a "Methodist." He had set to and thrashed both of them, and then took them to the public-house to prove he was no "Methodist." His poor mother finding him in such a place at such a time, fell on her knees and pleaded with God for her erring boy. He was completely overpowered by his mother's prayers and entreaties, and, turning to his companions, said, "Good-bye, mates, I shall never enter this place again, as I have done. " "What, " they replied, "you going to turn 'Methody.' He's afraid of his mother." This taunt annoyed him, but he was enabled to control his feelings, and quietly replied, "I am not afraid of my mother. You know I love her too well; but I am afraid of God and of my sins. Will either of you go to Hell for me ?" "No, " they replied, "we don't want to go for ourselves, much less for you. " "Then," said he, "don't laugh at me for turning round and trying to escape." He left with his mother, and soon after obtained peace with God.

At the age of twenty-one he married and commenced business on his own account in the city of Exeter in 1861. For some years he made little, if any, progress in the Divine life.

The Lord aroused him from his spiritual slumber partly through a conversation he had with a devoted Christian in a railway carriage, and partly through the suicide of "Old Evans," a godless man known to Brealey, who lived near him, but to whom he had never spoken on eternal matters. As he cut down the lifeless body, "the terrible thought of his accountability to God and his responsibility to his fellowmen pressed so crushingly upon him, that there and then he resolved to give himself afresh to God and His service with a determination never relinquished or relaxed. " From that day forward there was a mighty change in his life, which manifested itself to all, for he became an "out-and-out" Christian. He recognised that he was no longer his own in any sense, and was willing to be anything or do anything for Christ.

Referring to this "second conversion," or restoration to God, he wrote as follows: "His love had killed my earthly desires, and I was ready to be His slave because He had made me His free man." Night and day he prayed that he might be used of the Lord in His honourable and blessed service. The trammels of shame and worldly policy having been broken, he launched out into the deep, and let down his net for a draught of souls. And God greatly blessed him. He allowed himself only five hours for sleep; and in this way, whilst attending to his earthly calling, he succeeded in devoting several hours daily to visiting from house to house, and speaking personally to the people about their spiritual condition.

Through valuable help afforded him by various Christians, he was enabled to distribute tens of thousands of Gospel tracts at fairs and races. Tract distribution on such occasions was not then common, and he experienced much opposition. Undaunted, he persevered in carrying the Gospel into the head-quarters of the enemy. With banner, and striking texts inscribed on it, he moved from place to place, warning the unsaved to flee from the wrath to come, and pointing them to Christ, the sinner's refuge. "Instant in season, out of season, " he preached in the streets and lanes of Exeter. He also visited the low public-houses, speaking tenderly yet faithfully to the poor slaves of drink, and distributing Gospel papers and booklets. Eventually he became exercised about devoting his entire time to Gospel work.

After much prayer he decided to go to Demerara to preach to the negroes. Berths were taken in a sailing vessel. But the Lord had work for him nearer home. A "Macedonian" cry came from the Blackdown Hills in East Devon, and in 1864 he moved there. The "Hills" have an area of 400 square miles, and here and there are farms, hamlets, and villages scattered far apart. The moral and spiritual condition of the people at that time was wretched in the extreme. At first he had a salary which was given by various Christian friends. But as God began to work he became troubled about his position. Numbers professed to accept Christ as their Saviour. As the young believers searched the Scriptures, they saw that in apostolic times, when men and women believed on Christ, they were baptised, and gathered together on the first day of the week to break bread. They desired to obey the Lord and act out what they had learned. Some who contributed toward the evangelist's support became alarmed, and threatened to withdraw their help if he baptised the converts. What was he to do? "If I teach them absolute submission to the authority of the Scripture, must I hinder them in their desire to obey the Word of the Lord? Am I not responsible to help them to obedience?" Such were the questions that George Brealey had to face, and he decided to obey God rather than man, and carry out His instructions: "Teaching them to observe all things whatsoever I have commanded." Thus he gave up his salary and trusted the Lord alone to supply all his needs, and he never regretted taking this step.

The cottage in which the meetings were held became too small. It was subsequently enlarged, and in the course of two years 140 were baptised and received into fellowship. The work increased, and other parts of the "Blackdowns" were visited with similar results. Schools and Gospels halls were built, and men and women, as well as boys and girls, have not only been taught to read and write, but many have been saved and led on in the ways of Christ, some of whom are labouring for the Lord in China, India, Africa, and America, while others are witnessing for Christ in various parts of Britain.

When Brealey began work in the Blackdown Hills, he asked God for a "body of iron and a soul of fire, " and for nearly twenty-five years he had his desire granted. In summer he preached in the open air and in tents, and in winter in halls, school-houses, cottages, and meeting places of all kinds. He had literally a passion for souls. In later years he evangelised through the large towns of England, wherever a door was opened of the Lord. Oftentimes he was heard saying, "My parish is the world. Anywhere for Jesus I would go, and anywhere I would preach, provided I would be allowed to take the Truth, the whole Truth, and nothing but the Truth."

Early in March, 1888, he was taken Home to be with the Lord. In his last address he spoke as follows of the Blood of Christ: "We shall never get out of the sight of the Cross, and can never do without the Blood; and, may I say, never was the Cross of Christ or the Blood of the Lamb more precious to my soul than now—make much of the Cross, make much of the Blood." "He being dead yet speaketh," and the work on the Blackdown Hills is still carried on in the Name of Him who plucked such trophies of grace as brands from the everlasting burning.

Tom said ...
"George's daughter, Ellen Brealey, was a missionary with the China Inland Mission, to China. She married a widower and they had one baby son. Sadly, Ellen died after the birth of her son, in China." - from Ancestry
Wednesday, Dec 5, 2018 : 06:23
Brian john Kiernan said ...
The world is such a huge and mixed up place . It has been and always will be . To have men like George Brealey to bring Jesus Christ to people who just don’t understand what faith in god means ; is a great inspiration for me ,to know that there will always be someone to bring Christianity to these lost and daunting people ,is a wonderful thing .to know that a man like George Brealey has inspired so many men and women to take over such a wonderful legacy that George has left to the World .kind regards
Brian Kiernan .
Friday, Mar 13, 2020 : 00:16
Marty said ...