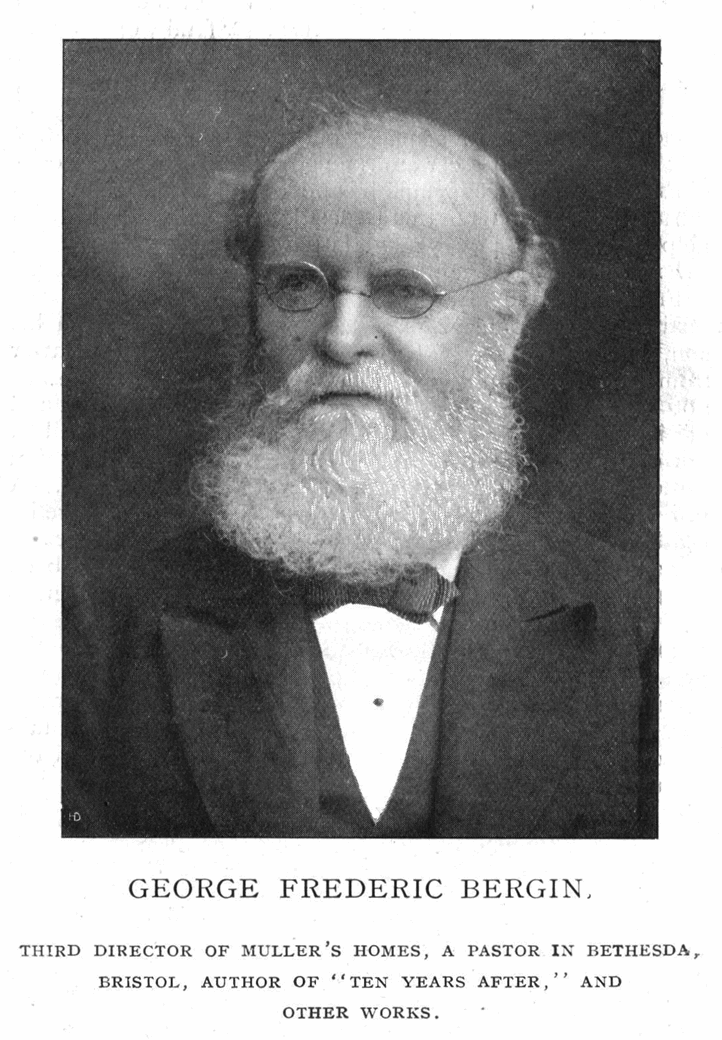 GEORGE FREDERIC BERGIN, the third director of the New Orphan Houses, Ashley Down, Bristol, was born in Cork, 25th April, 1843. He was religiously disposed, but his definite conversion took place at the age of sixteen years, as the result of words spoken by his father on his death-bed. The conversion appears to have been very thorough, as a clean cut was made with the world and its attractions. From this attitude he never swerved. Worldly entertainments were given up, and sometimes when parties were going on in the family he would be in his bedroom having Bible readings with young men. In early life he was apprenticed to an ironmonger, but when about eighteen years of age, he was conscious of a call to the ministry, and was accepted as a candidate for the Baptist College in Stokes Croft, Bristol. But his own study of Scripture convinced him that the position taken by the Christian community known as "Open Brethren" was a right one, and he consequently abandoned the intention of entering the Baptist ministry.

At the age of twenty-one he married Ellen Maria Gower, of Cork, and went to live at Youghal. Both at Cork and Youghal he was most active in Gospel work. Within twelve months of their marriage Mr. and Mrs. Bergin removed to Cardiff, where Mr. Bergin had a good business position. In the year 1873 they moved to Bristol, and after a short time spent in business life in this city, Mr. Bergin devoted himself entirely to pastoral work in connection with the Church at Bethesda, trusting to the Lord alone for his temporal supplies, and those of his wife and five young children. Into this work Mr. Bergin threw himself most heartily. The church was a large one, with a membership of about twelve hundred, meeting in four chapels in different parts of the city. In addition to regular ministry in these various places, systematic pastoral visitation was diligently carried on, nothing being left undone that could be done to guide, strengthen, and comfort the flock of God. Many can testify to the value of this service.

Mr. Bergin had a warm interest in foreign missions, and was ever ready to encourage any whose thoughts led them in the direction of such service. Two members of his own family, a son and daughter, became missionaries in China, the former being invalided home after four years' service. In the year 1897, in company with Mrs. Bergin, he paid a visit to Demerara and Barbados in connection with missionary affairs in those countries, and spent some time in ministering among the native churches. At a later period he also visited Italy, where mission schools are carried on in connection with the Scriptural Knowledge Institution.

In March, 1898, Mr. George Muller died, and the burden of the directorate fell on his beloved son-in-law, Mr. James Wright. Mr. Wright felt that he would not be left to sustain the burden of being a director alone, and he was presently assured that it was the will of God that he should ask Mr. Bergin to join him in the work. He had known him well for a quarter of a century, he had worked by his side in the Church; and though they were diverse in temperament, there had never been a break in unity or sympathy. Mr. Bergin was seventeen years his junior, and so likely to survive and succeed him. He was very fond of children, and had been much blessed in training his own in the fear of the Lord, and hence was fitted to take charge of this larger family of orphans. He put the matter before Mr. Bergin, and was delighted, but not surprised, to find that God had moved on his mind also, and in the same direction, for not only was he ready to respond to Mr. Wright's appeal, but he had been led to feel that he should after a certain time go to Mr. Wright and offer himself. The perfect sympathy and union of heart between the two friends rendered this association mutually pleasant and helpful during the brief years it lasted. After an illness lasting several weeks Mr. Wright died on 29th January, 1905, aged 79.

From this time Mr. Bergin became sole director of the institution, for some years receiving valuable help from his son, the late Dr. George Bergin, after the return of the latter from China through ill-health, as above mentioned. He was not a co-director, but was of great service to his father, and particularly during the last three and a half years of his life, devoting himself to the work with scarcely a day's interruption through illness till he expired, on 7th December, 1909. A few months later his second son, Dr. Wm. M. Bergin, relinquished his practice in London as a specialist in eye diseases to come to the assistance of his father, and recently has been appointed associate-director, becoming now, upon his father's death, director.

From the first Mr. Bergin adhered unswervingly to the great principles upon which the work at Ashley Down was originally based, especially the two great principles of "prayer and faith," and those familiar with the working of the establishments know that the noble traditions associated with the name of the founder, Mr. George Muller, have been preserved. But while doing this he has found it possible to introduce many helpful changes which the lapse of time and other circumstances have rendered necessary, and these improvements will always be identified with his name and the period of his directorate. He also found time to edit two or three books relating to the institution, which have proved very valuable, one particularly being a summary of the "Autobiography of Mr. George Muller." The plates of the original four-volume work were unfortunately destroyed by a fire at the printers, and as the resetting of such a work would be costly, and the demand probably small, Mr. Bergin prepared the abridged edition, with excellent illustrations. This has already had a wide circulation. Another book, entitled "Ten Years After," gives an account of the progress of the work since the death of Mr. Muller.

For some twelve months Mr. Bergin had been ailing, for eight weeks he had been,unable to attend to his duties, passing away at his residence in Clifton on 8th October, 1912, in his sixty-ninth year. Laid to rest in Amos Vale Cemetery.