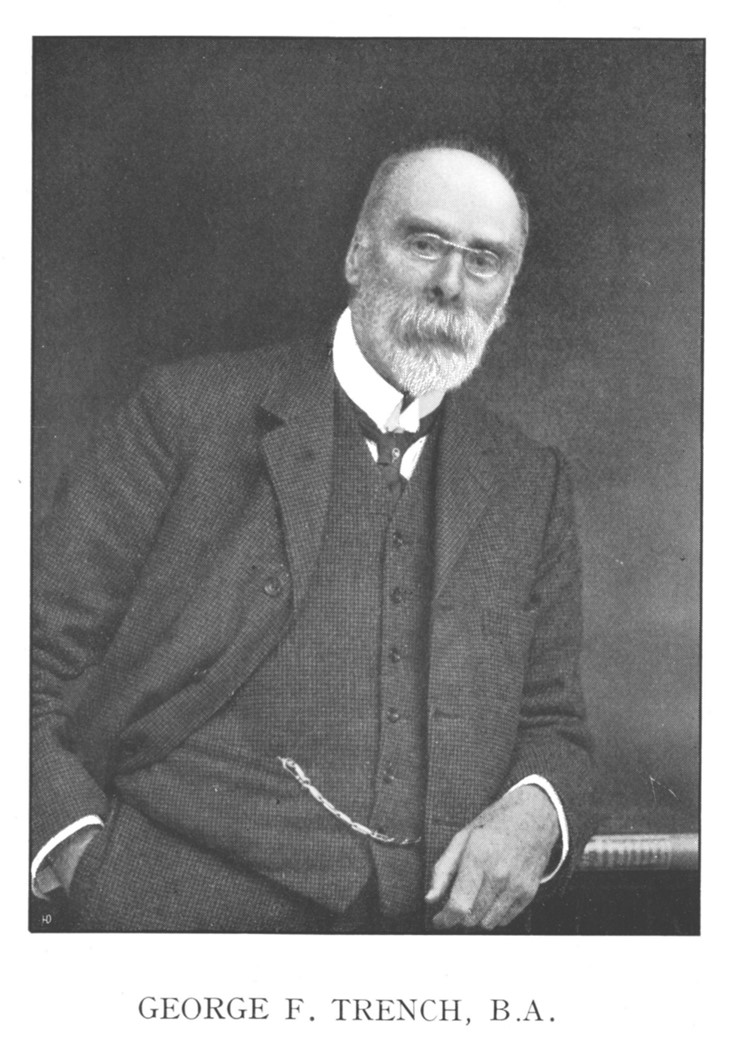 Second wife was the niece of Sir Robert Anderson.

GEORGE FREDERICK TRENCH was the son of Frederick Fitz-John Trench, formerly a cavalry officer in India, latterly rector of Staplestown, Ireland. Born in 1841, he was aroused as to the state of his soul whilst being prepared for Confirmation, deeply convicted through an address of Grattan Guinness on John 3. 7, and soon afterwards found deliverance. When at college, where he obtained his B.A., a friendship sprung up between himself and a student, who afterwards became Sir Robert Anderson, K.C.B., LL.D., and continued without interruption for fifty years.

Following on the wonderful Irish Revival on 1859, the early 60’s were “days of unleavened bread” in the south and west, as well as in the north of Ireland. The two student friends united in various evangelistic efforts in many parts of Ireland, and had considerable fruit in some of the districts visited. F. C. Bland, J. Denham Smith, R. J. Mahony, T. Shuldham Henry, Lord Congleton, and many other veteran workers were active at this time. Visits which left an impress behind were made by Richard Weaver, Harry Moorhouse, Reginald Radcliffe, John Hambleton, and many others.

Mr. Trench married Miss Talbot-Crosbie (a name honoured in the south-west of Ireland), and made his home at Abbeylands, Ardfert, Co. Kerry. For many years his influence for Christ and His Gospel was great in these parts. He regularly held meetings in the Granary at Ardfert, and many were led into the light or helped on in “the ways that be in Christ.” During the troublesome times in Ireland, Mr. Trench was held in high esteem and little molested, although once the horse on which he was riding was stabbed under him.

When the well-known American workers, MOODY and SANKEY, visited Ireland Mr. Trench threw himself heart and soul into the work as a work just after his own heart. Having received clear light on the evil of Sectarianism in his younger days, he was clear in heart and ways to the end. No man was more loyal to the truths dear to those who seek to gather in the Worthy Name alone.

An ardent worker, a diligent student, an able minister of the Word, ever a friend of the young, and interested in young men, also in policemen, soldiers, and other special branches of work, his influence was most widely extended by his pen. For over forty years articles bearing the initials G. F. T. appeared in The Witness, The Christian, and various other magazines, invariably to the profit and edification of the readers. His large volumes are: “After the Thousand Years,” which was much read, but has not generally been accepted; “The Life that is Life Indeed,” a sane, helpful work on life more abundant; and “Walking with God,” his latest and one of his most helpful volumes.

After suffering for some time, his closing days were very peaceful. The Home-call came on 11th November, 1915, and his remains were laid to rest in Mount Jerome Cemetery, Dublin, there to await the time when the changed saints shall cry, “O death, where is thy sting?” the raised saints cry, “O grave, where is thy victory?” and the united shout be heard, “Thanks be to God, who giveth us the victory through our Lord Jesus Christ.”