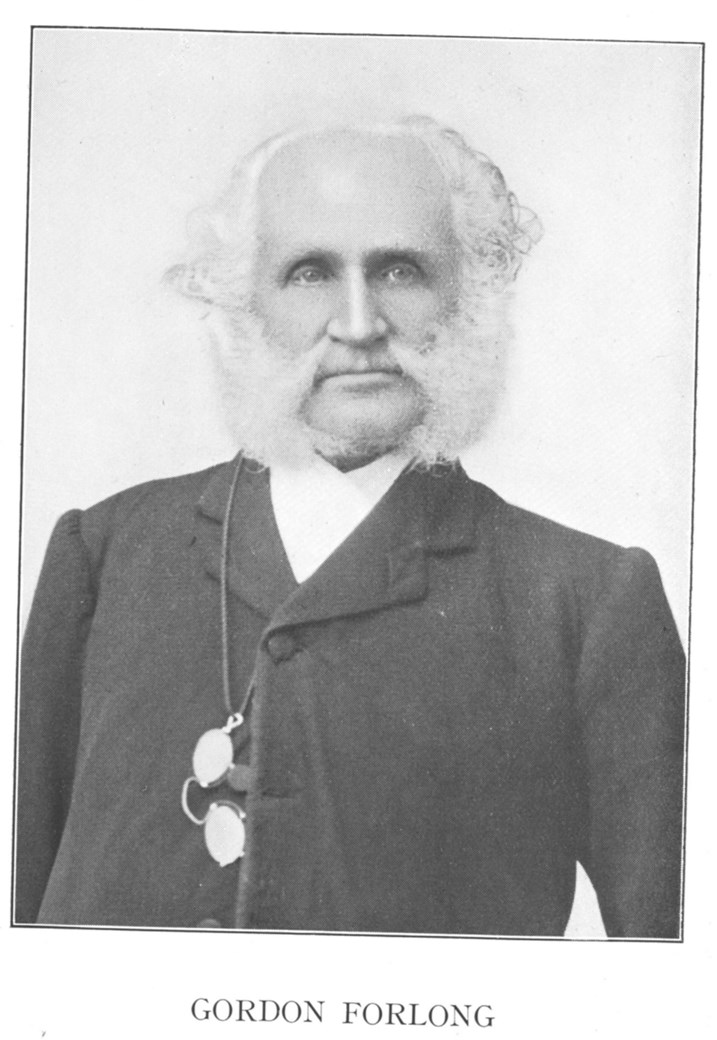 GORDON FORLONG was named after his grandfather, General Gordon of Parkhill, Aberdeenshire. He studied law in Edinburgh, practised as an advocate in Aberdeen, and was then, as he put it, "a very prejudiced young deist." Notwithstanding his deistical opinions, nourished by the reading of the principal deistical works of his day, he actually started what he termed "the Bank of Good Character and Skill," the object of which was to help young men of good character to obtain reliable situations.

The young advocate went up to London in 1851, hoping to collect funds for his project. His conversion through this visit is related as follows by Alex. Marshall, who spent some time with him in Wanganui in 1901: "Whilst in London he had occasion to call on Mr. Hitchcock, of Hitchcock, Williams & Co., St. Paul's Churchyard. On leaving, Mr. Hitchcock said to him: 'Mr. Forlong, what a pity you are not a Christian!' Unwilling to be drawn into a discussion on religion, he parried Mr. Hitchcock's thrust by saying, 'We Scotch people are well up in the Bible.' 'What a pity you are not a Christian!' was repeated by Mr. Hitchcock. The Scotchman hummed and hawed for a moment, and then said that he did not understand Mr. Hitchcock. 'If you think you are a Christian,' said the earnest soul-winner, 'sit down on that chair and talk to me about Christ.' I cannot do that,' replied Mr. Forlong. 'No; I knew you could not,' said the Christian merchant. 'Now, Mr. Forlong, I would be very pleased if you would be kind enough to read a small book that I have.' Mr. Forlong remarked that he read a good deal, and would gladly look over the book that he purposed giving him. The book he received was a copy of a treatise entitled 'The Philosophy of the Plan of Salvation.' As he studied it carefully, he was arrested by the words of Leviticus 17. 11: 'It is the blood that maketh atonement for the soul.' Whilst reading these words he was saved."

Like Saul of Tarsus when it pleased God to reveal His Son to him, "immediately he conferred not with flesh and blood, " but straightway preached Christ. His first public testimony was given in 1852. During the Revival years, from 1858 to 1862, he gave himself heart and soul to evangelistic work in Scotland, often in active association with Brownlow North and his cousin, John Gordon, of Parkhill. Enormous crowds gathered to hear the two "gentlemen evangelists. " Much blessing followed in Glasgow, Edinburgh, Aberdeen, Perth, Ayr, Dumfries, Montrose, Annan, and numerous other smaller towns. During these years, as afterwards in London, Mr. Forlong's Bible-readings were of immense help to the many young converts of those soul awakening days, the very memory of which brings inspiration.

Gordon Forlong began his Gospel work in the West of London in 1863 or 1864—preaching at first in the Victoria Hall, Archer Street, Notting Hill, chiefly used at that time as a theatre, afterwards in Victoria Hall, which became crowded, and necessitated the building of a large iron building, which Mr. Forlong named "Talbot Tabernacle." Lord Congleton, the Howards of Tottenham, and many others of note, were associated with this movement. With loyal devotion to the Bible, he taught the converts to receive nothing save from the Word of God.

There is one marked feature about the life and work of this faithful servant of Christ, which it is of the deepest importance to emphasize at such a time as the present—this was his careful and ceaseless study of the Holy Scriptures. He was truly "a man of one Book. " Referring to the earlier days of his converted life, he tells us: "I sat down to my Bible at 10 a.m., and, except for meals, I never rose till 10 at night. This plan I pursued for years. I had not a single commentary in the house."

His preaching was striking and very powerful, bringing comfort and strength to the people of God, but alarm and terror into the hearts of the unconverted. Mr. Forlong was a real warrior, and delighted to stand for the truth of God as he knew it. With him there was no compromise, no quarter, and no surrender. He made no apologies for the Scripture, but believed them and proclaimed them fearlessly. On one occasion he remarked that he never felt so much at home as when he was surrounded with difficulties so that he could not see his way out in any direction. This was an opportunity for God; and the position just suited his nature. He had backbone and grit, and possessed principles that he was quite prepared to fight for; characteristics, we fear, which are sadly lacking in the present generation.

Mr. Forlong appeared to belong to the past generation rather than the present, and his right company would have been the Puritans or Covenanters, who held, honoured, and valued the Scriptures, and if needs be, would be prepared to die for them. Although a scholar, he had no sympathy whatever with so-called Higher Criticism, now known as "Modernism."

His health giving way, he emigrated to New Zealand in 1876. He lived long in Wanganui, then at Rongotea, from which place he departed to be with Christ on 31st August, 1908, in his 90th year. For some time before his death his mental powers had weakened, but "the end was peace—perfect peace. "

Gordon Forlong was mainly instrumental in the conversion of J. R. Caldwell, for many years Editor of The Witness; Alexander Marshall, Author of "God's Way of Salvation;" C. H. Hinman, a well-known worker in New Zealand, and many others.

Mr. Forlong was certainly a remarkable man, and worthy to take first rank as a Bible evangelist and teacher of the Word of God. He stood for the truth of God, and held firmly to all the foundations right to the end.