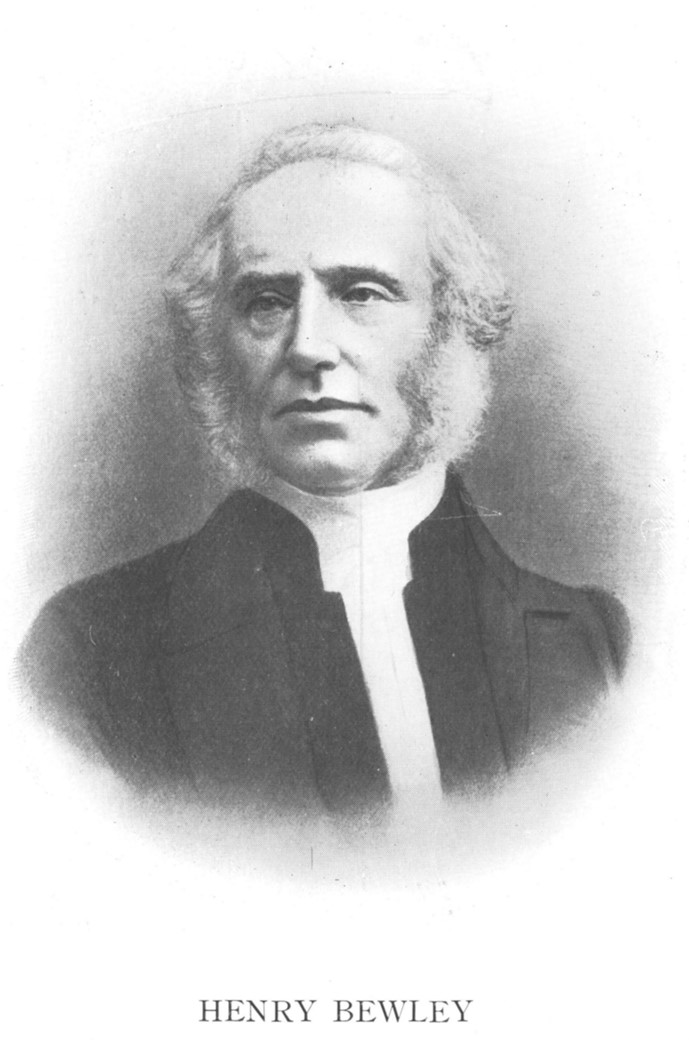 WHAT John Morley was to London, that, and more, HENRY BEWLEY, of Willow Park, was to Dublin. "Every man hath his proper gift of God; one after this manner, and another after that." In reviewing the career of this beloved and honoured servant of God, one is forcibly reminded of these words. Gifted, devoted, and useful far above the average, his main life work lay in a peculiar line. He was no great speaker, nor did he travel far and wide to spread a knowledge of the Saviour he so sincerely loved and served; and yet few men have done more to send the Gospel to their own generation than he. Between four and five hundred millions of tracts, prepared and printed at his sole expense, have been circulated in English, French, Italian, Spanish, and German and other tongues, and no set of tracts ever distributed are more full of simple Gospel truth and fundamentally important Christian teaching.

The spread of the Gospel was the object dearest to his heart and the edification of Christians came next. He was to a considerable extent the builder of Merrion Hall, Dublin, and the mainstay of the work carried on there. He was a man of large-hearted liberality, and the kind and genial host who, for so long a time past gathered round him twice a year, at the "Believers' Meetings, "hundreds of his fellow-Christians of all parties, from all parts of the kingdom, that they might enjoy refreshment for soul and body and go on their way rejoicing. The blessed influences that have gone out from these meetings eternity only will unfold. His funeral, which took place in Mount Jerome Cemetery, in the neighbourhood of Dublin, was very largely attended by ministers and members of all evangelical denominations, thus testifying their sincere respect and sorrow for the loss of the spiritually minded servant of the Lord. Peace in the presence of a sin-pardoning God and gracious Father, and assurance of triumph over death and the tomb, won by the resurrection of Christ, and secured to us in Him, were richly realised.

He died 28th June, 1876, aged 62. The faith which had sustained him soothed the sorrow of those who stood around the grave and committed his earthly remains to the dust to await the glorious Coming of the Lord Jesus. There are more photos if you follow the link and press 'next'.

There is another very informative obituary notice of Henry Bewley (as well as an account of his funeral) extracted from the Christian Herald  but published in the Cavan Weekly News for July 7, 1876.  It is accessible on line at http://www.irelandoldnews.com/Cavan/1876/JUL.html .  I had no idea before reading it that Bewley had an interest in the Transatlantic Cable, or that he owned coal mines in Germany...  Timothy Stunt