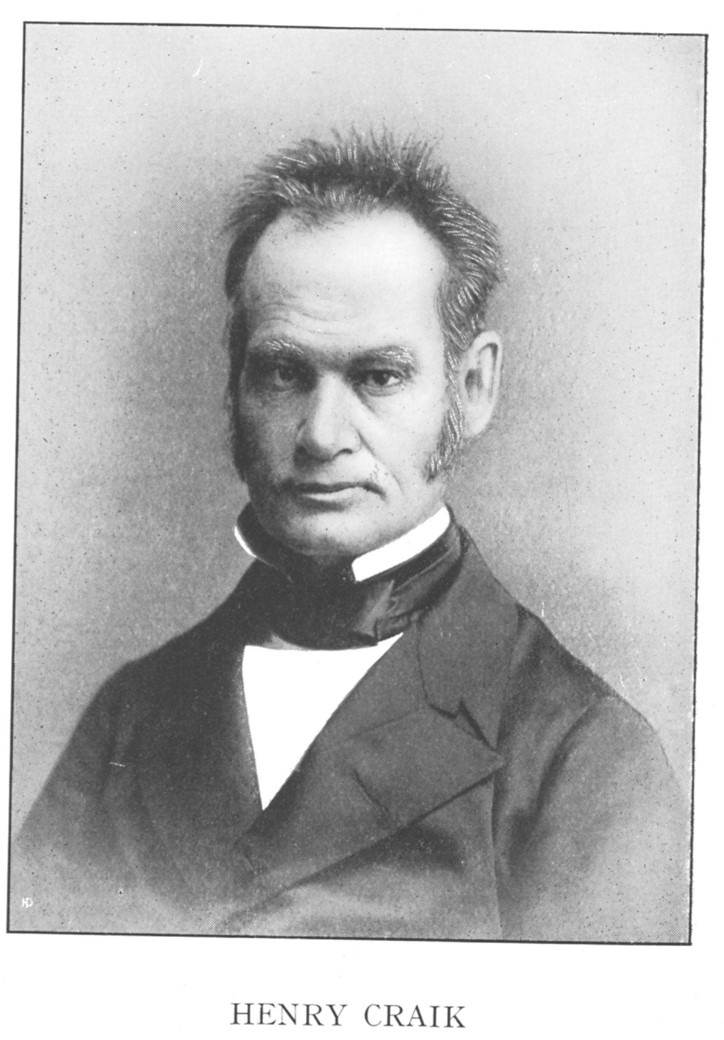 HENRY CRAIK, for forty-four years the beloved colleague in ministry of George Miiller, of Bristol, was born at Prestonpans, East Lothian, on the 8th August, 1805. After a course of instruction in the Parochial School of Kennoway (of which his father was the master), he entered St. Andrews University at the beginning of the session 1820-21, and studied under Professor Alexander and Dr. Hunter. Here he speedily gained distinction for his proficiency in Greek. In an old memorandum book, among other entries is the following from Mr'. Craik's pen: "1823-1824.-—Attended Greek, Latin, Natural Philosophy, and Dr. Chalmers' lectures. Obtained a prize in the Latin, and two in the Greek, the highest honour, as before. This concluded my Philosophy course, and qualified me for entering St. Mary's College, or the Divinity Hall. During all these years I had been living without God, though I read the Scriptures, and kept up a kind of formal praying, as far as I can recollect. My happiness consisted principally in my companionship; but I feel a difficulty in recalling my state of heart, except that I did not delight in the things of God."

In early days Mr. Craik's great mental powers made themselves manifest, and his own diary gives evidence of the extensive literary labours to which he devoted himself. It was in the year 1826, and about the twentieth year of his age, that the great spiritual change occurred which resulted in the consecration of his great abilities to the service of his Lord and Saviour. This change he himself especially attributed to the conversation and society of his college companion, John Urquhart. In 1826 Mr. Craik moved to Edinburgh, where for a time he was engaged in tutorial work as well as study, and continued to enjoy the ministry of Dr. Chalmers.

In the month of July in that year he "received a proposal to become tutor in the family of Mr. Groves, a gentleman then residing in Exeter," the well-known Anthony Norris Groves. This proposal was accepted, and he took up his abode in the family of Mr. Groves, where he remained two years. His admiration of Mr. Groves was very great, and while with him Mr. Craik commenced exposition of the Scriptures in a school-room at Heavitree. His time was now, and for some years onward, fully occupied with classical studies, in which he greatly delighted, and especially in the study of the original languages of the Bible.

In the year 1831 he took up his abode in Shaldon, Devonshire, and became pastor of the Baptist Church there. The same year he was married to Miss Mary Anderson, but after only a few months of married life she was taken from him early in 1832.

Mr. Craik's first meeting with Mr. Muller took place in July, 1829, at Teignmouth, and thus began the friendship which led on to the  association in ministry, and which remained unbroken till death.

In March, 1832, Mr. Craik accepted a pressing invitation to preach in Gideon Chapel, Bristol. Crowds flocked to hear him, and the second Sunday the chapel was crammed. A week later he was joined by Mr. Muller, and the two preached alternately in Gideon, as well as in other chapels in Bristol. There were many striking conversions. On the 1st May, 1832, Mr. Craik and Mr. Muller returned to Devonshire, but soon afterwards the way was made quite clear to return and settle at Gideon Chapel. The conditions on which these servants of Christ consented to settle at Gideon were—That they should be considered only as ministering among the people, and not as occupying any fixed pastoral relationship; that pew rents should be abolished, and that they should go on as they had done in Devonshire in respect to the supply of temporal wants.

Speaking of the removal of these two ministers of Christ to Bristol, Mr. Craik's biographer says: "If the angels of God have any knowledge, as we may reasonably suppose, of the future consequence of events, they must surely have rejoiced with exceeding joy as they witnessed the arrival of Mr. Craik and his colleague, Mr. Muller, in the ancient city of Bristol; for the former, in the course of a few years, was destined to take his stand among the very foremost of the ministers of the city; to become the friend and correspondent of some of the most able and learned men of the kingdom; an author eminent for his services in the cause of religion, Biblical criticism, and Protestantism, and, what is more, the spiritual father of some hundreds of Christian men and women; while the latter was not only destined to serve the cause of truth by his writings and his ministry of the Word, but, more important still, to become the Founder and Director of the New Orphan Houses on Ashley Down, and also of the Scriptural Knowledge Institution for Home and Abroad." After coming to Bristol Mr. Craik married a second time, the lady of his choice being Miss Howland.

The ministry begun at Gideon was afterwards transferred to Bethesda Chapel, and a little later Salem Chapel was also rented. In these buildings, for a long series of years, the church continued to grow and multiply, and the "little one became a thousand."

Mr. Craik was a man of true humility, self-forgetful to a fault, and exceedingly affectionate and approachable. To have known him and enjoyed his ministry is among the most precious memories of the writer. There was nothing heavy about his discourses, but verily they were solid to a degree. He was "mighty in the Scriptures," and his sermons were rich in expository wealth. One discourse of his would shed light on a large field of Scripture. His sermons on Sunday evenings usually lasted a full hour, but instead of this being a weariness or cause of complaint, it was with regret that hearers observed the approach of the time for closing the service. Rugged and somewhat careless in appearance, a stranger might at first be disappointed, but such a feeling would soon vanish before the outbursts of truly natural eloquence and the glowing fervour which habitually characterised his delivery. His readiness to enter into the spiritual difficulties of any member of the church was a marked feature, and the writer cherishes the memory of one such instance of a special kind, when he not only replied by a letter (which is still preserved), but took up the topic in question on two subsequent occasions in ministry. His removal in 1866, at the comparatively early age of sixty-one years, was an irreparable loss, and the immense concourse at his funeral testified that the loss was felt by the whole Christian community.