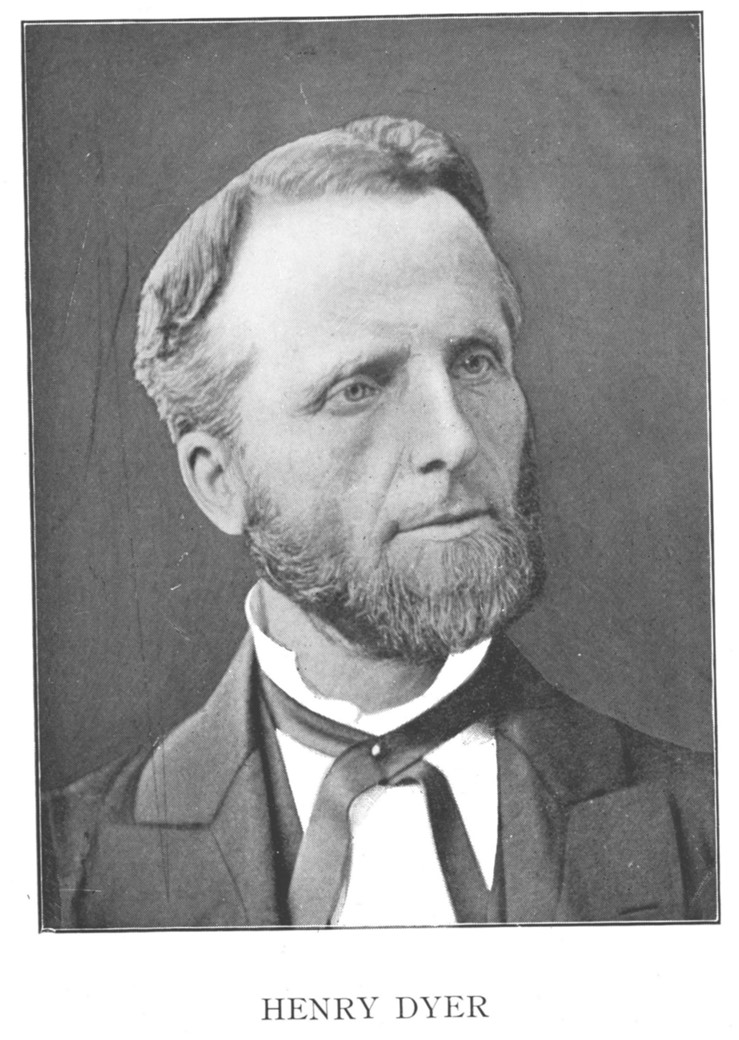 HENRY DYER was brought to the Lord at an early age, and first met with Christians assembling only in the Lord's Name in London about 1846. Soon after he spent some years at Wellington, Somerset, and at Weymouth, in the family of the late J. G. Deck (whose hymns have so greatly helped the worship of many believers), and then was for a time at Sherborne, in Dorset.

His brother, Mr. William B. Dyer, a man of exceptional gift as a preacher of the Word, had gone to Yeovil about the year 1848, and was much used of God there and in the neighbourhood. Mr. Henry Dyer, who was considerably younger, frequently visited him, and took up his abode in Yeovil about 1860, after his brother went to Kendal.

With the feeling that the occasional assembling of servants of Christ for united prayer and conference over the Scriptures was calculated to help them in their service, Mr. Dyer began a meeting for this purpose in Yeovil when such conferences were rare, and though comparatively small, it was very much valued. This meeting was held quarterly, and was the precursor of the larger and more extended annual meetings in that town. His faithful and loving service of those days is gratefully remembered both in Yeovil itself and in neighbouring towns and villages, and he loved at times to speak of one and another who were brought to God through his reading the Scriptures and speaking at street corners—a work in which he was very diligent as long as he was able to continue it.

Where he remained in any locality he was pre-eminently a pastor. His tenderness in visiting the suffering and the sorrowful was very marked, and his earnestness in seeking the wandering showed how truly he watched for souls, while his readiness—at any cost to himself—to contribute to the breaking down of barriers between the Lord's people gave evidence of his possession of the mind of Christ in no ordinary
measure.

During the last months of his brother's illness he lovingly ministered to him, and after his departure to be with Christ, in June, 1865, he remained for some time in Kendal, where he was followed in service by Mr. Henry Groves. After this he spent some years in Exeter, Bath, and Malvern. But, while many assemblies profited much by his visits, his specially fruitful service for the past five-and-twenty years was connected with the conferences which have become so much more general. From the beginning of the Leominster conferences "the three Henry's," as they were sometimes called—Henry Heath, Henry Dyer, and Henry Groves—gave themselves in true fellowship to the sustaining of these annually or half-yearly at Dublin, Belfast, Glasgow, and many other places Mr. Dyer's unique and powerful exposition and application of Scripture caused his presence to be much desired and valued.

A few years back, on account of weakness in his chest and throat, Mr. Dyer was advised to spend the winter in a more suitable climate than the British Isles, and this was doubtless God's way of leading His servant to many countries in the four quarters of the globe, in which scattered and solitary servants of Christ were much refreshed and encouraged by the visits of himself and Mrs. Dyer. He had long done his
utmost to help forward efforts for spreading the Gospel in Romish and heathen countries, and these visits enabled him to speak still more forcibly of their deep need, and to exhort Christians of these favoured lands to take their share in this great work.

His last long journey was to South Africa, which he reached in February, 1895. There, besides spending a good deal of time in Capetown, Durban, and Johannesburg, he and Mrs. Dyer took long and wearisome journeys to visit believers in out-of-the-way places. In Johannesburg they were shut up during the grave troubles in the early days of 1896, when it seemed probable that the city would be the scene of warfare, and our dear brother's ministry and example greatly strengthened the faith of many there at the time. But, while doubtless the climate helped him in some ways, the strain of all this told upon him, and when they reached England in May he was very feeble; yet it was hoped that rest and care would restore him to health, which hope in some measure was realised.

After the conference at Leominster in June they visited Malvern, where he was taken very ill, and they then went to Bournemouth. In August they left for Barnstaple, stopping en route at Exeter, where he gradually grew weaker, and peacefully fell asleep on 15th November, 1896, in the 75th year of his age. Like "David, after he had served his own generation, by the will of God, he fell on sleep" (Acts 13. 36).

Our brother was well known as "a ready scribe" or teacher of the Word of God, the secret being that, like Ezra, who is thus described, "he prepared his heart to seek the law of the Lord and to do and to teach it. " It would of necessity be known only to a smaller circle that, if possible, a more marked characteristic was his intense sympathy, the exercise of which was aided by a remarkable memory. His letters were often very helpful, and he was a most diligent correspondent, but he was also a man of prayer, and, rising early, he habitually sought to remember many at the mercy seat. The fragrance of his memory remains in the hearts of a large number who profited by his ministry.

If this would be of interest to your archive I would be happy to attempt to scan it. I must point out however that my computer ability is very limited and I would need the help of my daughter. Sunday, Jun 16, 2019 : 23:46
Eluned Schweitzer said ...
Greetings,
I have in my possession a copy of Volume XI of Things New and Old which is a family
relic. It is inscribed with the name George Dyer and the address 16 Clarance Road, Near Truro, Exmouth. In October 1872 he was living in Merthyr Tydfil. I think his initials were actually FG Dyer, the F being for Frederick.

I believe he is a relative of some kind, possibly a great grandfather or great uncle of mine and wonder if you have any records of him, possibly as related to the other Dyers in the
Exmouth area.

Many thanks for your help,