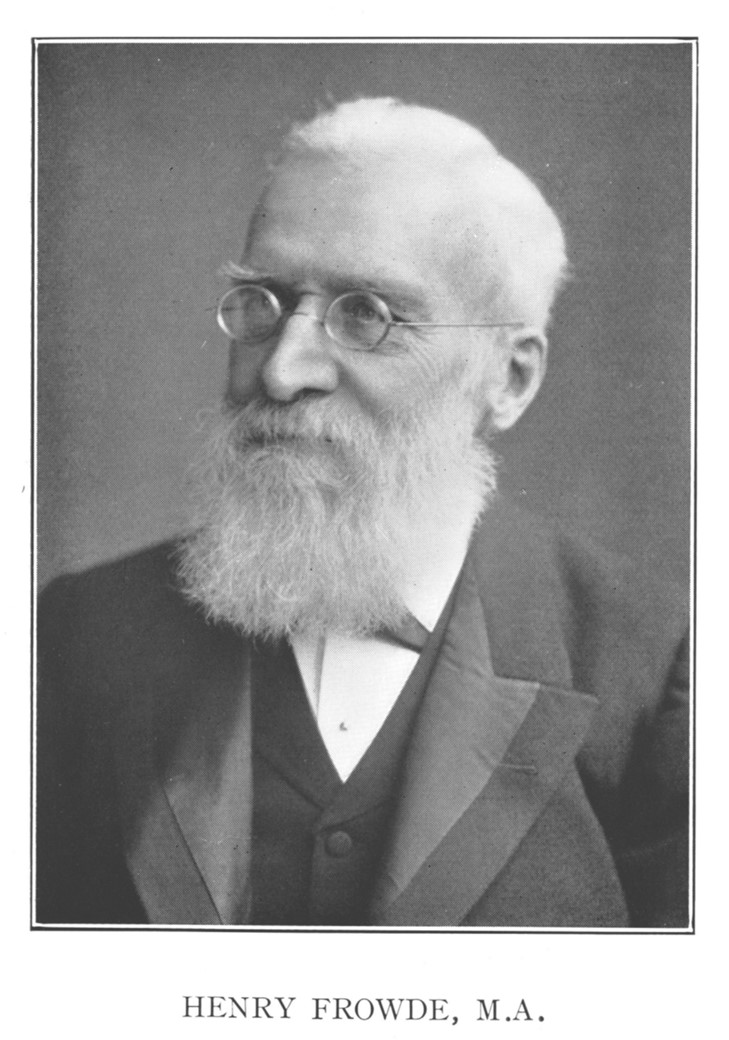 HENRY FROWDE, M A .came of Devonshire stock, from which, he liked to recall, Froude, the historian, sprang, and he was a relative of Mortimer Collins. At the age of 16 (he was born on 8th February, 1841), Mr. Frowde entered the service of the Religious Tract Society, and later became manager of the London Bible Warehouse, in Paternoster Row. Professor Bartholomew Price, afterwards Master of Pembroke, became Secretary to the Delegates at Oxford in 1868. His was one of the greatest names connected with the Press, and his was the inspiration to offer the management of the London Office of the Oxford University Press to Mr. Frowde, who entered upon his new duties in February, 1874. In 1874 there were 25 Oxford Editions of the Bible current; twenty years later the number had increased to 78. Now the numbers are larger still.

The first Oxford Bible that Mr. Frowde published was a diamond 24mo, of which 250,000 copies were sold promptly. This was printed on Oxford India paper, which was soon to revolutionize the trade in Bibles, devotional works, volumes of poetry, etc. Some paper had been brought in 1841 from the Far East, just sufficient for the printing of 24 copies of a diamond 24mo Bible, not for sale. At Mr. Frowde's suggestion experiments were made to imitate this paper, with the happy results known to all book-lovers. Mr. Frowde rose fully to the occasion with the Oxford Bible for Teachers, which in 1876 had assumed a shape generally resembling its present form. Many millions of this have been sold. Mr. Frowde had a happy knack of creating and anticipating public taste. His Finger Prayer Book is a case in point; within a few weeks 100,000 copies were sold. Thus, undoubtedly, the name of Frowde appeared on more volumes than that of any other publisher, and if this be fame, he attained it abundantly. But Mr. Frowde was seen at his best when something out of the ordinary had to be done; when, for example, new editions of the Prayer Book had to be produced at top speed, following changes in the royal succession, or in the titles of the Royal Family, e.g., the present King, who before he became Prince of Wales, appeared in the Prayer Book as Duke of York.

Only those personally acquainted with Mr. Henry Frowde, and they were few, could appreciate his undoubted genius which was of the painstaking order. Mr. Frowde never spared himself, and his energy was extraordinary. His foresight in business was not less remarkable than his courage and organising ability. It is true that he was fortunate in his stage—the Oxford University Press—and in the spacious times in which he laboured. He was the hero of what has been called "the greatest publishing feat on record," the publication within twelve hours of a million copies of the Revised New Testament. That was in 1881, and one cannot imagine the present generation exhibiting such excitement over a Bible (it was noticeable to a less degree when the Revised Bible was published in 1885), nor bookseller selling now, as then, 150,000 copies in one day.

But Mr. Frowde was always proud of the Caxton Memorial Bible (1877). The printing of this began at Oxford at 2 a.m. ; the sheets were forwarded to London, there folded, rolled, collated, sewn, gilded, bound in Turkey Morocco, and delivered at South Kensington before 2 p. m., where the 400th Anniversary of Caxton was being celebrated. Mr. Gladstone described this "as the climax and consummation of the art of printing."

In 1880, Mr. Frowde was appointed Publisher to the University, taking over the publication of the classical and learned Clarendon Press books. His stupendous success with Bibles, etc., his main interest, made it possible for the delegates to arrange for the publication of works which would have taxed too severely the resources of an ordinary publisher, e.g., the Oxford English Dictionary.

Mr. Frowde was a fine judge of printing and binding, but he was not a professed scholar, much less an author-publisher; yet the honorary degree of M. A. which the University granted him in 1897 was as much appreciated by him as it was deserved. In the meantime Mr. Frowde had opened branches in Edinburgh and Glasgow, to be followed in due course by branches in New York and elsewhere, laying the foundations on which his successor, Mr. Humphrey Milford, built to such striking purpose. Mention should be made of the Oxford Poets and other popular series which owe their being to Mr. Frowde and are now famous.

Not demonstrative in his religious views, all his Christian life he was associated with brethren known as "Exclusive." In 1913, at the age of 72, Mr. Frowde retired with, as it was thought, but a short time to live. The doctors were wrong, however, and the last 14 years he spent quietly at Croydon, enfeebled, but interested to the last in the great institution to which he had devoted his great gifts for 39 years. He was called Home on March 3rd, 1927.

Interesting person I had never heard of before. I like the quote about how he related to his work colleagues;

'Frowde came from the book trade, not the university, and remained an enigma to many. One obituary in Oxford's staff magazine The Clarendonian admitted, "Very few of us here in Oxford had any personal knowledge of him."'
See: http://blog.bookstorey.co.uk/post/16857293136/henry-frowde

Yes I saw some notes to that effect;

Scofield visited England twice and spent two years in Switzerland while researching material and seeking technical advice concerning the publication of the Study Bible. One man who would prove to be invaluable in the latter regard was Henry Frowde of London. Frowde fellowshipped all his adult life with those known as “Brethren” and had distinguished himself as an authority in the printing and binding of Bibles.

In 1880, he was appointed Publisher to the Oxford University Press and Clarendon Press. He achieved at Oxford what was once considered impossible–the publication of 1,000,000 New Testaments in one 12-hour period.

While in England, with the encouragement of Alwyn Ball of New York, Mr. Scofield was introduced to Mr. Frowde. After meeting with Frowde, Scofield was advised, “There is only one publishing house which can handle your Reference Bible, and that is the Oxford University Press.” An agreement was reached between Scofield and Oxford University Press, and in January of 1909, the first Reference Bible rolled off the presses.

His Finger Prayer Book is a case in point; within a few weeks 100,000 copies were sold

It's interesting though if he was an "Exclusive", how he did things like publish The Book of Common Prayer. Wonder what branch of the meetings he was with.

The Publishers' Circular and Booksellers' Record of British and Foreign Literature, Volume 63 (Aug 17, 1895) pp.158-62 carried an article about the Oxford Clarendon Press, based  on a lengthy interview with Henry Frowde.  It includes a photograph of Frowde as a younger man than the picture in Chief Men. see [https://books.google.com/books?id=ydBOAAAAYAAJ&pg=PA158&lpg=PA158&dq]  Timothy Stunt

Monday, Oct 21, 2019 : 01:51
Rodger said ...
Is this the same Mr. Frowde mentioned here: https://www.stempublishing.com/magazines/bt/BT_NS01/1897_335_Logia.html ? And is this article by him, or another?
Monday, Oct 21, 2019 : 02:52
Wanda said ...
Among a great uncle's (not sure his birthdate, but since I am 86 it must have been a long time ago) things, I found a tiny New Testament (given to him by his mother) which said Oxford printed at the University Press London Henry Frowde Oxford University Press Warehouse, Amen Corner NewYork: 91 & 93, Fifth Avenue, It has a coat of arms with two crowns at the top the center part looks like a book with printing on it and a crown near the bottom.
Sunday, Dec 27, 2020 : 04:04
Jean Marie said ...
My mom, who is 81, just gave me a Bible that was given to my great grandmother. It seems to be from the same printing as the one, Wanda, is speaking about above. There is an inscription to my great grandmother dated January 8th, 1905. When I looked up Henry Frowde, I found this page. I am totally blown away. I've never had something so meaningful from my family history, I am beyond humbled and blessed.
Saturday, Jan 23, 2021 : 08:40
Louise said ...
I was given a small book of Common Prayer with Hymns A&M, there is an inscription written on the inside - Bought in London the day before sailing for America. Thursday, Aug. 16 1900
On the front page it states
OXFORD: Printed at the University Press, London: Henry Frowde, Oxford University Press Warehouse, Amen Corner.
This makes this prayer book 121 years old, a very special gift

Sunday, Feb 7, 2021 : 02:38
Candy young said ...
So blessed to gain this knowledge and read all these comments. I found blessed small Holy Bible at a thrift store in beautiful condition. The page was filled out for marriage from December 1909 and the names are still legible. My guess is it was a gift or purchase special for the marriage and looks seldomly read and kept with the family for all these years until, someone did not see the beauty in Blessing and what they were given. I will count myself blessed for finding a piece of history and will share it with loved ones. My is from the reign of King S. James, as it says. This article was awesome to find.
Wednesday, Feb 17, 2021 : 18:05
Johan said ...
Also got a small bible with the 3 crowns a week ago. Previous ownner G. Marsh. Wish I could get hold of him or his family. Bible was written by Henry Frowde. Small bible with red leather cover. I wonder what was the history of this New testament Bible? I am from South Africa
Saturday, Jul 3, 2021 : 19:26
Agnes said ...
My cousin has just passed on to me a Bible that belonged to my grandfather. My mother would have been 100 this year. On the spine is written Holy Bible/ Church Hymnary. Very curious I looked up Oxford Press, Henry Frowde, and hymnary. I kept looking until I came to your web site. So glad to have found information here.
Apparently this was a gift to my grandfather in his youth, for inside I found a hand written card "to Alexander Selkirk for good behavior in his Sunday school class.From your teacher David." WOW! My grandfather was born in 1879 and didn't come to America until after he was married. I know I have a treasure in my hands. The front page of the Bible is the same information as has been mentioned above in the other comments.
Friday, Jul 16, 2021 : 06:31
Nehro said ...
I have the original copys of holy Bible book written by Henry Frowde
Sunday, Jul 17, 2022 : 04:05
Nick Fleet said ...
In about 1878 Henry Frowde married Mary Blanche Foster Earle (born 1853 in Holloway, London). Mary's younger sister, Emma Irene Ainsworth Earle, had married Robert John Kell in 1876. R J Kell was associated with JND and subsequently with the Lowe Brethren (who did not go with TW in 1909). It's not conclusive but a possibility that, perhaps, Henry Frowde was in the same fellowship.
Tuesday, Jul 19, 2022 : 02:36