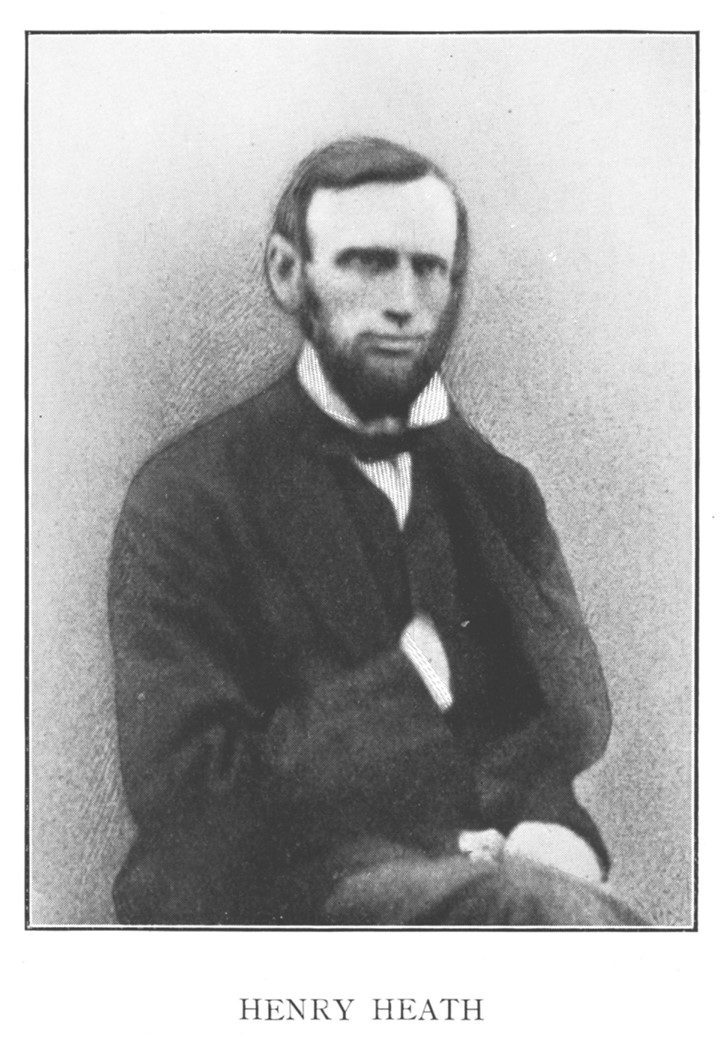 MOST brethren have heard frequent references to "the three Henrys," a trio of Bible students and expositors whose helpful ministry of the Word is gratefully remembered. They were HENRY GROVES of Kendal, HENRY DYER of Bath, and HENRY HEATH of Woolpit, Suffolk.

HENRY HEATH was born at Teignmouth on 16th November 1815. About the year 1839 in the village of Tawstock, Mr. Heath was engaged as the schoolmaster in the school connected to the Tawstock Church. During this time he was studying for holy orders, and whilst thus engaged he was introduced to Mr. R. C. Chapman, of Barnstaple, who gave him an invitation to the Bible readings held in No. 9, New Buildings, every Thursday. To these readings Mr. Heath regularly came when his duties at the school were finished. He was greatly interested in the simple way of expounding the Word. The power of the Holy Spirit in unfolding the mind of Christ, through the Scriptures, so affected him that he became more and more exercised about his own position and purpose in life.

On one occasion Mr. Heath mentioned to a friend that the Scriptures had become a new power to his own soul, and he was learning that the Bible was a living book, not only a theological work, fitting his mental powers for study in Hebrew and Greek, but that it was the inspired Word of God, given to the Church of God in all ages.

Then came the exercise of soul about obedience to the revealed will of God. After much waiting upon God in prayer he gave up his study for holy orders and obeyed the voice of God, following Abraham of old in the pathway of unreserved obedience to the Scriptures of Truth (John 8. 32).

The frequent visits to Mr. Chapman's humble dwelling and the simple manner of life, with the deep, spiritual trust in the Scriptures, followed out day by day by this man of God, caused such deep searchings of heart in Henry Heath that he said his path was the only way of peace, "obedience to the revealed will of God given in the Scriptures of Truth." This was the beginning of a lifelong friendship, and from that time (to quote Mr. Chapman's words) "there was always Henry Heath's room at our house ready for him when he came."

About 1848 he went to Hackney, where he was for twenty one years, and from there to Woolpit, a remote village in the heart of Suffolk, six miles from a town and two from a railway station. Here this faithful servant of the Lord spent nearly thirty years of his life, putting into practice the text that came so forcibly to him many years previous: "Seekest thou great things for thyself ? seek them not" (Jer. 45. 5). Hidden away from the multitude, unseen and unheard by the many, yet through the power of the Holy Spirit being a great blessing to those with whom he came in contact. People from fifteen different villages (some of them six miles away) would come regularly to Woolpit room to have the privilege of sitting under his ministry, and go away refreshed and strengthened. This Room was built on a squatters' claim, accommodating about 300, has a residence, stables for several horses, and a graveyard in which lie many of His Own.

In the year 1900 the call came for higher service in the presence of the Lord whom he had loved so long and served so devoutly. His name is revered still, not on account so much of the man who bore the name, but that blessed One of whom he spake.

The North Africa magazine of February 1899 also carried an obituary of Heath which I quoted in full in my (otherwise German) blog in 2015.