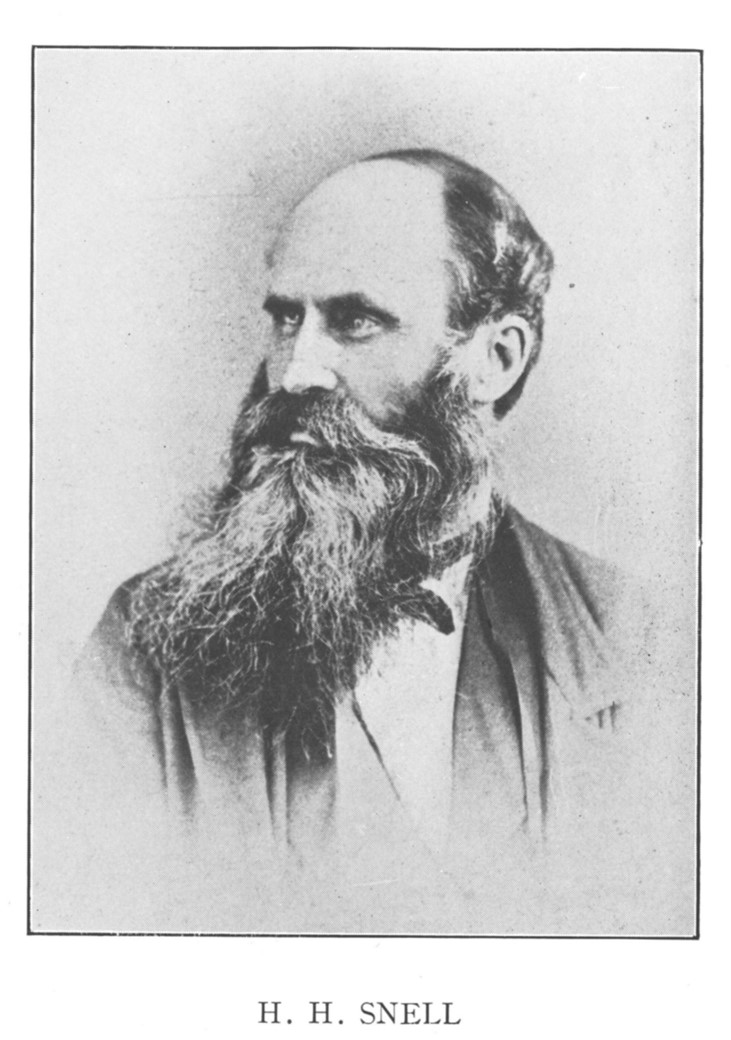 The dates for him in Chief Men are considered incorrect.

Hugh Henry Snell was born in 1815. He was con­verted early in life. He practised as a doctor at Lifton, on the banks of the Tamar, in Devon, and also at Launceston, Cornwall. He frequently preached at the little meeting of "brethren" at the latter place. Afterwards, on removing to Plymouth, he associated himself with J. L. Harris and Henry Bulteel - both ex-clergymen - for many years in preaching and teaching. He gave up his practice, and devoted his life entirely to the work he believed God had called him to. While at Plymouth he entertained the Lord's servants most hospitably, R. C. Chapman being a frequent guest; and John Hambleton mentions in his well-known book, "Buds, Blossoms, and Fruits," that he stayed with "Brother" Snell at Plymouth.

Later on Mr. Snell preached and taught in many of the large cities and towns of England and Ireland, besides visiting and confirming (in the true Scriptural sense, i.e., strengthening) the smaller meetings then springing up all over the country. Eternity alone will declare the value of this work. Equally gifted with his pen, he wrote largely on prophetical and other subjects. His works most known being "Streams of Refreshing," which has run through twelve editions; "Notes on the Book of Revelations," "Lectures on the Second Coming," "Inspiration of the Scriptures." He was a much valued speaker at the famous Meetings on Prophecy at the Freemasons' Hall, in 1864, and it is interesting to note that the other speakers at these meetings included such gifted "chief men" as L. Strong, J. L. Harris, H. W. Soltau, J. M. Code, Lord Cavan, P. H. Gosse, W. Lincoln, C. Hargrove, and several others. Mr. Snell fell asleep in Jesus, very happily, at Stafford in 1891.

Steve Noble said ...
My copy of "Chief Men" says HHS died at Sheffield not Stafford. It is also difficult to reconcile the host of 'open-brethren' names in his biography, with the fact that he is said to have prayed at JND's funeral, and composed recollections of the last days of Charles Stanley. Anybody able to help?
Monday, Sep 12, 2022 : 04:41
Nick Fleet said ...

In some notes complied in 2004, the late Edwin Cross wrote "he [Snell] participated at the Brethren’s Three Day’s Meetings at the Freemasons Hall in 1865 where the subject was the Lord’s Coming. He shared the ministry of the Word of God at this conference with H.W. Soltau, J.L. Harris, Leonard Strong of British Guiana, Hon. W. Wellesley and other notable teachers. When he quit the Open Brethren he came among those who practiced orthodox exclusive principles, he soon found plenty of opportunity for his gift. The platform at the first and second Manchester conferences (1873 & ’76) was shared by many ‘lights’: W.J. Burton, Charles Stanley, Christopher McAdam (W.J. Lowe’s father in law), J.E. Batten, J.B. Stoney and H.H. Snell all took part. In 1877 Snell’s home address was 17 Eyre Street, Sheffield. The 1881 census shows him and his wife living at 20 New Machon Bank Road, Ecclesall, Bierlow, Yorks. In 1882 he was living at Montgomery Mount, Sheffield. Hugh Snell visited Mr Kelly’s meeting in Blackheath and gave acceptable ministry to the many saints gathered there. He worked with men of common interest in the gospel such as Charles Stanley and Andrew Miller."

The 1891 census (taken 5 April) shows him living at 1 Kenwood Avenue, Ecclesall Bierlow, Sheffield (although his age and birthplace are incorrectly recorded as '74' and 'Sheffield, Yorkshire' - possibly these details were supplied by one of the two servants also resident).  My late father-in-law often pointed out his house opposite the main railway station in Sheffield.  I have a photo of his headstone somewhere, he is buried in Sheffield.  He was a retired Eye Surgeon.

Monday, Sep 12, 2022 : 17:57
Syd said ...
JND and Snell exchanged letters, particularly on Christ's sufferings in respect of which Darby's treatise on "classes of suffering" was attacked by some. In fact HH Snell had a similar grasp of the classes, and it seems that he had some questions for Darby. It is no surprise that he was prominent at Darby's funeral.
Monday, Sep 12, 2022 : 22:15
Steve Noble said ...
Many thanks both. I have observed that many Brethren histories select facts that fit their narrative, and leave out those that don't. This is not a truthful way of dealing with history even though perhaps nothing untruthful is put on paper. The biography of HHS in "Chief Men" seems defective in the same way.
Tuesday, Sep 13, 2022 : 02:22
Steve Noble said ...
Just to follow on from what Nick wrote I got the following off Sheffield indexers:
SNELL, Hugh Henry (Gentleman, age 74).
Died at Kenwood Avenue; Buried on January 30, 1892 in ~ ground;
Grave Number 3, Section X1 of Norton Cemetery, Sheffield.
Tuesday, Sep 13, 2022 : 02:35
Timothy Stunt said ...
In August 1866 Wigram wrote to Darby reporting a conversation with Snell in which Snell stated his decision to abandon 'his zeal against the exclusives for ever so many years past' because it had 'shut him up into practical unholiness' (Letters of Darby Supplement: Correspondence with G V Wigram ii.252.) This would have been a year after his participation with Open Brethren at the Freemasons Hall in 1865. Timothy Stunt
Wednesday, Sep 14, 2022 : 03:54