An Inquiry as to whether there is even one Scripture in the New Testament to prove that "the Temple," "the House of God," "the Church," or "the Sanctuary" means, in this dispensation, a building of wood or stone, and the services a round of formal ceremonies; with a word on "the Chapel." 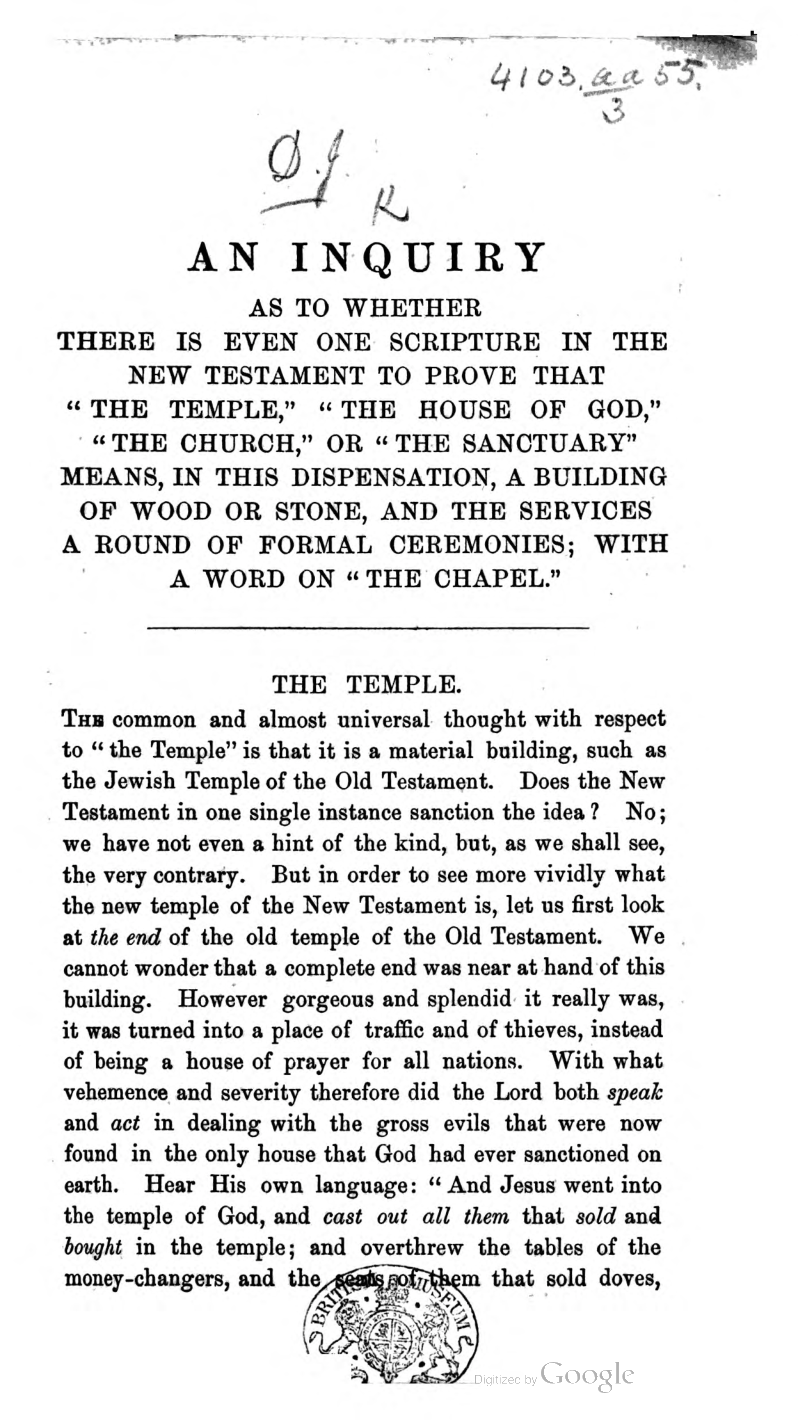 Other Brethren Books By "J. D."

D. (J. ) Sixty solemn proofs from Scripture that instead of the professing church getting better it will continue, and even increase, in evil, until the Lord Jesus Christ comes again. [Signed "J.D."] (New edition.) (London, G. Morrish,)[n.d.] 24p. 7.5". (Online)

D. (J. ) What is the character and condition of the unconverted? [Signed "J.D."] (London, G.Morrish,) [n.d.] 4p. 7". One of a collection of tracts formerly belonging to William Trotter.

DOUGHTY (J ) The book of Numbers in the New Testament: being the substance of readings on the Epistles to the Corinthians; Belfast,October,1904. [Conducted by](J.D)[oughty]. London, G.Morrish,(1905). iv+231p.

DOUGHTY (J ) Godliness, or Christian piety, and the way to maintain it, being the substance of readings at Donaghadee. London,G.Morrish, (1905). 56p.

THE REPRODUCTION OF CHRIST IN TROUBLOUS TIMES

… What a provision we have in Philippians 4 for these troublous times. How gracious of our God to put a man of like passions with ourselves through such painful and varied experiences in order that he might show us how to act in all circumstances. It has pleased God not only to send His beloved Son into this world, and pass Him through every possible trial and temptation in order to be our perfect High Priest, but He has proved to us the perfection and suitability of all that He has brought to pass by and in Christ, in men like ourselves. Christ has been reproduced as far as it is possible in the apostles, and specially in Paul, and hence the latter could say to us, "Be imitators all together of me" Philippians 3: 17); "What ye have both learned, and received, and heard, and seen in me, these things do; and the God of peace shall be with you" (chapter 4: 9). This reproduction of Christ in men during His absence and rejection is almost more wonderful than the presentation in Himself before His death. We may therefore conclude that the upset in the world and all the confusion in the Christian profession is divinely permitted, without, of course, excusing any one, in view of helping on this wonderful subjective work in the souls of persons, in order that the absent Christ may have a place in peoples' hearts while this world is, in the patience of God, rushing on to destruction. How blessed to be in the secret of the Lord, to know what God is doing in a day when so many are absorbed by man's activity. Are we God's fellow-workers? Are we helping on what He is doing? I feel we need to be much in prayer, and have God's thoughts, and so be here for Him.