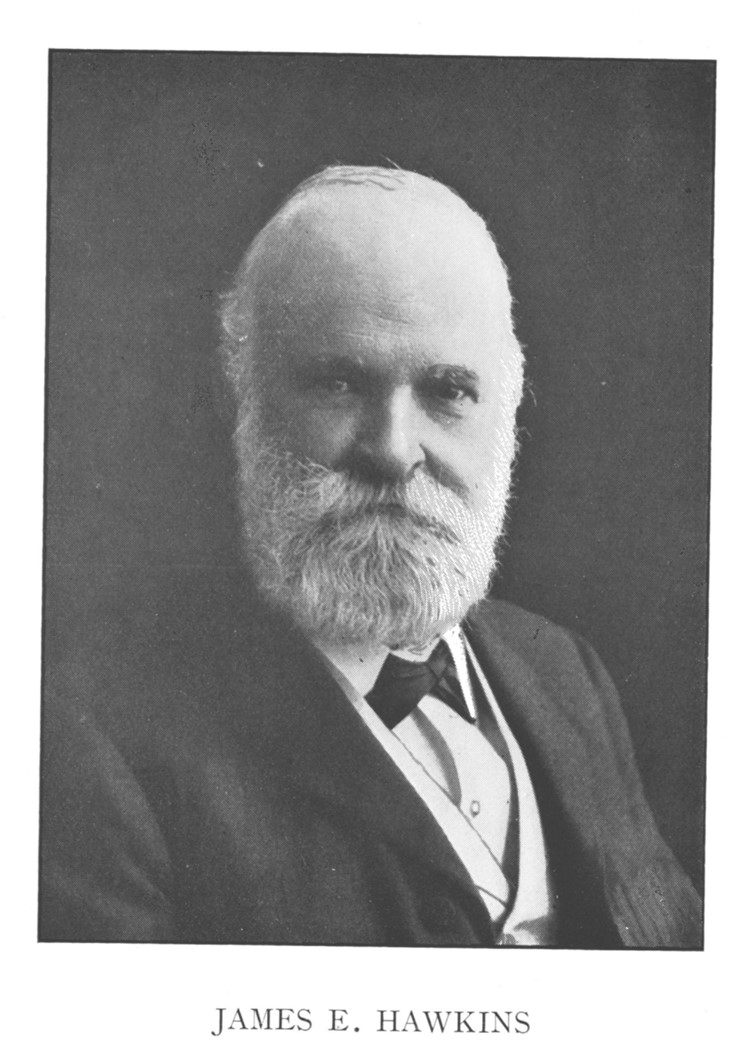 JAMES E. HAWKINS was born in Bitterley, Salop, in 1843. His parents were godly Congregationalists, though afterwards they owned only the true gathering centre, "My Name" (Matt. 18. 20), and built a hall at Orleton, Hampshire, for worship and ministry on Scriptural lines. His first soul concern was induced by hearing an address on "The Lord's Coming," by William Yapp. When 14 years of age George Lawrence, a well-known worker in Britain and Spain, said to him, "James, you are quick at figures, here is a sum for you, 'What shall it profit a man if he shall gain the whole world and lose his own soul ?'" The impression never left him, till four years later, when Mr. Lawrence was preaching in the town he had the joy of pointing the sin-burdened soul to the Lamb of God, closing with 1 John 5. 13. Thus the light dawned on April 5, 1861, and from that day till the end of his course, 57 years after, he rejoiced in the possession of Eternal Life. The '59 Revival spirit, then so prevalent, also left its impress on his long and active career. Following the New Testament order, the young convert and others were baptised in the river flowing by the side of the town on April 28.

On April 30, on the invitation of Wm. Yapp, he left for London to assist in the Book and Tract Depot at 70 Welbeck Street. Afterwards the business was changed to Yapp & Hawkins; the "Clapton," "Iron Room," and other series of booklets being issued at this time. In 1866 he married Clara Elizabeth Hunt, who proved to be a true helpmeet for 47 years, and an indefatigable worker in connection with Golden Grain AImanac.

In 1867 Wm. Yapp retired, and James E. Hawkins carried on a prosperous business in Baker Street and Paternoster Row, for many years. He introduced the "Mild-may Cards" and other famous series. His series of beautiful chromo booklets, including Songs of the Dawn, The Homeward Journey, The Garment of Praise, The Master's Presence, etc., have never been equalled for their chasteness and superb colouring, and may rightly be treasured by their fortunate possessors. Many volumes of Spiritual truth valued to-day first bore the imprint of J. E. Hawkins. Wm. Lincoln's Expositions of Hebrews, John, and Revelation; Arthur Pridham's Expositions of Romans, Ephesians, Philippians, and other books; Denham Smith's Brides of Scripture, Gospel in Hosea, Prophet of Glory, and Papers for the Present Time; D. L. Moody's Wondrous Love, The Great Salvation, etc. ; and many others might be named.

For a number of years Mr. Hawkins acted as London publisher of The Witness, The Golden Lamp (long ago discontinued), Missionary Echo, now issued as Echoes of Service, and other monthlies.

A unique feature which might well be revived in what to visitors is often Lonely London was a monthly drawingroom meeting at 36 Baker Street, which drew together well-known teachers and workers from all parts of the kingdom. Brethren J. G. M'Vicker, T. B. Miller, R. J. Mahony, F. C. Bland, John Hambleton, Harry Moorhouse, Dr. Neatby, Lord Carrick, and others, whose names are revered, frequently took part. The meetings were times of refreshing from on high.

As an AUTHOR, Mr. Hawkins produced "Short Papers on Prophecy" and "Lectures on the Tabernacle," both of which sold extensively, and were helpful to young Christians. Also many smaller booklets, including "The Blood of the Lamb," which circulated by thousands, and was used to many conversions.

As an EDITOR, he commenced The Gospel Watchman, a penny Gospel Magazine, in 1869, and continued it, with varying circulation, till 1895. His best known work is the Golden Grain Diary, which he brought out in 1868. It reached a circulation of 20,000 the first year, has attained to 70,000 some years, and is better known and valued to-day than ever before. Messrs. Pickering & Inglis acquired the rights a few years before his death, and continue to issue on the same lines as Mr. Hawkins did successfully for over 50 years.

As a POET he produced both hymns and spiritual songs of no mean order. Had he had no other gifts he might well have been remembered by the initials J.E.H. after many a sweet and cheering verse.

As a SPEAKER, Mr. Hawkins had considerable gift, and for 60 years his voice was heard in many parts of the country. He took the Oxford Music Hall, London, and had as helper, John Hambleton, "the converted actor. " Great blessing resulted. His last service was at Ickenham, three months before his Home-call.

Many trials in business beset him in later years, but he kept to the old lines, and his forte in the selection of texts, arrangement of verses and chaste get-up of booklets, continued unabated for more than half a century. He passed quietly away on Sunday afternoon, December 22, 1918, and was laid to rest at Harrow, awaiting the time when from the Righteous Judge "each man shall have his praise from God" (1 Cor. 4. 4, 5, R.V.).

As "members of Christ and stewards of the mysteries of God" (v. 1), may we seek grace to commence well, continue well, and conclude well, whether our allotted span be brief or prolonged.