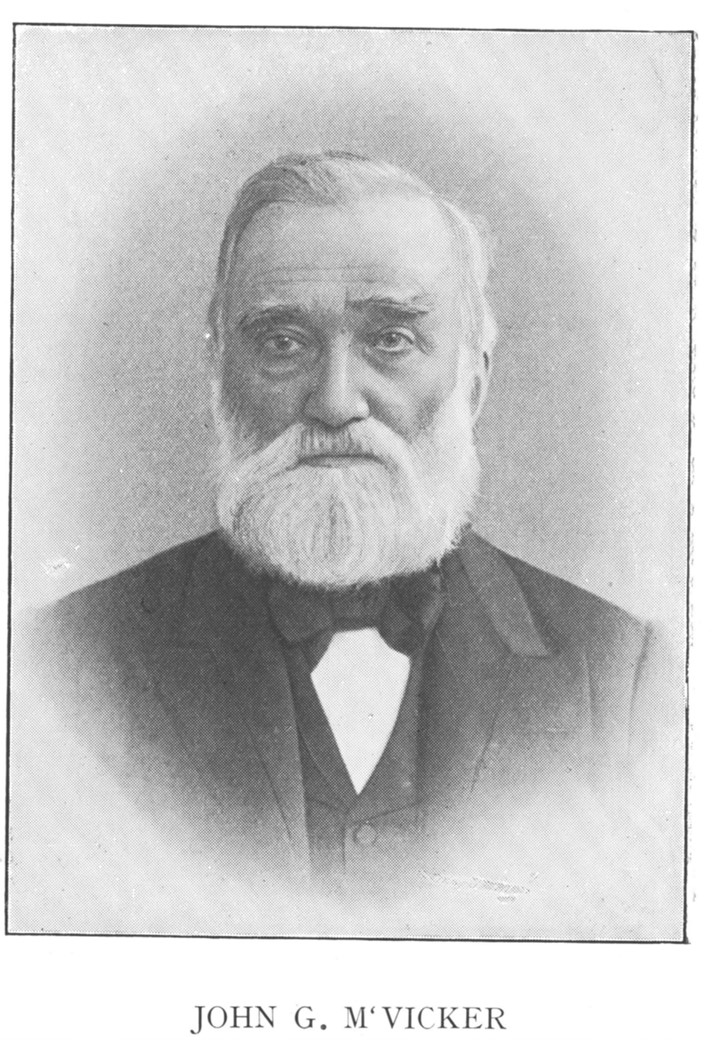 JOHN G. M'VICKER was born in Belfast on 15th March, 1826, and died in London on 5th January, 1900, at the age of 73. For more than forty of those years he knew that God was his salvation, and in that knowledge he served Him—chiefly, at first, in the North of Ireland, and later in London. He was in his early years a Presbyterian minister. Having ceased to be so, he continued until the end, disclaiming any denominational name, to teach and preach Jesus Christ.

It was during the awakening of 1859 that he was brought into the light which lightened him during all his after days. A man so living as he was, so large of heart and so sympathetic, could not, and did not, fail to suffer. For suffering he had a great capacity, and his trials were many. God "acquaints His comforters with grief," and Mr. M'Vicker was one who, having suffered, could, deeply feeling, console those needing comfort. They are very many, and they are everywhere to be found.

He loved Scotland, and often visited this country. Who that has heard him speak in the meetings in Glasgow, or, perhaps especially, heard him pray, will forget him? He spoke once on, "Sirs, be of good cheer, for I believe God, that it shall be even as it was told me " (Acts 27. 25). Let that stand as expressive of the man and of his ministry. "I believe God." Certainly he did that; it was his characteristic, personally. "Be of good cheer... it shall be even as it was told me." Such was the tenor of his ministry. "Be comforted; not one word shall fail, for the guarantee of fulfilment is the character of God."

He was preaching in Clapton Hall, Stoke Newington, during December, and brought his service to a close there at the end of the month. On Sunday morning, 31st December, he gave out the hymn of which the first verse is:

"Away with our sorrow and fear,
We soon shall have entered our Home;
The City of saints shall appear,
The day of eternity come."

On Friday, 5th January following, he was occupied in visiting during the afternoon, went home, and after tea retired to his room. There, suddenly, at about eight o' clock in the evening, the end came and he fell asleep.

He was of a strong frame, not tall, but compactly built and solid. He had been black-haired and black-bearded when young; latterly his hair was iron-grey and his beard white; eyebrows bushy, over large, dark eyes. The face, when in repose, had a sad look, as the countenance of one who had known pain and sorrow. His heart was of the warmest and most capacious. There the flame glowed continually. He had a most hearty appreciation of what was good, or beautiful, or well said. A brief, hearty laugh would break from him when he was pleased, which was not seldom. He was of a strong intellect, and adequately furnished by education. He had read considerably, within certain limits, his range in that field being restricted by the fear of God. In thinking he was exact, and in expression accurate. His mental processes might be called severe. There was no slovenliness about him. His attire was plain, and his handwriting was, to the end, of a clerkly neatness and clearness. God was in all this thoughts; the rock of his strength and his refuge was in God. The Word of God, continually meditated upon, fed him, and by constant recourse to God in prayer his strength was continually renewed.

The loving are the beloved, and such was Mr. M'Vicker. God's grace is manifold, and it is bestowed upon many. We shall see other gracious and gifted men, but those who knew him will agree in saying that we shall not see one exactly his like again. They will also agree that, if poorer by his loss, they are lastingly enriched in the memory of what, through grace, he was.

The account in Chief Men... may be by Alexander Stewart.  It is unusual in giving many physical details, colour of his hair, bushy eyebrows etc..but tells us little of his conversion, baptism and deposition from the Presbyterian ministry.  Tim Grass, in a passage, typically packed with detail, is much more informative (Gathered to his name 2006 p. 143

The Selected Letters and brief memoir (published by Echoes of Service in 1902) was (if the preface is anything to go by) the work of a younger  converted Jew, Max Reich [1867-1945,  originally Isaac Ben Abraham Tugendreich]​​​ who was involved with Open Brethren, under the tutelage of M'Vicker, before moving in the direction of the Quakers. For details see the biographical note on the website of Wheaton College Archves where Reich's papers are preserved [https://archon.wheaton.edu/index.php?p=collections/findingaid&id=55&q=&rootcontentid=12752]  Incidentally M'Vicker's second name was Galway.  Timothy Stunt