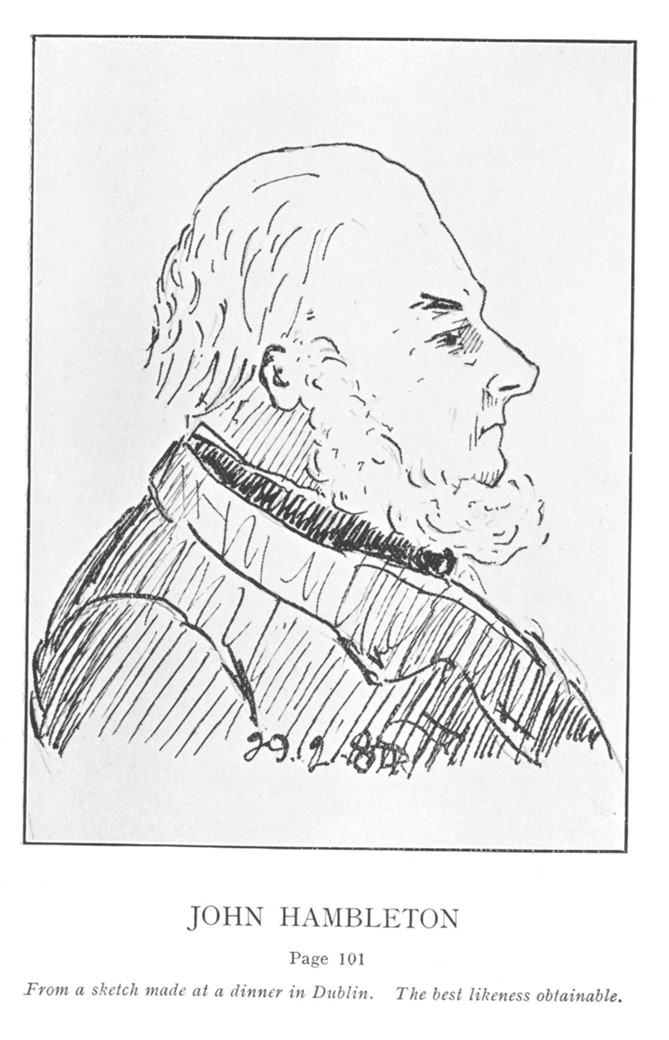 I was also told, "He has a very interesting biography, with components of the story scattered across different publications, but never collected up properly. He had a particularly adventuresome and lurid pre-conversion past --he was a talented actor and ran a theatre company in California, the first proper theatre company in San Francisco, and there are stories about him in the historical thespian literature of California. e.g. his wife complained to other actors that he'd been beating her, and  fell in love with another actor which made Hambleton even worse. Shortly afterwards his wife took her own life with cyanide."

Amongst gifted evangelists whom God has raised up during the last forty years are the names of three remarkable and unique men, viz., Richard Weaver, Henry Moorhouse, and John Hambleton. The trio were well known to each other, and frequently laboured together—especially in their earlier days of service—in various parts of the great harvest-field. God greatly owned and blessed their labours, and it is not too much to say that thousands of sinners were saved, and thousands of saints were helped, through their ministry. During the first twenty years of Richard Weaver's preaching he was more used in conversions than any modern preacher. Mr. D. L. Moody was never ashamed to tell of the blessing he received through Harry Moorhouse's first visit to Chicago. Hambleton was not so well known as Weaver
or Moorhouse, but in his own line of things he was none the less gifted. These three servants of Christ signally illustrate the truth of Romans 12. 6: "Having then gifts differing."

JOHN HAMBLETON was born and brought up in Liverpool. He had the unspeakable advantage of a godly mother, who early taught him to reverence the sacred Scriptures. His mother lived what she taught, and her consistent, Christ-like life was one of the links in the chain of his conversion. When a mere lad he disobeyed his mother, was drawn into sin and vice through evil companions, and, at the age of sixteen, ran away from home and entered the theatrical profession. For sixteen years he travelled in Australia and America as an actor, theatrical manager, adventurer, and gold digger. Though mixing with infidels and scoffers, and hearing their objections to, and tirades against, the Bible, he never doubted that the Scriptures were God's revelation to man. "In my own heart, " he wrote, "I believed every doctrine of the Christian faith, though I was a rejecter of Christ and a neglecter of God's great salvation."

When the news of the discovery of gold in California reached him, he determined to leave Australia and go to the diggings. After reaching San Francisco, he set out for the gold-fields. When in California he had many narrow escapes from death. Once his grave was dug, his companions thinking that his end had come. As he lay under a tree at the point of death, he became thoroughly aroused to a sense of his guilt and danger. Writing of that solemn occasion, he said: "As I lay upon that grassy couch, apparently upon the eve of death, my soul trembled as conscience suggested the question, 'Where will you go when the end comes?' Then the scenes of my past life rushed with fearful imagery through my mind. I thought of the home I had deserted, of my mother's heart I had broken, the talents I had abused, the grace of God which I had despised and rejected. And then I thought of the just retribution of the wicked and of the awful eternity, when impenitent sinners such as myself shall reap 'for ever and ever' what they have sown in time."

One would think that on recovering from such an illness he would become a new creature. Alas! it was not so. Through a singular coincidence he determined to return to the Old Country. After an absence of seventeen years from England, he landed in Liverpool on April 1st, 1857, and at once went in quest of his relations. After a good deal of difficulty he found his sisters, his mother having died some years previously. Before her departure to be with Christ she asked her daughter to take a sheet of paper and write upon it a declaration of her faith, viz., that God would save her son John and bring him back to Liverpool, that he might become a Gospel preacher! He began to try and be "religious, " but found it to be a very toilsome affair.

On obtaining peace with God he longed to be the means of winning souls to Christ, and began to witness for Him in the open air. After he had served an apprenticeship in open air work, he and Edward Usher hired the Teutonic Hall for Gospel services. A very blessed work was done there, hundreds of persons professing conversion. Eventually he and a fellow-labourer, with a shilling between them, went out in the Name of the Lord to herald the message of mercy in the large towns of Lancashire. In simple dependence upon God, unsent by sect, society, committee, or party, they went forth to preach Christ to the perishing. Henry Moorehouse afterwards joined Hambleton, and they visited fairs, races, shows, etc., distributing tracts and proclaiming to the masses ruin by the fall, redemption by the blood, and regeneration by the Holy Spirit.

John Hambleton was indeed a "burning and shining light, " and during the forty years of his Christian career he lived for God and eternity. He was indeed a bold and fearless ambassador of Christ, who sought to be guided solely by the Scriptures, and was willing to do God's will at all costs. Whilst faithful in carrying out what he saw in the Word of God, he did not make his light a standard of Christian fellowship. He loved all God's people, and could honestly say, "We know that we have passed from death unto life, because we love the brethren. " It might be said of him as of John Knox: "He feared not the face of man, " and refused to be led by any party or sect. Possessed of a magnificent voice, great command of language, and readiness of speech, he excelled as an open-air preacher.

When preaching at a race-course, a number of "lewd fellows of the baser sort, " led on by a Romanist, gave him great trouble. Hambleton told the ringleader that he would allow him to speak if he would answer one question. Persuaded by his comrades to accept the invitation, he stepped on the platform, whereupon Hambleton asked, in solemn tones: "Why did Cain murder his brother Abel ? " There was something in the question that laid hold of the man, for he rushed from the platform a convicted sinner, and the questioner was enabled to expound to the audience salvation through the precious Blood of Christ.

When preaching at a fair, some show-people, who rightly thought that their craft was endangered by the preaching and the praying, sent their clown, with painted face, and dressed up in fantastic attire, to ridicule the work, and give away their handbills. Hambleton, every ready, shouted, "Look here, friends, and you will see two fools, one for the Devil and the other for Christ. God made man in His own image, but look at that poor fellow there and see what Satan has done for him. By God's grace I am a free and a happy man, serving a good Master, but that poor man is only serving the Devil, and will only get the wages of sin, which is death. Yet the God he mocks sent His only Son to die on the Cross to save sinners from eternal punishment, and I am here to declare the glad tidings that there is 'forgiveness of sin' for all who believe in His most blessed Name. " The clown hurried away from the scene of his confusion, but, later on in the day, sought an interview with the "converted actor, " and asked him to pray for him, declaring that he was miserable and wretched in his quiet moments.

For thirty years Hambleton laboured throughout England, Scotland, and Ireland, in the open air, in tents, halls, chapels, theatres, circuses, etc. For a time he also engaged in Bible carriage work, as well as lecturing throughout the country on a large chart which he called "Ezekiel's Tile". The last ten years of his life was spent in Australia, where he toiled on until he obtained his Home-call on December 8th, 1889, aged 69 years.