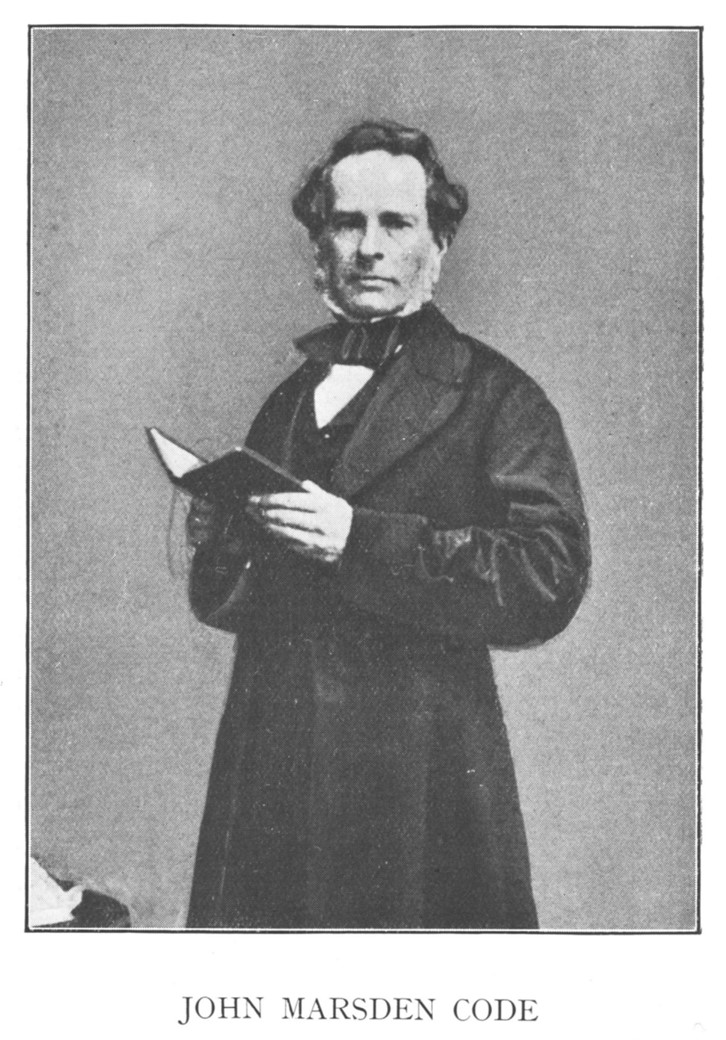 JOHN MARSDEN CODE was born 1805. He was educated at Trinity College, Dublin, took the degree of M.A., and was ordained a clergyman of the Church of England, but soon withdrew for conscientious reasons. He had a curacy at Westfort, Co. Mayo, and is mentioned in the life of the Archbishop of Tuam as having resigned and joined the Brethren.

It was about that time that J. N. Darby, C. Hargrove, and others left the Established Church. Mr, Code never joined with J.N.D. in his Exclusive views, though he was much attached to him personally. He was with the Brethren at Cork, and ministered there. Later he left
Ireland and settled in Bath with his family, and remained there till his death; and there he ministered with much acceptance for many years.

He was a great Bible student and deeply taught in the Scriptures. His preaching the Gospel on Lord's Day evening was very impressive and much appreciated by members of the Church of England who regularly attended the meetings in large numbers. He was entirely possessed by the love of God, and though never forgetting the hatefulness of sin, used to say very often: "God-hates sin, and loves the sinner."

He had only one idea in life — CHRIST! — and it was the same in his home, where he frequently burst out in some beautiful spiritual expression.

One who knew him most intimately writes: "I have never known any one more utterly possessed and permeated by Christ his Saviour. "Like so many of the gifted men given by the Lord to the Church in these times, Mr. Code was equally facile with his pen, and his "Notes on Romans" are veritable gems. He was a frequent speaker at the various conferences, and his presence and ministry of the Word at the believers' meetings in Dublin were always hailed with thankfulness to the Lord.

He had ever desired, if the Lord should call him home before His return, to be taken suddenly, and the Lord granted his wish, for at 4 o'clock on 16th April, 1873, he quietly and quickly fell asleep in Jesus, aged 68. There was no sense of death—no pain, no farewell word. He did not seem to die. Life seemed as if simply suspended here, to be resumed in Paradise. The last words of Scripture he repeated were: "For so He giveth His beloved sleep." He was greatly beloved and much mourned.