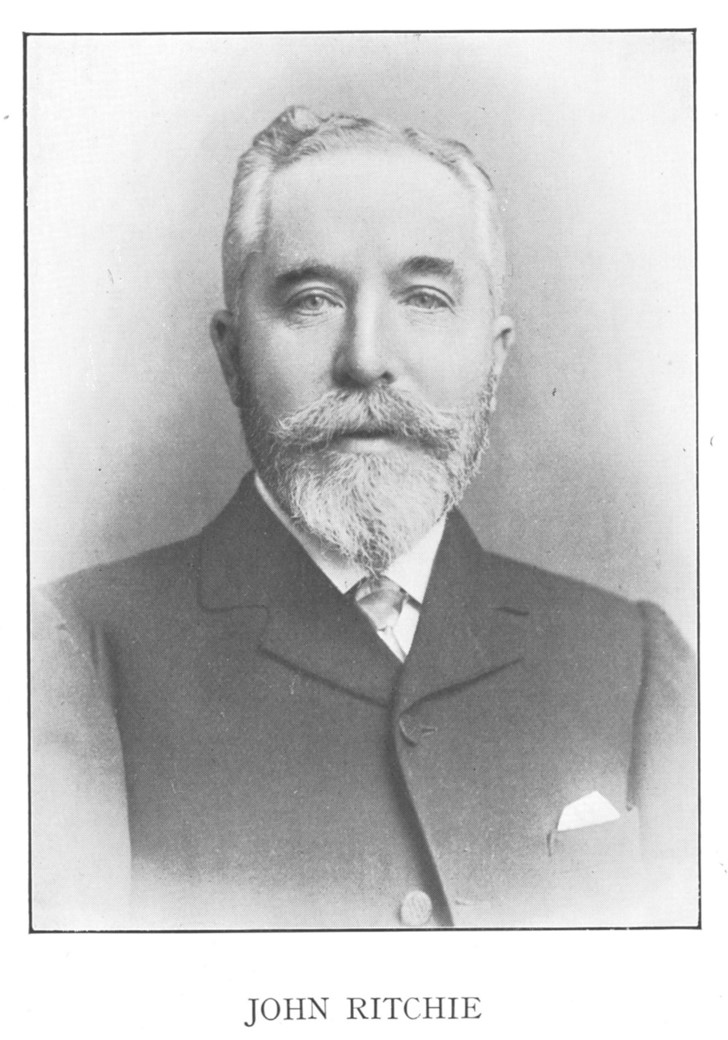 JOHN RITCHIE, for 37 years the Editor of The Believer's Magazine, was born in the village of Old Meldrum, Aberdeenshire, on September 10th, 1853; he had in his personality a good deal of the "granite" for which his native county is famous.

As a lad he had the advantage of sitting under the ministry of a good man, Mr. Geo. Garrioch of the Free Church of Scotland, who often visited his home, and talked with him of the necessity of "the new birth. " A young doctor, Dr. Robert M'Killiam, well known in later years in London as the Editor of The Morning Star, and an able teacher of the Scriptures, who had recently begun to practice in the village, and who cared for the souls as well as the bodies of his patients, had taken up a Sunday School Class in connection with the church, and among the scholars who were deeply impressed by his earnest words was "J. R."

Teacher and scholar met fully forty years after these early days at a meeting in Devonshire House, London; this time the "scholar" gave the address and the "teacher" closed the meeting with prayer and thanksgiving. Needless to say it was a happy re-union.

In the years 1859-60 there came the memorable Revival, which swept over Scotland like a mighty flood, carrying thousands into the Kingdom of God. One result of that movement of Divine grace was the raising up of a band of lay preachers and evangelists drawn from various walks in life. Some were landowners, like Hay MacDowall Grant, the laird of Arndilly; some were working men, like Duncan Matheson and James Turner, but all alike fired with Gospel zeal and love for perishing souls. Under the preaching of these men and their immediate successors, the "dry bones" of Scottish Presbyterianism began to shake.

In 1871 Donald Munro and others had meetings in the town of Inverurie, Aberdeenshire, where Mr. Ritchie was then employed. Tremendous opposition was encountered; personal violence was attempted on the preachers, but the Spirit of God was working mightily, and in one week twenty or more young men and women confessed faith in Christ, including "J. R.," who never hesitated to avow his spiritual birthday as April 2nd, 1871.

After the departure of the evangelists, the young converts, who failed to find food for the new life begotten within them, in the ministrations from the pulpit, used to meet together for prayer and study of the Scriptures, and gradually came to see that the teaching and practices of the early believers as revealed in the Acts and the Epistles was the path they should follow. Hearing that special meetings were being conducted by Donald Ross and others in the adjacent village of Old Rayne, and that believers were there meeting to remember the Lord according to the pattern in the Book, a number of the young Christians walked over on a Lord's Day morning, and for the first time saw the observance of the Lord's Supper in its original simplicity.

They were "convinced of all" (1 Cor. 14. 24), and not long afterwards they, too, publicly obeyed the Lord in baptism, and commenced meeting to show forth His death.

It soon became evident that the young grocer's assistant was endowed by the Holy Spirit, with the gift of the evangelist. Beginning in a quiet way to open his mouth in testimony for his Lord at kitchen meetings, in barns, and in joiner's shops, fitted out as meeting places, he "increased the more in strength" (Acts 9. 22), until his gift made room for him in wider spheres. His avidity for the Word of God, his wonderfully retentive memory, his fluent and flaming appeals to the consciences of his hearers, his indomitable zeal in the service of his Master, combined to mark him out as "a vessel unto honour. " Soon the claims of spiritual work necessitated the abandonment of his material duties, and with the benediction of his brethren he gave himself entirely to the Lord's work.

In June, 1877, he was united in marriage to Miss Liveston, of Forfar, in the house of a mutual friend, in the town of Kirriemuir, finding in her a true "helpmeet" for forty-six and a half years of married life. Her Home-call in March, 1924, was a severe blow from which he never fully recovered. The young couple set up their first home in the village of Dalmellington, Ayrshire, where Mr. Ritchie had been in the midst of a gracious work of God, and where over 60 young believers required his care.

From thence, in 1879, the home was moved to Kilmarnock, where a great ingathering of souls had taken place under the preaching of Rice T. Hopkins and Alex. Marshall, and where it was felt his help would be invaluable. Here also he found a convenient centre for his activities in
preaching the Gospel, and also in ministering the Word to believers — another gift which now came into prominence.

Here, too, in Kilmarnock, there came into use the "pen of a ready writer, " which was destined to carry his ministry to almost every part of the world. From the little home in Kilmarnock, The Young Watchman appeared 47 years ago. These were the days when the Editor acted as his own clerk and packer, while one of the rooms of the house was converted into a temporary despatch room; and where on the day of issue another very young "watchman" (the present writer) supervised, as he thought, the processes of wrapping up, addressing, and stamping the various parcels of literature. Then followed The Sunday School Worker's Magazine, The Little Ones' Treasury, The Believer's Magazine, with others still later, and all the while in Scotland, England, Ireland and Wales, the ministry of the living voice, fraught with so much blesssing to many souls, was continuing. The results of this prolific and world-wide ministry the Day of Christ alone will declare.

"Of making many books there is no end" (Eccles. 12. 12), the wise man said, and certainly the adage seems to be true of Mr. Ritchie. In his fertile mind, guided by the Spirit of God, one after another they were begotten in rapid succession. Pithy, pungent, and powerful in their appeal to the hearts of God's people; simple in diction, spiritual in tone, steadfast in their adherence to Holy Writ, suited especially to the needs of young believers, these earlier books such as "The Tabernacle," "Egypt to Canaan," "Foundation Truths, " have run into many editions, and some of them have recently been translated into Continental languages. Over 200 volumes and booklets, besides hundreds of tracts have come from his pen.

In the years of young manhood the preaching of the Gospel was his forte, and there were few who excelled him in holding the attention of an audience by his incisive presentation of the foundation truths of the faith, illuminated as his addresses were by striking phrase, illustrated by telling incidents, interspersed by frequent flashes of homely humour yet always thrusting for the consciences of his hearers. "J.R. " was a born organizer, and had the happy knack of inspiring courage and confidence in young men, who had a heart for the service of the Lord.

The summer work in the villages, which for several successive summers he organised, and in which he got young men on holiday to join him, resulted in systematic house-to-house visitation, and open-air campaigns in the counties of Ayr, Stirling, Dumfries, Wigtown, Cumberland, and elsewhere. Fred. S. Arnot and Chas. A. Swan of African fame, and James Imrie, of Glasgow, were among the early helpers in this fruitful work.

In the active years of middle life, when he felt called to give himself more closely to the rapidly increasing work of writing and publishing, he yet gave freely of his time in ministering to the people of God. In his home assembly at Kilmarnock he was for many years the acknowledged and trusted leader, and some of his Sunday Afternoon Addresses, as well as week night Bible Readings for young believers, will be remembered with a thrilling and thankful joy by many of us while life shall last. Far afield, too, he travelled in response to urgent invitations from various parts of the country; a conference here, a series of meetings there, oftentimes taxing his physical and mental powers to the uttermost.

As life passed the meridian he was compelled to go slower. "The books and especially the parchments" (2 Tim. 4. 13) claimed his chief attention, and long after the day's work should have been done, he burned "the midnight oil" to light the lamp of truth in others.

With a sigh, as of relief, at his escape from "the last weariness—the final strife," he quite unexpectedly passed swiftly over "to the other side " on the afternoon of March, 19th, 1930, and is now "at home" with the Lord.

In a shaded corner of the cemetery at Troon, we laid the tired and weary body to rest beside that of the devoted lifepartner until "the Morning. " In the words of the hymn he loved so well, and which he so often asked us to sing on the quiet of a Sunday evening in the old home we say:

"For ever with the Lord
Amen! so let it be."

Findmygrave has a transcription of the memorial, but no pictures,
https://www.findagrave.com/memorial/184706011/john-ritchie

JEANIE LINDSAY LIVESTON
Beloved Wife of JOHN RITCHIE
Craigie, Troon
Who Entered on Her Rest With Christ
March 9th 1924
FRED, Their Fourth Son
Who Was Drowned While Bathing in
South Africa March 20th 1919
And is Buried in Benoni Cemetery
And of
JOHN RITCHIE
Publisher, Kilmarnock
Who Pass To His Rest on
March 19th 1930 Aged 76 Years
And Elizbeath
Youngest Daughter of Above
JOHN RICHIE
And Wife of DUNCAN McCULLOCH
Troon
Who Died 8th May 1949

Someone has kindly added a picture of the grave now;