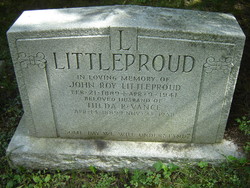 TORONTO, ONTARIO. Our dear brother J. R. Littleproud was called home on April 9, [1941] Since January 17, he had been confined to his bed in the Brantford hospital as a result of an automobile accident. The end came very unexpectedly as a result of heart seizure. It was our brother's great longing to be “at home" for the easter conference, which desire was granted, but it was “at home with the Lord."
For many years, Mr. Littleproud gave all his spare time to the Lord's work. His work as a Bank Inspector took him into nearly every part of the province, and his visits were timed so as to allow him to give help at the regular week night meetings in many a small meeting in Ontario. He was a faithful Shepherd in the Swanwick assembly in Toronto and will be greatly missed by all in this assembly.
For years, our brother conducted a Young Men's Bible Class on Saturday nights in the Central Hall. This meeting was attended by young men from practically every assembly in Toronto, some of whom are now deeply exercised about devoting their time to the Lord's work. But perhaps our brother is best known for his activity in connection with Sunday School work. Besides regular participation in the local and Ontario conferences, our brother has ministered to Sunday School Teachers in Detroit, Grand Rapids, Chicago, New Bedford and Vancouver. The published labours of our esteemed brother are a permanent memorial to his consecration and diligence for the Lord, and His people are a witness to what an active man can do for the kingdom of our Lord Jesus Christ. For ten years he was the editor of the Sunday School Teacher's Lesson Manual, and his recent book, "The Christian Assembly" has been a help to many.
The funeral services were held in Central Hall, the large company filling the hall, gallery, ante-rooms and basement, among whom were many of our brother's associates in the banking and educational circles. The funeral services in the hall were shared by our brethren H. G. McEwen, Peter Hynd, and Wm. J. Pell. The services in the funeral home and at the grave were conducted by brother Pell.
A memorial booklet is being prepared in which some of Mr. Littleproud's addresses will be printed as well as general information about our brother's life, labours, illness and funeral service, which will be of interest to all who knew our brother. Copies can be had from the publishers of Assembly Annals.
“Assembly Annals” 1941