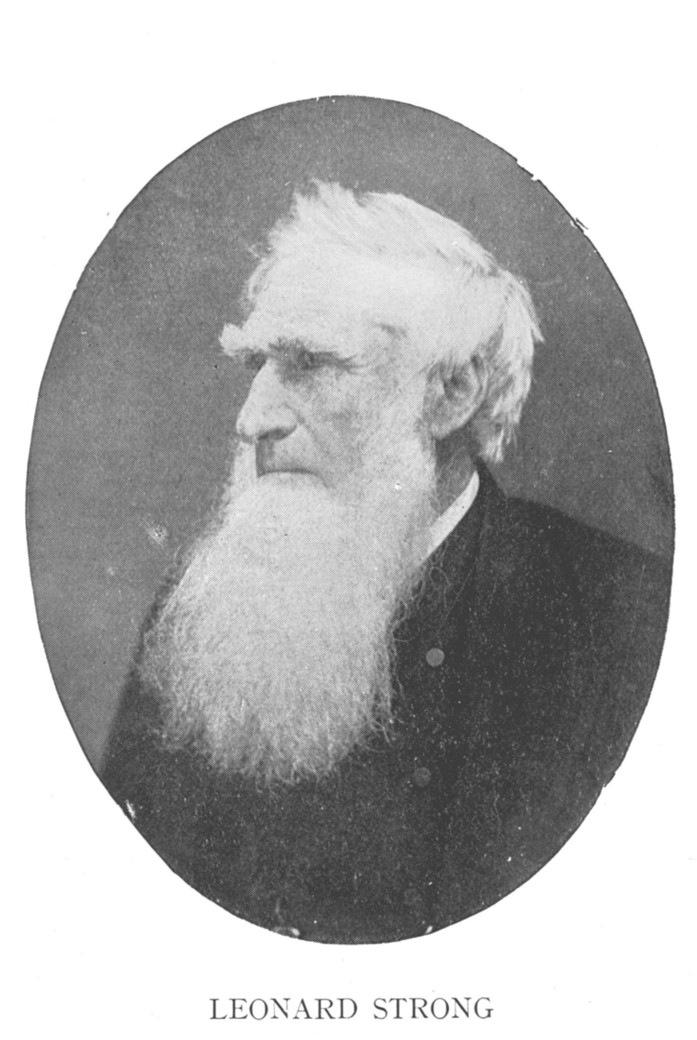 Leonard Strong was born in 1797. His father was Rector of Brampton Abbots, in Herefordshire. He entered the Navy at the age of 12 1/2 years and served as a midshipman in the French and American wars, and was many times in action.

Once when on duty in the West Indies he was all but drowned owing to his shore-going boat upsetting in a squall. This brought his sins before him, and he cried to God for mercy. Being saved, he left the Navy, went to Oxford, where he was converted, and desired to be a missionary. He was ordained in the Church of England as curate of Ross-on-Wye.

But the West Indies called him and he went out to British Guiana in 1826 as Rector of a parish there. His preaching and ministry were greatly blessed, and he devoted himself to work amongst the slaves, braving the wrath of the planters, who threatened to shoot him, and eventually got him removed.

He went to Peter's Hall and Georgetown and began his work again. Meanwhile his diligent and independent study of the Scriptures was teaching him some practical truths as to worship and service that he found impossible to reconcile with his position in the Church of England. Years before Anthony Norris Groves and his friend, Leonard Strong read the same Bible and found the same principles. So he gave up his living, worth £800 a year, and his manse, and met simply for worship amongst his converts, many hundreds of whom followed him. The first meeting was held in a large shed used for drying coffee, about 2000 being present.

Another start was made in Georgetown, and the assemblies continue to the present day. They were "breaking bread" in Georgetown earlier than in Dublin or Plymouth.

Mr. Strong left Demerara for good in 1848 or '49. He settled at Torquay, where his ministry was much valued. He wrote several beautiful tracts and books, including some on prophetical subjects, notably one on "Daniel." He was always a welcome speaker at the meetings held in London and elsewhere on Prophecy.

He was one of the first writers to the well-known missionary periodical of "brethren," the Echoes of Service in Many Lands. The claims of perishing souls in the regions beyond ever had a warm place in his heart. A man of rich gifts and rare grace, he was greatly beloved. He died in London in 1874, aged 77, but was buried in Torquay, where he had lived and laboured so faithfully since leaving the West Indies.

From the Missionary Echo;

"Mr. LEONARD STRONG departed to be with Christ (in London) early on Lord's-day, October 18th, 1874. More than forty-seven years ago he went, as a clergyman, to British Guiana, and in the people of that land where he laboured many years he never ceased to take a deep interest. The tidings of Alfred Gardner's sudden removal affected him much; but he could say, " It is the Lord." Of the sweet savour of Christ left by our brother in the memories of very many here, by his simple, gracious, and faithful testimony, it is needless for us to speak. Full of years and fruit, he rests from his labours. His remains were interred at Torquay, October, 22nd."

Matilda Strong (née Dundas) was Leonard's seond wife and was eight or nine years younger than her husband. In her last years she was living in the Kensington household of her son Robert, a solicitor with a degree (B.A.) from London University.   Timothy Stunt

Page 194 of The Elusive Quest (viewed in the Google book preview version), includes “In 1840 his [Leonard Strong’s] three older daughters were staying with their grandfather in Brampton Abbotts, from where they travelled to Plymouth to attend a school run by Mrs Harriet Eccles, a respected member of the early Brethren assembly in Plymouth”. From Family Tree software I think the three eldest daughters were Mary Sophia (b. about 1828), Charlotte Elvira (b. 1829) & Caroline Frances (b. 1831). Is that correct? I know that Jewish girl Miriam Joseph was also a student at Harriet’s school. Is anything further known about the school? My interest is that Harriet Eccles is my great great grandmother (through her daughter Catherine's marriage to Henry Young). As you may know, Henry & Catherine Young emigrated to Nelson, NZ in 1852. Were there Brethren assemblies already in that district then?
Tuesday, Jan 21, 2020 : 10:28
Tmothy Stunt said ...
In 'The Elusive Quest' I indicated in the footnotes my sources for Harriet Eccles. David Rawson's 'Barton Hall, Hereford' in the 'Brethren Historical Review' vii (2011) pp.54-55 contains a letter from Elisabeth Wilson who is also a descendant of Catherine (née Eccles) and Henry Young. More recently (2013) Stuart Braga has published privately in Australia a splendid piece of research entitled 'All His Benefits: the Young and Deck family in Australia', which mentions the Eccles family (p.26). I passed my copy to the Christian Brethren Archive in the John Rylands University Library, in Manchester but I think Braga's book would give you some details of the Nelson settlement. Peter Lineham in his 'There we found Brethren: A History of Assemblies of Brethren in New Zealand' (Palmerston North 1977) suggests that the Youngs and the Decks were the first Brethren settlers in NZ. (see pp.14-15) You can also find details of Mrs Eccles' teachers and pupils (some fifteen of them including the Strong sisters) in the Census returns for 1841 (Princess Square, Plymouth). Timothy Stunt
Wednesday, Jan 22, 2020 : 06:30
DY said ...
Thanks Timothy … very helpful information! I have Stuart Braga’s book, having contributed two essays to it myself. Peter Lineham’s book sounds interesting .. I will hunt for that book. Thanks again.
Monday, Jan 27, 2020 : 06:20
Anne McFadgen said ...
Re DY's query about Brethren assemblies in NZ pre-1852 - the answer is no. It wasn't till a bit later, after Henry Young's good friend from East India Coy days and fellow member of the Plymouth Brethren, James George Deck, arrived in Nelson in 1854, that the Brethren movement had its beginnings in NZ. Deck settled with his family in the Waiwhero Valley on the outskirts of Motueka, a small town near Nelson, and Henry Young and his family then moved from Nelson to Motueka to be near them (note that Henry Young's daughter Emily, who attended a private school for girls run by J.G. Deck's daughter Mary at her Waiwhero home, later married Deck's son, John Feild Deck). Both men promoted the Brethren cause around the Nelson area - Deck travelled extensively, preaching informally at private homes. One household in particular, that of William Nice in Motueka, was a regular venue by 1860. However, an all-day meeting held at J.G. Deck's Waiwhero farm on New Year's Day 1862/3, is regarded as the first Brethren assembly to take place in New Zealand,
Monday, Feb 3, 2020 : 07:39