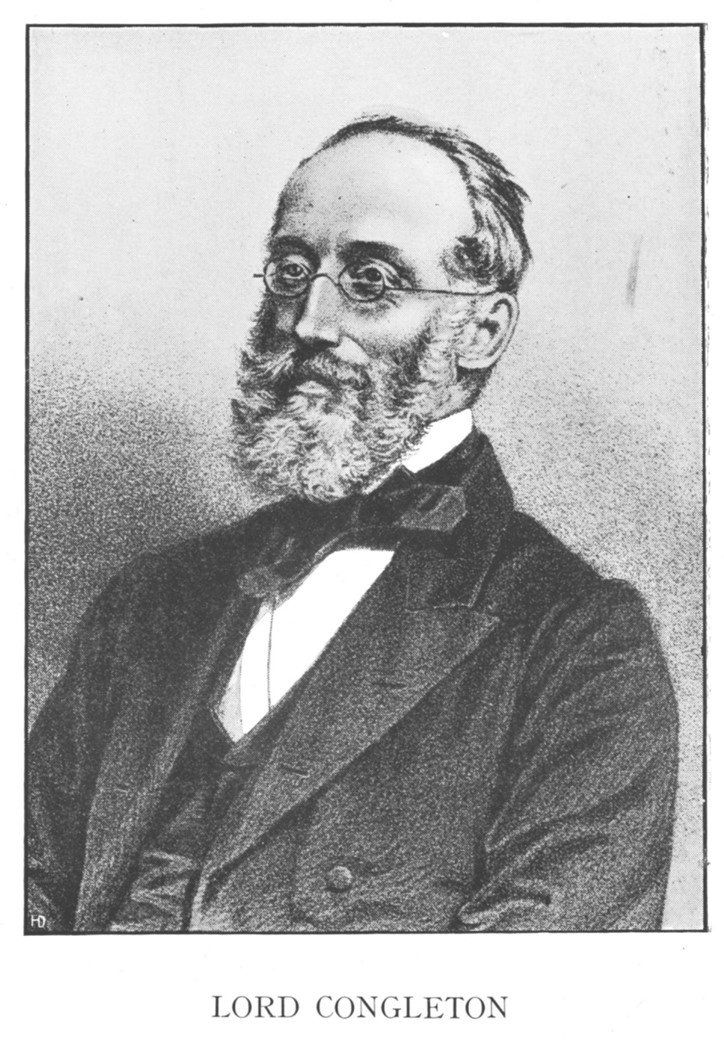 JOHN PARNELL, second Lord Congleton, the eldest son of Baron Congleton, was born in London on June 16th, 1805. When studying at the University of Edinburgh he was led to accept of Christ as his Saviour and Lord. From the day of his conversion he took a decided stand as a Christian among his fellow-students and friends. When asked if he had not to give up much to become a Christian, his characterestic reply was: "Give up! No, I gave up nothing; I got all."

On leaving college his father, wishing him to become a soldier, purchased for him a commission in the army. He could not, however, accede to his father's request, believing that it was not God's will that he should be connected with the military profession.* Soon after this decision of his, a rich uncle left him property the annual value of which was £1200. It is needless to say that principal and interest were consecrated to God

During the years 1827 and 1828 he was a frequent visitor' at an uncle's house in Dublin. Here he became acquainted with the late Anthony Norris Groves, John N. Darby, John G. Bellett, Dr. Cronin, and other devoted and gifted Christians, who were used of God in commencing a remarkable movement for God in the world.

Mr. Henry Groves, Lord-Congleton's biographer, tells us that among the truths that exercised these brethren were— 1st, the oneness of the Church of God, involving a fellowship large enough to embrace all saints and narrow enough to exclude the world; 2nd, the completeness and sufficiency of the written Word in all matters of faith, and pre-eminently in things affecting our Church life and walk; 3rd, the speedy pre-millennial advent of the Lord Jesus.

The first public room where so-called "Brethren" assembled for the breaking of bread was hired by Lord Congleton (then Mr. Parnell), and was situated, not at Plymouth, as is generally believed, but in Aungier Street, Dublin.

On September 18th, 1830, he accompanied a mission party to Bagdad, in Asiatic Turkey, purposing to join Mr. A. N. Groves, who was labouring there. They took with them a great number of books, a printing press, and a large medicine chest. After many rough and painful experiences, as well as hair-breadth escapes, they reached Bagdad on June 27th, 1831. Here they found almost insuperable difficulties placed in their way by the Turkish authorities. Being bigoted Mohammedans, they did their utmost to prevent the truth being spread. After toiling for a time at Bagdad and neighbourhood, Lord Congleton and several others visited India, and finding open doors in that needy land remained for years, preaching the Gospel to the unsaved and teaching the Word to believers.

In the summer of 1837 Lord Congleton left India and returned to England, where for forty-six long years he toiled and laboured until his Home-call. Lord Congleton was a diligent and able Bible student. It was his custom, as it was that of his friend, the late George Miiller, to rise early in the morning, in order that he might have a period of uninterrupted meditation and study of God's Word. To him, as with Jeremiah, the Scriptures were "the joy and rejoicing of his heart." When in poor health he wrote from Cannes as follows: "As to myself, I do not know that I ever was happier. Of late I have been almost daily picking up nuggets of metal, far, far more precious than gold, out of the Holy Scriptures—the Book I have been reading daily for more than fifty years, and it seems to get newer instead of older." He was also a man of prayer. In addition to his early morning hours for prayer and communion with God, he usually retired to his room at eleven in the forenoon, three in the afternoon, and eight in the evening.

He had a great love for the children of God, irrespective of sect or party, and it was a delight to him to be of any service whatever to the humblest, weakest, poorest, or most ignorant of them. He loved believers because they belonged to Christ, and counted it a privilege to help them in any way he possibly could. And this was not done in a patronising way, as it is to be feared is too often the case with some who are in "easier" circumstances than their poorer brethren. He was free from that spirit of caste which so pervades Christian society. Instead of seeking the company of the rich and the great, the refined and educated, he sought the poor and the outcast, the sick and the sorrowing, and ministered to their needs.

He was a self-denying and faithful steward of the money and property entrusted to his care. It was his constant rule to devote one half of his income to the Lord's service. Though glad to carry the Gospel of God's grace—the proclamation of His mercy—into every open door, his special ministry was among believers. He delighted in expounding the Scriptures to God's people. Whilst contending for "open" ministry at the Lord's table, he did not believe in an "any man" ministry. One of his utterances in prayer often was, "May we be willing to sit silent until Thou givest us a word, and ready also to speak when we get a message from Thee."

In a booklet written by him on the "Open Meeting" some important principles are enunciated. "Everything connected with the open meeting calls for the greatest lowliness of mind. Mere sanctified natural ability and educational acquirement in a member of Christ will not suffice to edify His body; and that everybody with any experience knows. A man must have a gift in addition to being a member of Christ in order to be able to edify his fellow-members. And after that he has to wait upon Christ, the Head of the body, his Lord, for guidance as to whether, when the members are all come together into one place, he is to move. It is only the lowly ones that will wait for, or discern, or obey that guidance. And it is only the lowly ones that will submit to the judgment of others."

In the early morning of October 23rd, 1883, Lord Congleton fell asleep. "Lord Jesus, receive my spirit," was often on his lips, and he remarked that that summed up all his desires.

Ernest Bartlett said ...
I have read a tract "Lord Congleton's offer ,which I believe he offered£100 who would come to his office before 12 am, on the said day,only one man came,others came after,but was too late, the author of the tract was making clear the importance of coming to Christ for salvation,and doing it now.
Is this a true statement
Friday, Aug 24, 2018 : 04:26
Tom said ...

Yes I've read that, I think in a periodical somewhere .. having looked on Google it seems to have been retold in a few places, so here is one version I found.

Lord Congleton devised a plan for teaching his tenants how by faith they could receive the forgiveness of sins, but be shut out from the promises of the Gospel through unbelief.

His tenants, some of them years behind in their payment of rent, had reason to be apprehensive that their landlord might take action against them through the ‘Land Court’. To their astonishment, a notice was posted up all over the estate promising remission of rent to any tenant who would meet Lord Congleton in his office at certain stated hours on a certain day. The tenants, suspicious, spent the intervening days trying to find out what plan Lord Congleton had to trick them.

On the appointed day Lord Congleton sat in his office awaiting his tenants’ response to his offer, while they, on their part discussed their landlord’s offer. The hours fixed were the morning hours, ten to twelve o’clock, but it was not till nearly midday that one of the tenants, unavoidably delayed, rushed into the office and claimed the promised remission.

‘Do you really expect your debt to be forgiven?’ asked Lord Congleton.

‘And why do you?’ asked his landlord.

‘Because your lordship has promised.’

‘Because your lordship would not deceive a poor man.’

‘But you are a good man, are you, industrious and hard-wording?’

‘Oh, my lord, your notice said nothing about that.’

‘And so, believing the notice and finding no condition attached, you have come for your receipt?’

Lord Congleton wrote the receipt and handed it to the tenant who waved the paper above his head and shouted, ‘I knew you wouldn’t deceive us. God bless your lordship.’

He was making for the door to show it to his fellow-tenants but Lord Congleton asked him to wait a few minutes till the hour struck, since the promise of remission was to faith, and only to faith, and the specified time ended at twelve noon.

At twelve o’clock he rushed out with the receipt, shouting, ‘I’ve got it. My debt is cancelled.’

Other tenants then rushed to the office but found the door shut. Unbelief had kept them from obtaining cancellation of their debt.