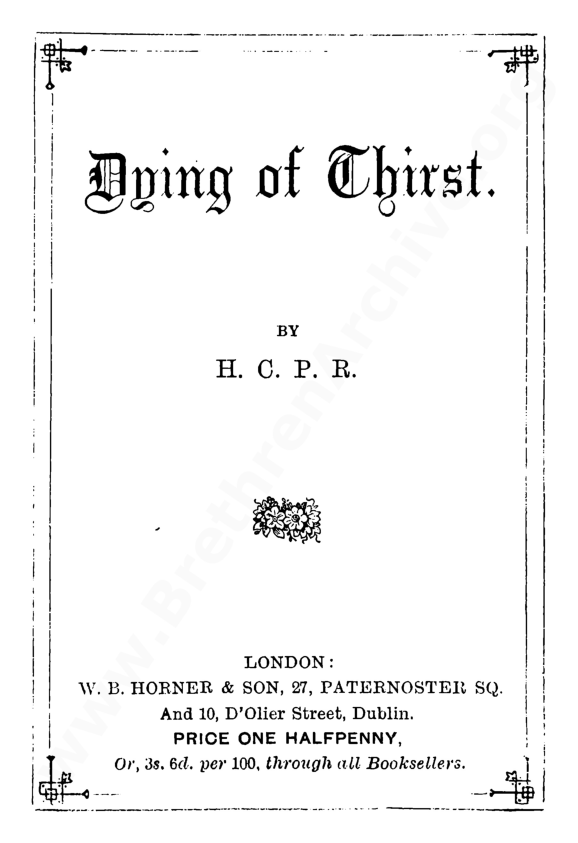 The author is perhaps Major General Harry Chippendale Plunkett Rice (1837-1922), who was born and living in India. In “The Witness” 1894 there is a letter of him (pages 193 and 194) in which he wrote about an assembly in Rangoon (today: Yangon) in Burma (Myanmar) and signed as “H. C. P. R.”. In the index of “The Witness” the name is given as “H. C. P. Rice”. In a booklet about Waterloo Hall in Weston-super-Mare Rice with his full name is said to have been a Trustee in 1889. A google-search will bring out more details about him.

It was in the home of Major General Harry Rice in British Columbia, that the Brethren met in the early 20th century. Fuller details of his life and family will be found in my article 'Some late 19th century military Brethren,' (forthcoming in the Brethren Historical Review.) Rice was vividly recalled in later years by a Canadian, Professor Roy Daniells: 'After the breaking of bread service, he [General Rice] would burn what remained in the fire; he did so, he told me one Sunday, because of what God commanded in Leviticus concerning the offering made by the priests. His military sons and their children in turn were all handsome, aristocratic in manner, and devoted Christians, as though one had crossed officers out of Kipling with archangels. One never knows what an assembly of the Brethren may bring forth. The kingdom of heaven is a strange place and full of surprises.’ (Roy Daniells, ‘Plymouth Brother’ in Canadian Literature 90 [Autumn 1981] 31.)    Timothy Stunt.

Contains the article quoted by Timothy: