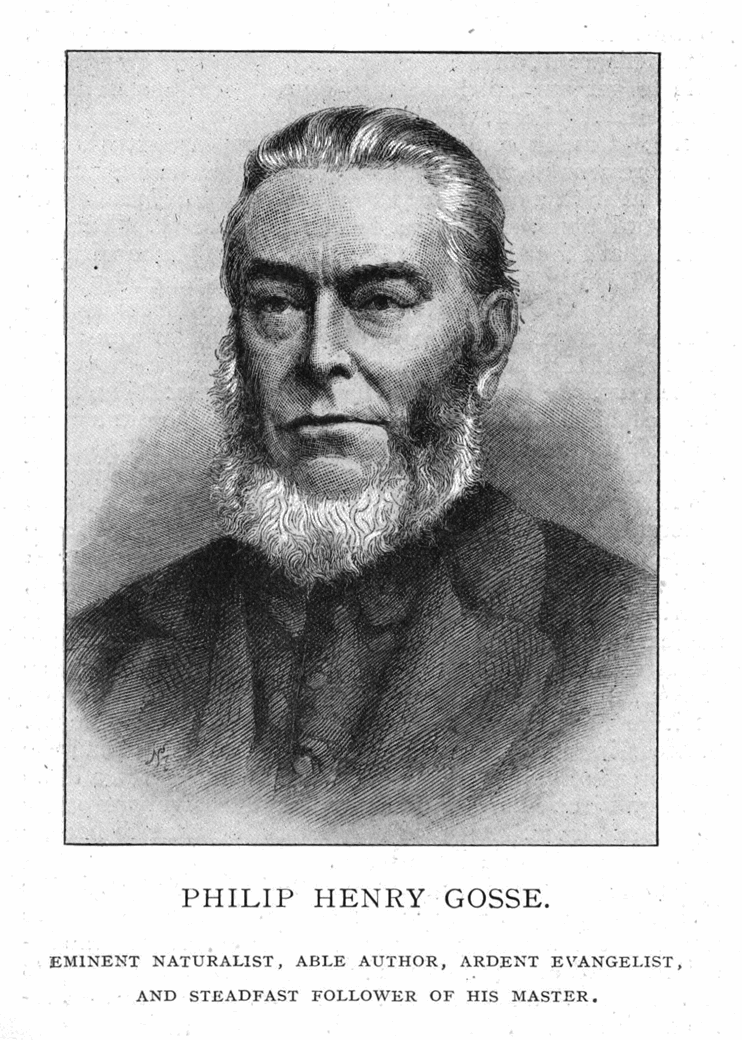 PHILIP HENRY GOSSE was born in Worcester in 1810. His family removed in his early infancy to Poole, Dorset. He seems, when quite a boy, to have given evidence of his taste for natural history, making collections of butterflies and other insects.

In 1827 he went in a mercantile capacity to Newfoundland, and here it was that, after having lived for two or three years according to the lusts of the flesh, he found, or rather was found by, that Saviour who was able to deliver him from the guilt and the power of sin. He was then about nineteen years of age. Being full of zeal, he soon desired to tell others of the salvation which he himself had experienced, and became a Wesleyan local preacher. He had, of course, little experience and still less knowledge at that time, and what he preached was, as he himself expressed it, "poor stuff." Nevertheless, He who "giveth more grace" no doubt accepted his public efforts to witness for Him, and blessed them.

It was in Newfoundland that young Mr. Gosse first began to occupy his leisure hours collecting insects, studying their various forms and transformations, and making drawings of them. After residing in Newfoundland for eight years he visited Lower Canada, and for a time engaged in agricultural pursuits with his brother, still directing his attention to zoology generally, but especially to entomology. He also preached the Gospel as the Lord gave him opportunity. Here he continued for three years, but not finding farming operations remunerative or altogether to his taste, he determined to give all his attention to natural history as a profession and means of livelihood. Leaving Canada, he travelled through the United States, and resided in Alabama, where he collected the materials for his work, "Letters from Alabama on Natural History."

At this period he experienced what he described as a second conversion, and consecrating himself afresh to God, he determined more than ever, by His help, to yield himself up to do His will. A school for boys which he opened -here kept him, in conjunction with his zoological and other studies, fully occupied.

In 1839 he returned to England, and until 1840 was engaged in writing "The Canadian Naturalist," which he published during that year. From that time until 1844 he resided with his father and mother at Hackney, where he fell in with Christian friends who had recently withdrawn from the Church of England. With them he daily studied the Scriptures, and was thus led to dissever his connection with Methodism, and to cast in his lot with those known as "The Brethren." The reading of Habershon 's "Historical Exposition of the Apocalypse" appears to have made a great impression on him in deciding him to adopt ;hose views of the second coming of the Lord which afterwards coloured his whole life to its close.

His mind was thus prepared to receive yet further light, and a few months later he was introduced to a little band of earnest Christians. With them he nightly sat round a table in Well Street, Hackney, and searched the Scriptures. His enthusiasm was great as the grand scheme of God's salvation gradually unfolded itself to him. At the end of the very first meeting he involuntarily burst forth with the exclamation, "I have learned a great truth to-night." Again, shortly afterwards, when discussing the subject of union with Christ, he was enabled to grasp that wondrous truth, and to see something of its full bearings. "Away goes all my Arminianism!" he said. Forty years afterwards he alludes in one of his letters to "those happy evenings," and adds, "those conversations are burned in on my memory."

In 1844 he visited Jamaica in pursuit of his profession as a naturalist and collector of insects. Here he fell in with a Christian brother, with whom he united in holding meetings and preaching the Gospel among the natives when not otherwise occupied. While there his home for two years was the house of the missionary, John Coleman, who with his wife had gathered round them a little church of some fifty or sixty members, mostly negroes. Here he found sympathetic friends and a field for ministerial labour. In 1845 he returned to England, and during the following ten years wrote and published many of his most important works on natural history.

In consequence of Mrs. Gosse's ill-health in 1856 they removed to Torquay, taking a house in the adjoining village of St. Mary Church. Here he pursued his studies in natural history, concentrating his attention chiefly on the living fauna and flora of .the British shores, and on marine zoology. In 1857, during a visit to London for medical treatment, his wife died, and Mr. Gosse afterwards finally returned with his mother and son to St. Mary Church, where he continued to reside until his death. Here he gave himself up entirely to the Lord's work in the ministering of the Word of Life, and gradually gathered together a company of believers, who "continued steadfastly in the apostle's doctrine, and in breaking of bread, and in prayers" (Acts 2. 42) .

Mr. Gosse regularly ministered the Word, with very few breaks, until the end of 1887, and seemed, considering his age, to be in astonishing health and vigour. His last illness, which took the form of cardiac disease, causing great oppression and laboured breathing, appeared to be very irksome and depressing to a man of his active mind and habits. Rarely, if ever, for the last thirty years of his life was he in bed after five o'clock in the morning. Most of his scientific and literary work was accomplished when others were fast asleep; and to be condemned to sit in his arm-chair doing nothing, without the power of fixing his mind on any subject for a minute, was a very great trial to him. Especially did he deplore his inability to ponder, as was his wont, on the Word of God. "I do not seem to be able to get any spiritual sustenance," was his frequent complaint. "Lord, wilt Thou not reveal Thyself specially to me," was his constant prayer. It appeared as though the Lord would show him that his intellect was nothing, and that with a child's mind he was to depart, resting on the Word alone. And here, indeed, he did rest. "Father, I will that they also whom Thou hast given Me be with Me where I am" (John 17. 24), was often repeated by him. Frequently also during the long nights of sleepless discomfort, compelled as he was to sit up in an arm-chair most of the time, would he repeat and sing with a quavering voice favourite hymns. His last words were: "The Lord is here! The Lord is present!" Without sigh or struggle he "fell on sleep."

Philip Henry Gosse proved that a man might live all his life in the service of God, and in. doing so serve his own generation in the best possible way. It is not possible to over-estimate the value of the testimony which he has left behind him. Gifted with an extraordinary intellect, admired as an author, looked up to as an authority on all subjects connected with natural science, having admirable conversational powers, Mr. Gosse might, if he had so chosen, have occupied a very high and distinguished position in worldly society. But he did not so choose. "Esteeming the reproach of Christ greater riches than the treasures in Egypt," he preferred to bury himself in a little country village, and quietly and unobtrusively to serve the Lord Christ . All that he was and all that he had he laid at the feet of the Lord Jesus. Another testimony, most valuable in these days, is the living proof which he has afforded that it is possible to be a man of science and yet to be a devout believer in the inspired Word of God. He believed "all that the prophets have spoken," and could not tolerate any departure therefrom, either in himself or others.

Other books that would be particularly interesting to get;

A Memorial of the Last Days on Earth of Emily Gosse. By her husband
Gosse's Narrative Tracts. [A collection of religious tracts by Emily and Philip Henry Gosse.].
Gosse's Gospel Tracts.
Narrative tracts. By Mr. and Mrs. P. H. Gosse.

The above 4 are all in the British Library, so possible to obtain sometime. There are some other books he wrote on scriptural subjects, e.g. those listed in the cba catalouge.

An advert for the tracts, from https://books.google.co.uk/books?id=8b4IAAAAQAAJ&source=gbs_navlinks_s His personal collection seems to have ended up at Leeds University; https://www.worldcat.org/title/gosse-collection/oclc/85885626

Their hosue is marked with a Blue Plaque;

My essay,'Brethren or Philistine' in BAHN Review ii (2000) 13-16 (accessible at http://www.brethrenhistory.org/qwicsitePro/php/docsview.php?docid=419) provides details of several works (especially essays by Robert Boyd and Douglas Wertheimer) that established, over forty years ago, how inaccurate are some of the details in Edmund Gosse's Father and Son which certainly is a brilliant and entertaining piece of writing.   I agree with Tom that it is a 'real must read' but it needs to be used with caution as a source of information about Brethren.  Timothy Stunt