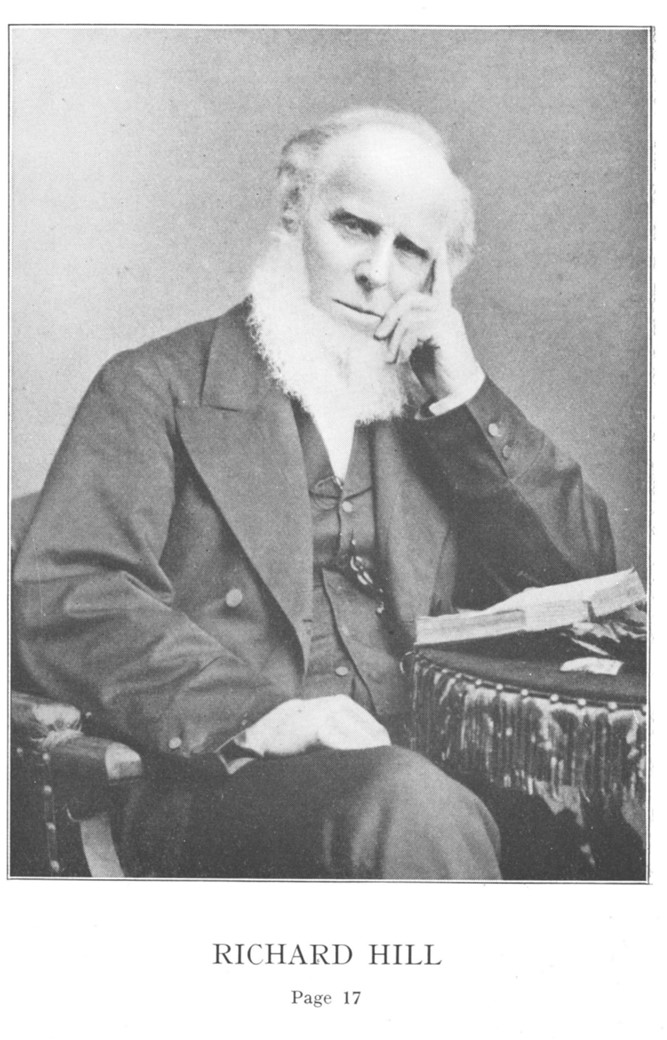 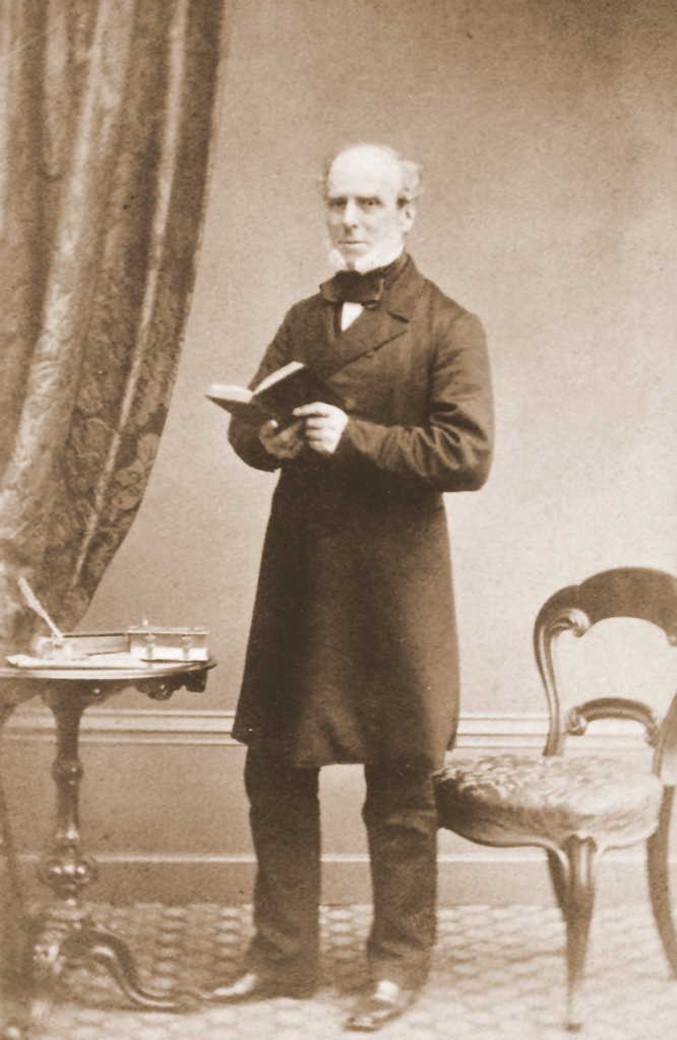 His first curacy was at Grade, a village in Cornwall, and later he became perpetual curate at West Alvington, Devon. He very soon became exercised about his position in the Established Church, and, retiring from it, associated himself in its earliest days with the "brethren movement."

As Mrs. Trotter has well said: "The inspiration came to them at first alone, and not under the influence of large multitudes, neither did it die out, but energised and sustained them in lives of unusual toil and unusual length."

Mr. Hill lived at Plymstock, and there Mr. Darby stayed with him on coming to Plymouth, Mr. Hill having "gathered simply to the Name" before that time. Passing through the crisis of the divisions which arose among these dear people — described as "the Lord's grief, the saints' sorrow, and the devil's glee" — Mr. Hill took his part, as many of the tracts of that time bearing his name testify. He also wrote sacred poetry.

Mr. Hill married a sister of the well-known Mr. H. W. Soltau, and having been born on December 23, 1799, passed away on March 11, 1880, at Bath, in an honoured old age and much respected. One of his sons, also Richard Hill, in happy fellowship with "brethren," was from its inception and for upwards of thirty years Honorary Secretary of the China Inland Mission. He, together with his brother Henry, a valued teacher at the St. Mary Church Meeting, Torquay, have departed to be with Christ, which is far better.

Can anyone give more details on Richard Hill?

What was his course after the 48 division?

Also wondered if the Richard Hill on here, a missionary in Persia, is related? Maybe a grandson ... http://jfredmacdonald.com/worldwarone1914-1918/persia-15what-about-persia.html

He is another one buried in Kensal Green cemetery.

Found the following little bit on Ancestry which gives some more info on him;

Richard was born at Carwythenack in Cornwall.

After leaving Oxford University, he was giving a living and became a Clerk in Holy Orders, Patron of St. Keverne in Cornwall and vicar of West Alvington, near Kingsbridge in Devon.

However, a some years later, impressed by the new evangelical mission of John Nelson Darby and disillusioned with the Church of England, he resigned the priesthood and sold his patronage to his cousin Frederick Hill of Helston. After leaving West Alvington he moved to Plymouth with his family in order to help form the Plymouth Brethren.

Sadly, his wife Frances died in 1846. Leaving him with seven living children (Mary died in infancy). Then in 1849, after a rift amongst the Plymouth Brethren, he married Henrietta Soltau (sister of Henry William Soltau, leading member of the Plymouth Brethren) and moved to Exmouth, where they continued to live for some years.

He died in London and was buried in Kensal Green Cemetery with his second wife Henrietta.

This is Hill's entry in Alumni Oxonienses:

And this is from the National Probate Calendar:

So Pickering was wrong when he wrote that Hill died at Bath ...

My guess is that someone saw the name Lansdowne in the address and thought it was (like the famous Lansdowne Crescent) part of the Bath suburb. Richard Hill's son Richard Harris Hill was an architect who married Agnes Soltau, and like H W Sotau (in his later years) was a keen supporter of Hudson Taylor and the CIM. There are some details in my Elusive Quest but they are in the chapters that deal with the Soltau family.  Richard Harris Hill (born c. 1837) appears to be yet another example of early Brethren giving their children a second given name that was the family name of a respected minister in their assembly.  James Lampen Harris was Newton's respected c0-worker at Plymouth in the late 1830s.  Timothy Stunt

Hope it's ok to reproduce the little paragraph from Elusive Quest here ..

His second wife Henrietta Amelia died just 23 days after him:

There may be more to the error concerning Bath than we realise. Richard Hill had moved to the Bath area by 1861 and his address in the 1861 and 1871 census is in Camden Crescent, Walcot (a North-East suburb of Bath). Evidently he lived there for more than ten years. For the record, in 1871, he reverts to describing himself as an 'ex clergyman' and in addition to him and his (second) wife (nee Soltau), the household included three unmarried daughters (aged 40, 38 and 36, all born in West Alvington, before RH moved to Plymouth. Also staying with them is their niece, Mary Amelia Soltau who later married the very successful civil engineer Theodore Gribble (who took her to the USA and Hawaii [see Elusive Quest 290f]). They also have no fewer than four female servants (1 nurse, 1 cook, 1 parlourmaid and 1 housemaid...) Timothy Stunt

A few more details of Richard Hill’s origins may be found here:  Charles William Boase [ed.], Registrum Collegii Exoniensis: Register of the rectors, fellows, and other members on the foundation of Exeter college, Oxford. With a history of the college and illustrative documents, (Oxford: Oxford historical society, 1894) 216  [https://books.google.com/books?id=EPRAAAAAYAAJ]

For Richard Hill’s siblings  see:  C.S. Gilbert, An Historical Survey of the County of Cornwall to which is added  a complete heraldry of the same,2 vols (Plymouth 1820) ii 260  https://books.google.com/books?id=Ers4AQAAMAAJ   Timothy Stunt

Sunday, Aug 12, 2018 : 03:51
Marty said ...
Another Richard Hill with a son named Richard, from "Echoes of Service" 1910.
"Fallen Asleep.—Nov. 13th, 1910 at Jersey City, N. J. , U.S.A., RICHARD HILL, in his 70th year. Mr. Hill was led to Christ in 1859, and his life was characterized by the fervour of that time. During the greater part of these 51 years, he gave himself entirely to the service of the gospel, first in this country (England) and then in America. He was taken with a stroke the day after returning from a three-days' conference, and after four days he departed to be with Christ, his wife, three of his four sons and his five daughters all surrounding his. bed. The only one absent was his son Richard, who is in Russia and from whom a letter appears on page 466. He will greatly feel his father's death.
The son who writes says, " He left us a legacy of a life of faith and trust in God, with uniform fidelity to the truth as he saw it and devotedness to Christ, which is of more value than worldly possessions."
Monday, Feb 18, 2019 : 09:58
Jon said ...
My grandfather's name was Richard Hill. He came to the United States from England. He was married and had 5 children. My mother was one of his children and her name was Katherine Lauber. I did know my grandmother because she died when I was too young. My grandfather was a missionary in Russia and my mother and her twin sister were born there. He then came back to Brooklyn, NY and ran a school for missionaries before they went on the mission field to help prepare them. As a result of a stroke he died in 1967. His walk with the Lord was incredible. Next to my father, Hermann Lauber, he was the the greatest example of what it meant to follow the Lord I have ever known. By the way he was a huge Brooklyn Giants baseball fan.
Sunday, Feb 9, 2020 : 09:54
Holly Gorman said ...
My grandfather Richard Hill was born in Russia while his father Richard Hill was doing missionary work there. I never met my grandfather as he passed away the same day my older sister was born in 1970. I know he was an attorney. My father was William (Billy) which was one of Richard Hills’ three sons. I would love to know more family history and meet any distant relatives.
Wednesday, Apr 15, 2020 : 00:24
Tom said ...

This from Neatby sugests RH went with JND at first.

55 An anonymous tract, dated January 29, 1846 (conjecturally attributed to Richard Hill, a seceder from Ebrington Street Chapel of Darbyís party), states that Darby came to Plymouth, ìit appears with no intention at allî. This quaint phrase probably means ìwith no definitely formed planî. The writer was contradicting the assertion that Darby saw that Plymouth was the centre of opposition to his views, and came ìto break it upî; and proceeds: ìHis own remark to me, in disavowing such a previous intention is: ëpeople have no idea that one cannot venture to act without the Lord, and that one has no plan but to do His will, as one may discover ití.î This is a rather bold assumption of spiritual superiority, though quite in keeping with a great deal of Darbyís writings. Whether Darby was entitled to make such a claim, the reader must judge from the sequel. It does not seem to me to affect the statement I have made in the text, for it is not likely that Darby should have come with a definitely shaped plan. He came apparently to raise a fresh ìbarrierî against the tide of clericalism, and also (beyond a question) of Newtonian doctrine. No doubt it was left to circumstances to determine the rest.

Saturday, Oct 3, 2020 : 17:15
Maggie Dempster said ...
My grandfather was Richard Hill and he was a missionary in Persia and Russia. My mother, Dorothea was born in Tiflis in 1911. To Holly Gorman, her brother was Richard and might be your grandfather. He was a lawyer (went to Columbia Law school) and lived in Long Island or New York.
Tuesday, Jan 19, 2021 : 09:04