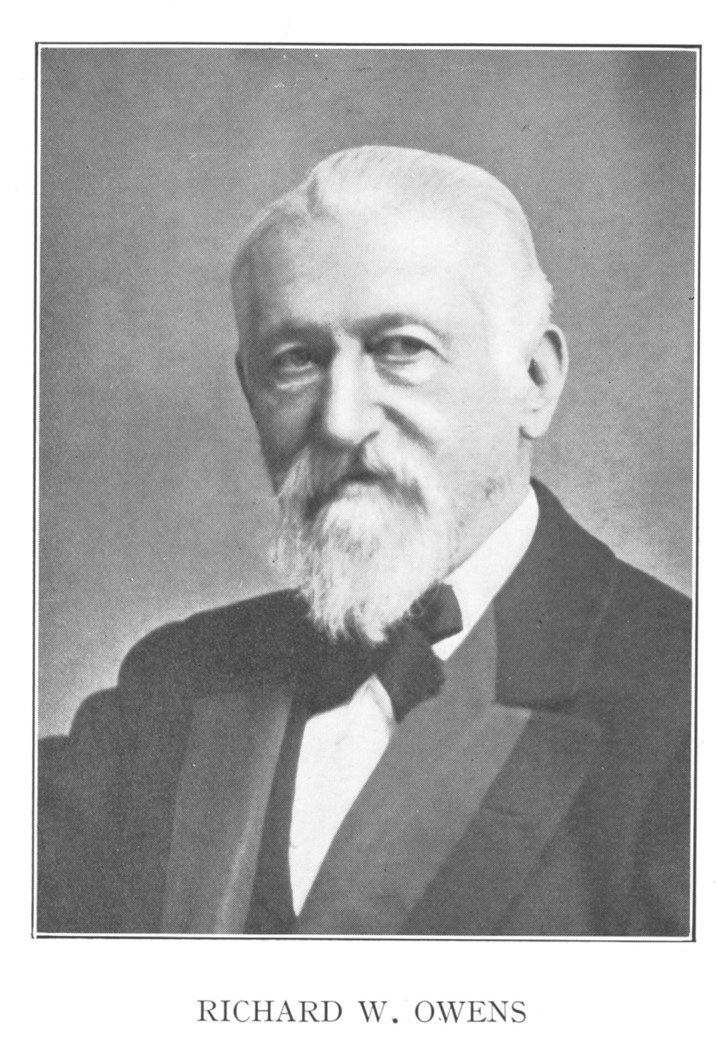 RICHARD W. OWENS was born at Enniscorthy, County Wexford, Ireland, on December, 1842, and was brought to know Christ as his Saviour and Lord in the great 1859 Revival. When a youth he was apprenticed to the drapery trade in Dublin, and was associated for several years with believers meeting in the Merrion Hall. During his stay in the Irish metropolis he abounded in "works of faith and labours of love." Amongst those with whom he was then associated in worship and service was Dr. Thomas Barnardo, the friend of destitute children, whom God so greatly blessed and honoured. Mr. Owens and the Doctor laboured together among the "down and outs" in the slums of Dublin.

In 1871 Mr. Owens went to the city of New York, and in December of the same year was united in marriage to Miss Marion Bunn, a Dublin lady, who was his true helpmeet for 56 years. On arriving in New York City, Mr. Owens identified himself with a small and feeble Assembly of believers meeting simply in the Lord's Name.

He had the true pastor's instinct and heart, and amidst much to depress and discourage, he acted the part of a faithful and tender shepherd. For over 50 years he steadily and persistently sought to encourage and strengthen believers, and help them on in the path of faith. As the work spread, and Assemblies increased in number in and around New York, his counsel and advice was often sought and valued. The "sheep mark"—"by this shall all men know that ye are My disciples, if ye have love one toward another" (John 13. 35)—was abundantly manifest in him.

It was looked on by Mr. and Mrs. Owens as a privilege to be of any service that they could perform to God's beloved people. They "received" or welcomed believers, not on the ground of whence they came, but because of what they were—children of God. Mr. Owens desired "outlets" for truth, not "limits," and sought to "do good unto all men, especially unto those who were of the household of faith" (Gal. 6. 10), and his services were much appreciated. He had a great heart for the Gospel. He was "instant in season, out of season" in proclaiming it; and he did so wherever doors were opened for him of the Lord. In halls and chapels, in tents and meeting rooms of all sorts and kinds, as well as under the blue canopy of Heaven, he delighted to make known the glad and glorious Gospel.

Mr. and Mrs. Owens were greatly "given to hospitality," which was extended to many servants of Christ from various parts of the world; amongst such was the late beloved Harry Moorhouse, Donald Ross, Donald Munro, Alexander Marshall, and numerous others. No more hospitable home ever existed. Then as to his share of meeting believers at the steamers, guiding them through New York, helping them in a hundred ways, who can count up time and talents thus devoted?

On the occasion of their golden wedding, in 1921, in appreciation of their long and invaluable labours, a service of praise and thanksgiving was held, at which Mr. Owens was presented with a purse of gold. As one of his old Dublin friends writes: "He will be missed by thousands of
people in all parts of the world."