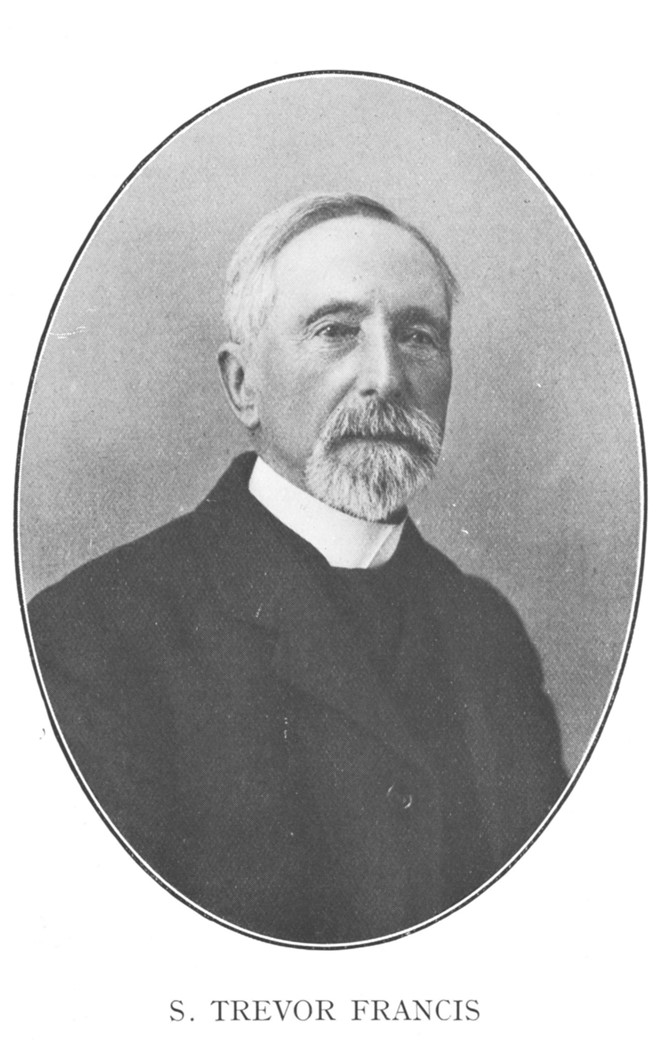 SAMUEL TREVOR FRANCIS was one of the most remarkable of men in that during his lifetime he heard his own songs and tunes sung by congregations, large and small, in many different lands of earth, and even joined in the singing thereof.

His name will linger as a hymn writer for he was the author of "0 the Deep, Deep Love of Jesus," "Eternal Love, Oh, Mighty Sea," "Hark! a Gentle Stranger Knocketh," "Call the Weary Home," "Let me Sing you a Song of Heaven," "Jesus, we remember Thee," "Home of Light and Glory," "Forward, Christian, Forward," "Revive us, Lord Jesus," "I am Waiting for the Dawning," "Oh, for the Meeting in the Radiant Air," "Safe to Land, No Shadows Darken," and numerous other pieces, some of which are found in "Believers' Hymn Book," "Hymns of Light and Love," and most other books. His story must be of interest to all.

Born in Cheshunt, Herts, in 1834, taken while a babe to Hull, stayed when five or six with relatives at Cheshunt, who taught him Bible truths. When nine his father, brother, and himself joined the choir of Hull Parish Church. He soon began to produce poetry, and in a few years he had a volume of poems compiled in his own handwriting. The family having moved to London, he spent twelve months with a doctor in Camberwell. His health failing, he returned to Hull, where a Mr. Akester asked him "if he would like to see a man buried alive, " afterwards explaining that it was a baptismal service, conducted by Andrew Jukes, author of "The Law of the Offerings, " etc. Thus he was introduced to a company meeting on Scriptural lines, and heard the Gospel of Man's Ruin and God's Remedy.

On returning to London, one day, as he was crossing Hungerford Bridge, he halted, and a message was borne into his soul, "You do believe on the Lord Jesus Christ?" At once he exclaimed, "I do believe," and that moment took place the change called "New Birth" (John 3. 3), which revolutionised all his after life. Soon after he assembled with a company in Kennington, commenced open-air preaching, which he kept up for seventy-three years in Britain and all other lands he visited.

Through his preaching during the Revival of 1859-1860 many were led to the Lord. Later he was one of the most willing helpers of Moody and Sankey in their great London campaign in 1873-1874. At times he did deputy for Mr. Sankey in leading the praise. He also helped Canon Hay Aitken in several of his missions, when many churchmen and others were converted.

Impaired eyesight led to his making a tour of the world, so that in his many journeys he was ever cheered by hearing one and another of the words he had penned poured forth in song, in English or other tongues.

Later in life he paid visits to Canada, Australia, Palestine, Egypt, and accompanied R. C. Morgan, the first editor of The Christian, to parts of North Africa.

A collection of his poems which had appeared in The Revival, The Witness, The Christian, Word and Work, Great Thoughts, Life of Faith, and many other papers, was produced under the title of "O the Deep, Deep Love of Jesus."

Dr. THIRTLE, in The Christian, said: "All his poetical work, as well as his spoken word, was permeated by a realisation of the love of Christ, and with a heart desire to see the Saviour's face." Now he realises what he so sweetly penned:

"At Home with the Lord, what joy is this!
To gaze on His face is infinite bliss."