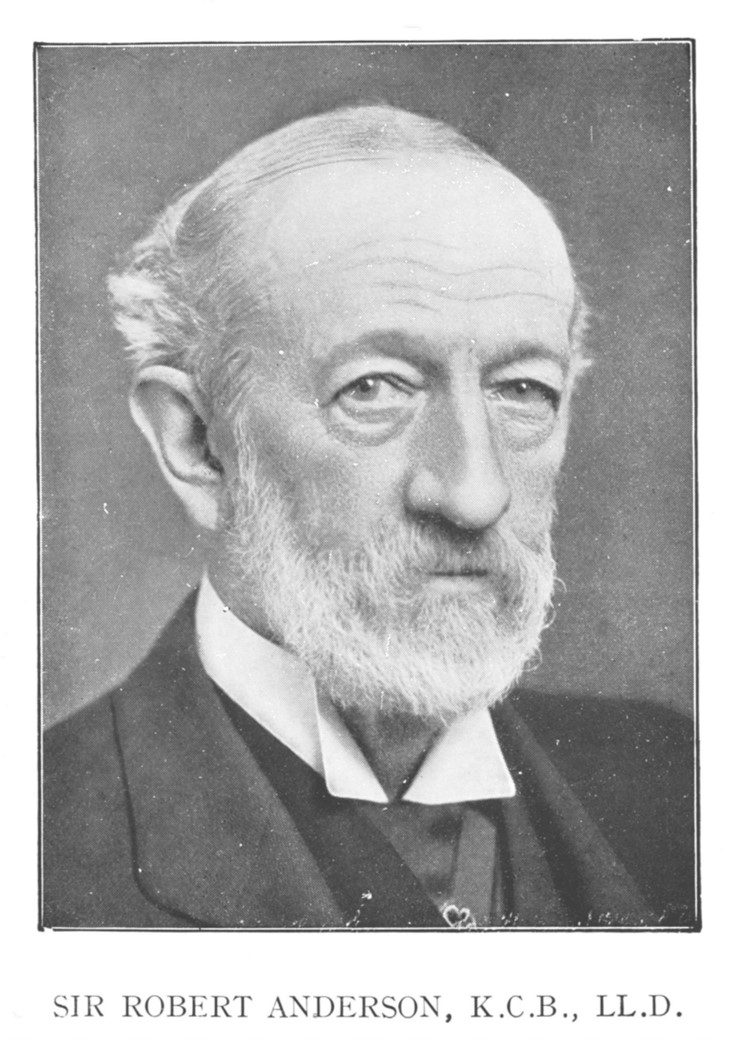 SIR ROBERT ANDERSON, K.C.B., LL.D., though of Scottish descent, was born in Dublin on May 29, 1841. His father, Matthew Anderson, was Crown Solicitor in the Irish Capital, and was descended from one of the "No Surrender" group of Derry defenders.

On leaving school he was given a good opening for a business career in a large brewery; but after eighteen months he turned away from this, and entered Trinity College, Dublin, where he graduated B.A. in 1862 with Moderatorship and medal, receiving the LL.D, of his Alma Mater in 1875.

After studying at Boulogne and Paris he entered Trinity College, Dublin, and in due course was called to the Irish Bar. In 1865 he assisted the Irish Government in treason charges. His special knowledge of the ways of conspirators led to his appointment as Irish Agent at the Home Office, and to his becoming Chief of the Criminal Investigation Department, Scotland Yard, at a time when London was in the midst of the "Jack-the-Ripper" scare. He directed this work till 1901, when he was made K.C.B. on his retiral. The colleague or friend of Lord Guthrie, Lord Salisbury, Lord Wolseley, Lord Blythswood, Sir Wm. Harcourt, Rt. Hon. W. E. Gladstone, and many celebrities of days gone by. His story told in "The Lighter Side of My Official Life," touching incidentally on most of his work during his thirty-five years of public service, forms in­teresting reading.

W. H. Smith, on the floor of the House of Commons, stated that Sir Robert "had discharged his duties with great ability and perfect faithfulness to the public." Raymond Blathwayt, in Great Thoughts, wrote: "Sir Robert Ander­son is one of the men to whom the country, without knowing it, owes a great debt. "

As an author his name will go down to generations yet unborn. His general books: "Criminals and Crime," "Sidelights on the Home Rule Movement," and "The Lighter Side of My Official Life," dealing mainly with "things present," may not survive, but his theological volumes, dealing with "things eternal," will remain.

Among his many books, "The Gospel and Its Ministry" is the best known; "Human Destiny," which C. H. Spur­geon describes as "the most valuable contribution on the subject I have seen;" "The Silence of God," the "book which astounded religious Europe" and helped many during the Great War; "The Coming Prince," which deals with the 70 weeks of Daniel; "In Defence," "Daniel in the Critics' Den," "The Hebrew Epistle," "The Honour of His Name," "The Bible and Modern Criticism," "Misunder­stood Texts," and other volumes, indicate how prolific his pen and industrious his life. Almost his latest, and cer­tainly his sweetest volume, "The Lord from Heaven," was highly commended by the Bishop of Durham, Dr. Griffith Thomas, Miss Catherine Marsh, and many others.

The two main points in Sir Robert Anderson's books which made then readable and profitable were the strength and certainty of his own beliefs and the clearness of their expression. "Amidst all the weakness and mystifying," said Sir Hugh Gilzean Reid, "it gives one hope to read your strong words." "Your writings are specially helpful to me," wrote a very old friend, Mrs. Pery-Knox-Gore; "there is always in every chapter that which you must either accept or reject. You must stop and think, and not pass on un­heeding."

When in Dublin he attended Merrion Hall. For some time in London he assembled with believers in Camberwell and other parts. A few months before his death he ex­plained to the writer that he would have been much more with "brethren" in later years but for the question of minis­try. The "open meeting," with its many abuses, did not naturally appeal to such an orderly mind. Yet his heart was ever there. His ministry at the Half-Yearly Meetings in Glasgow was greatly appreciated.

In 1873 he married Lady Agnes Moore, sister of the Earl of Drogheda, a true help-meet in every good work, and a leader in many branches of women's work in London.

Now, what was the secret spring of this mighty man of valour? Here it is as given by himself not long before his Home-call:

He had been brought up in a Christian home, and had led what is known as a religious life, with occasional transient fits of penitence and anxiety; but in 1860 the conversion of one of his sisters through services held in Dublin by J. Denham Smith awakened new spiritual longings. He was persuaded to accompany her to one of these meetings; but the light came the following Sunday evening through a sermon in his own Church. The preacher was the Rev. John Hall (afterwards of New York), who "boldly pro­claimed forgiveness of sins, and eternal life as God's gift in grace, unreserved and unconditional, to be received by us as we sat in the pews. His sermon thrilled me," Sir Robert said when describing the event, "and yet I deemed his doctrine to be unscriptural. So I waylaid him as he left the vestry, and on our homeward walk I tackled him about his heresies . . . At last he let go my arm, and, facing me as we stood upon the pavement, he repeated with great solemnity his Gospel message and appeal: 'I tell you,' he said, 'as a minister of Christ, and in His Name, that there is life for you here and now if you will accept Him. Will you accept Christ, or will you reject Him?' After a pause - how prolonged I know not - I exclaimed, 'In God's Name I will accept Christ.' Not another word passed between us; but after another pause he wrung my hand and left me. And I turned homewards with the peace of God filling my heart."

After an attack of influenza, he in measure recovered, sat working till 10.30, retired to rest, and at 11 quietly passed into the presence of the Master whom he loved on November 15th, 1918, in his 77th year.

samuel said ...
His "Criminals and Crime" is an interestering read. Would do Theresa May some good if she understood it. Also his "Sidelights on the Home Rule Movement" is an important book re the Fenian crisis in late Victorian London -- he saved Queen Victoria's life from thwarting a bomb plot against her at her Golden Jubilee (see "Fenian Fire" by Christopher Campbell).
Thursday, Aug 30, 2018 : 17:41
john zachary said ...
Do you have a link page?

I am writing a series entitled: Expect to Live Forever
Please check out the link to this e-book on Amazon. The printable is also available. In January, an audio version is expected to be released.

john
Tuesday, Dec 10, 2019 : 14:17
Mr Gerald Bolsover said ...
I am 82 years old, and was given a copy of The Coming Prince at the tender age of 17, then The Lord From Heaven, and many other of Sir Roberts books. I was encouraged to study these in depth, this I did believing implicitly that was was written was the truth. Only after some years was I challenged regarding what Sir Robert had written in the Coming Prince, and so I set out to check What saith the Scripture, and found that many things were not as
Clear as Sir Robert claimed, and I have put all my findings in a readable form under the title
“An answer to The Coming Prince”, and afterwards his work Forgotten Truths, my answer is “An answer to Forgotten Truths”, if any one is interested I will send them a copy of one or both via email. May our God and Father open the eyes of any who want to compare spiritual with spiritual. I love the book The Lord From Heaven, and thank God for its uplifting content.
Yours in Christ Jesus G Bolsover
Saturday, Feb 12, 2022 : 01:46
Syd said ...
Hallo Gerald. Your comments are intriguing. I know both books, and have always taken careful note of Anderson's chronological reasoning on Daniel's seventy weeks, the birth and crucifixion of Christ, and his exegesis on other matters. I would be keen to read your comments. My email is sydkwar@gmail.com. Thanks. Christian greetings. Syd
Saturday, Feb 12, 2022 : 03:06
Hal said ...
Hi Gerald, I would be interested to read your works “An answer to The Coming Prince” and
“An answer to Forgotten Truths”.
my e-mail is
hspromm@gmail.com
Monday, Feb 21, 2022 : 20:51
Syd said ...
Hallo Tom. We were hoping for a reply from Gerald Bolsover (see above), but nothing so far. Do you have his email address please. You could send it to me (sydkwar@gmail.com) instead of publishing it on the website; Hal (above) also asked for it. Gerald did invite those interested, so it shouldn't be a problem. Thanks brother.
Saturday, Mar 5, 2022 : 14:17
Tom said ...
Have sent it to you.
Sunday, Mar 6, 2022 : 01:52
Adriano said ...
OI BOA NOITE, Se você puder passar pra mim seu raciocínio sobre estes dois livros por e-mail eu agradeço sou pregador e goto de ver os dois lados, gradeço que Deus abençoe fico aguardando
Wednesday, May 4, 2022 : 06:49
Maurice said ...
Hi Gerald,
I am also interested in reading your works, "An answer to the Coming Prince" and "An answer to Forgotten Truths."
Blessings,
Maurice
Monday, Jul 18, 2022 : 08:23
KELLEY CHIC ANDERSON said ...
I WONDER IF I'M RELATED TO SIR ROBERT ANDERSON.
Tuesday, Aug 2, 2022 : 05:38
jeff said ...
Gerald I would like to be f book friends and learn more of your works. A reply to Forgotten truths and the coming prince by Anderson. Please my e mail jbartalo@yahoo.com
Thursday, Oct 20, 2022 : 00:55