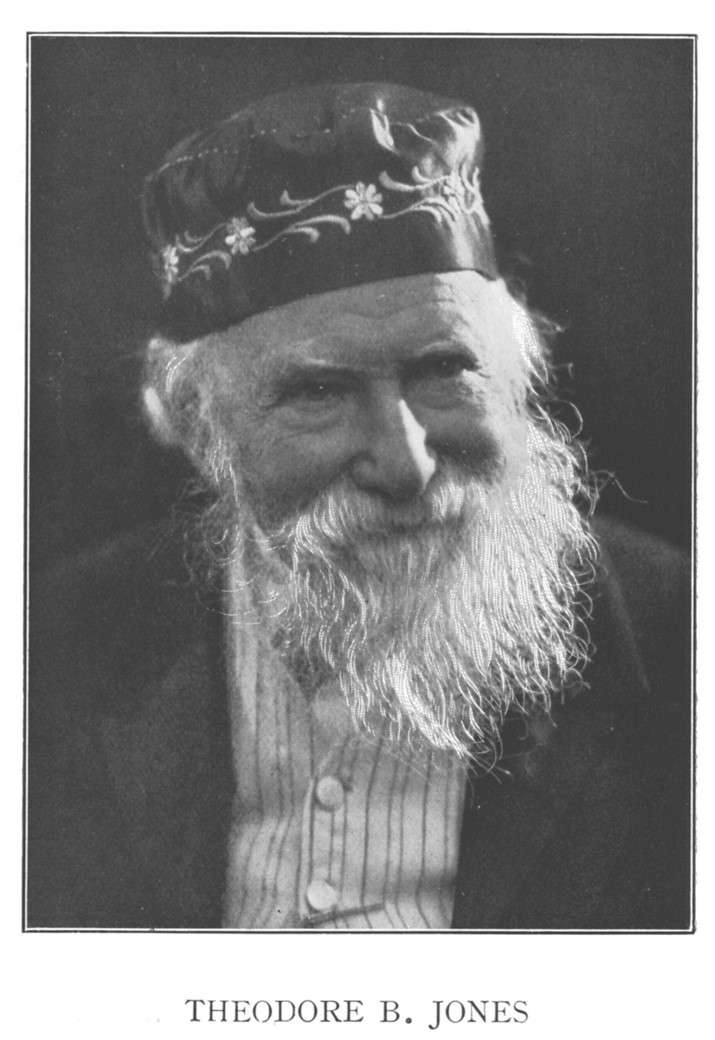 THEODORE BROOKE JONES, a patriarchal saint, passed into the presence of his Lord on 21st October, 1920, at the ripe old age of 93 years. We know few details of his early days, but of this we have assurance that he was saved by the grace of God among the Wesleyan's in his boyhood.

He could remember the days when London was lighted with oil lamps, and when the omnibuses began to run in that city. His business as a chartered accountant took him into the society of many a wealthy and noble family, but he never failed to own his Master. In the origination of the Y.M.C.A. movement in London, under Sir George Williams, Mr. Jones was a member of the first committee, and it was the perception by him of the possibility of the Lord's people meeting in such an undenominational way that led him to seek the fellowship of saints gathered in His Name alone. But it would be impossible for us to note all the connections which he had with great men of God during the middle years of last century. Of these we may note that the saintly Dr. Andrew Bonar married Mr. Jones in March, 1860, and he treasured a letter which that noted servant of the Lord sent to him immediately after the event. On removing to the Clapton district Mr. Jones came into touch with Mr. John Morley (brother of Sir Samuel Morley, M.P.) and with the Christians meeting in the Iron Room, from which they moved at a later date to Clapton Hall, built by Mr. Morley.

A remarkable incident regarding the beginning of this fellowship is told in "Footsteps of Truth" (March, 1896). One evening at a meeting of Christians in Mr. Morley's house, the latter, addressing Mr. Jones as a welcomed newcomer, begged leave to remind him that it was understood among them that no one would enter on the controversial subject of believers' baptism. To this Mr. Jones, in his quiet but forceful way, answered, as he held his Bible in one hand and struck it with the other, "Well, Mr. Morley, if there is any subject within the covers of this Book which is to be systematically ignored by us I can have no fellowship with you." So impressed was Mr. Morley that with candour he immediately replied, "Jones, you are right." Soon afterwards Mr. and Mrs. Morley were immersed as believers, and a baptistery was put into the new hall at their expressed wish.

Some fifty years ago Mr. Jones resolved to go to Harrogate to live, where there was no meeting. Before long his shining light drew several Christians together, and these he induced to meet on the first day of the week at his home to remember the Lord's in the breaking of bread. From that nucleus arose the Assembly in that place. It was not long till the Standard of the Cross was also unfurled there through his instrumentality, and till his later years, when physical disability forbade it, his heart and soul were in the active work of the Lord.

Mr. Jones was neither a preacher nor a teacher, but the patient, unobtrusive labour which he undertook, the gracious comfort which he imparted, the permeating godly influence which all felt, and personal and financial burdens which he quietly and ungrudgingly bore for the Lord's sake' are known only in full to Him for whom his all was laid upon the altar. He could remember, with lively interest, intercourse with the world's great men, including Mr. W. E. Gladstone, but it never affected him for ill. He was a man filled and clothed with humility and grace. To the castle of a great client he was invited that he might tell of his confident trust in God and his sure hope for the world to come. In business, as one of his business friends wrote, his glowing characteristic was his contempt for filthy lucre.

Residents and visitors alike bear testimony to the experience of his beautiful, even ever cheerful, personality and his walk with God. The children used to run to him when he was walking in his last days to hear the kindly welcome and his words of love, and on every one with whom he came in contact, of all classes and creeds, he left one impression, "He was a true man of God." When his daughter asked whether "he minded being old," he answered beautifully and characteristically, "Why mind, my dear, my steps are ordered by the Lord. " Here is the secret of the Christlike life; he lived in the consciousness of the Father's loving smile and presence.